Hamilton and Bottas got on well during their first season together as team-mates, resulting in a change of atmosphere at Mercedes after the tension of three years of title fights between Hamilton and Nico Rosberg.

Wolff made it clear that he wants to have both of his drivers in contention for the championship in 2018, as that will help to raise the level of the whole team, even if it proves difficult to manage.

"I don't think we need to avoid a stressful situation," said the Austrian.

"We need to acknowledge that, if two team-mates can fight for race wins and a championship, that this will be a rivalry.

"And we need to be conscious and acknowledge that that is the case.

"But like everywhere in life you want to have the mix of both, probably the recipe for success."

Wolff praised Bottas for turning his 2017 season around - ending the year with pole position in Brazil and victory from pole in a straight fight with Hamilton in Abu Dhabi - after a difficult run of races prior to the summer break. 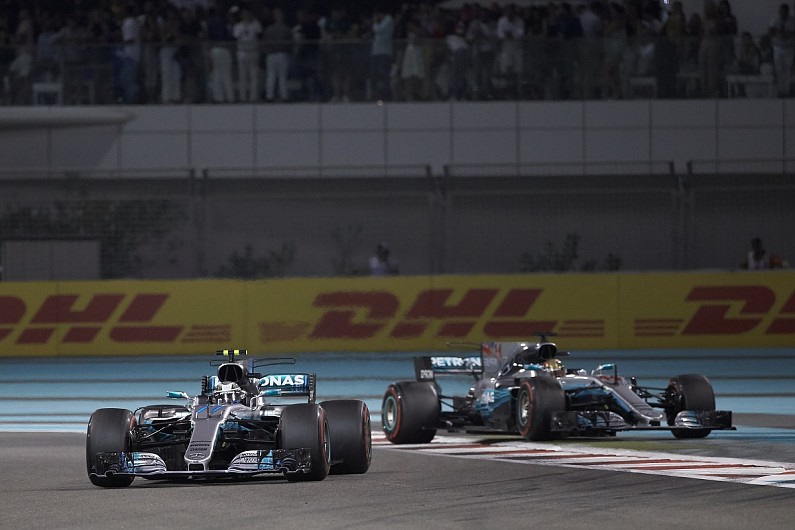 "The best ones are the ones that recover from bad moments," he added.

"Maybe in a few years we will look back and say this was an important moment for his racing.

"The only thing we can do as a racing team is to stay transparent and fair to both of them, support them where we can, but eventually they are alone in the car, and Valtteri pulled himself out of it."

Wolff said that heading into the winter on the back of a victory was the perfect scenario for Bottas.

"[It was] very important, because he had a very strong qualifying session and a very strong race that he was in control of all the time, fair and square racing between him and Lewis," he said.

"Carrying positive momentum with the race win through the winter, after a difficult time, is probably for him just what the doctor ordered.

"He's a hard Finn. I could never see, visually, that it was impacting him - he said that, but I think with the strength of his character, he crept back.

"And every race, there was better performances. In Brazil the qualifying was good, the race less so, but he knew that, and then he delivered an exceptional weekend in Abu Dhabi."