The Singapore Grand Prix will stay on the Formula 1 calendar until at least 2021 thanks to a fresh four-year agreement.

The new deal was announced by F1 on Friday, with the Singapore GP promoters, the Singapore Tourism Board, and Liberty Media combining to keep the championship's first night race on the calendar for another four years.

"The Singapore Grand Prix is a signature Formula 1 race and therefore we are very pleased that it will continue to feature on the calendar for a further four years," said F1 chairman and CEO Chase Carey.

"The first ever night race in this sport is one of the most thrilling events of the year, taking place against the stunning backdrop of Marina Bay.

"We are looking forward to offering our continued support to make the next four years even more spectacular and exciting." 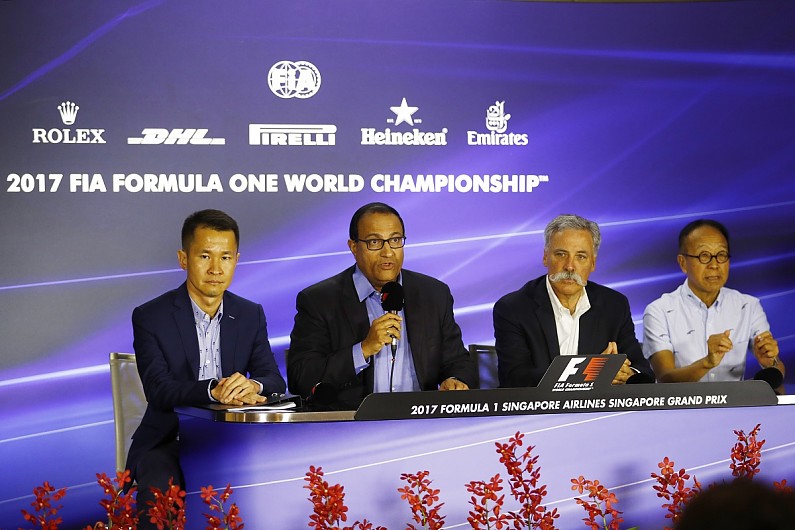 According to the announcement the event has delivered a "year-on-year plus 19%" improvement in ticket sales, with Singapore's Minister for Trade and Industry S Iswaran emphasising the importance of the race for the city.

"The F1 Singapore Grand Prix has generated significant benefits for our economy as well as the Formula 1 franchise," Iswaran said.

"With its global viewership and media coverage, the race has reinforced Singapore's image as a vibrant and innovative city to a wide international audience.

"It has also created good opportunities for Singaporeans and the local business community.

"We look forward to the continued support of all Singaporeans as we work with Formula 1, Singapore GP, and all stakeholders, to ensure the F1 Singapore Grand Prix remains an event that we can all be proud of."

Although no figures for the new race fee were revealed, Iswaran said the overall cost of the event had come down to S$135 million per year - 60% of which came from government contributions. It has been reported that the previous cost was S$150.

This weekend's race will be Singapore's 10th grand prix, with the event having made its debut on the calendar in 2008.

Although there had been talk in the past of the track layout being changed to take in a different area of the city, Iswaran said that no plans for any such alteration were being considered at the moment.