The race, though, will be remembered for Alonso walking away from a lap-17 shunt in which his McLaren ran into the rear of Esteban Gutierrez's Haas, slammed into the wall and then rolled violently through the gravel trap, forcing a red flag and a 20-minute stoppage.

Following the damp squib of qualifying, which will revert back to the old format from the Bahrain GP after an urgent meeting of team principals and managers prior to the start, the race overall was a shot in the arm for F1, despite the latest Mercedes one-two.

It started with Vettel majestically scything his way between front-row duo Hamilton and Rosberg to take the lead into the first corner.

Behind the four-time champion, Rosberg edged Hamilton wide at Turn 1, and doing so allowed Raikkonen to nip through on the inside to claim second.

Hamilton was relegated to sixth behind not only the Ferraris and Rosberg, but also Toro Rosso's Max Verstappen and Felipe Massa's Williams.

It took four laps for Hamilton to overtake the Williams, and though soon up behind Verstappen he was unable to get close enough to pass, which allowed the leading trio to pull away by the first round of stops.

The tyre choice was fascinating as Vettel and Raikkonen remained on super-softs, while Rosberg switched to softs, with an adrift Hamilton on mediums as Mercedes tried to get him to the end of the race on a one-stop strategy.

The race was then transformed with the crash involving Alonso and Gutierrez, with all cars returning to the pits and many taking advantage of the red flag to change tyres. 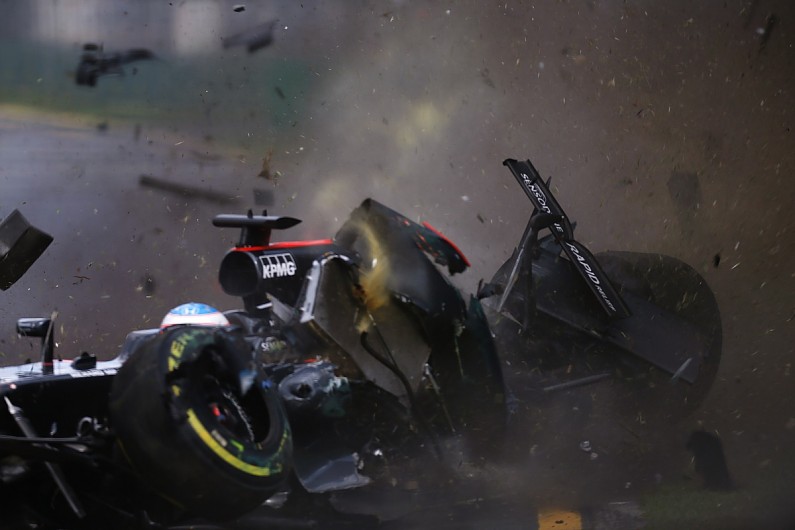 Rosberg followed Hamilton onto mediums, but the Ferraris stuck with super-softs and Daniel Ricciardo and the Toro Rossos softs as they restarted behind the safety car in the order Vettel, Rosberg, Raikkonen, Ricciardo, Verstappen, Carlos Sainz Jr, Hamilton and Massa.

Raikkonen soon retired from third, his Ferrari appearing to suffer a power-unit failure, leading to flames emerging from the engine cover as he stopped outside his garage.

Vettel could not pull away sufficiently on his super-softs and pitted on lap 35 of 57, handing the lead to Rosberg.

Hamilton was elevated to third by Vettel and the Toro Rossos stopping, then moved down the inside of the soon-to-pit Ricciardo for second with 16 laps to go, leaving him 10s behind his team-mate.

Rosberg managed to hold his ground over the closing laps to clinch his 15th win in F1.

A small mistake by Hamilton on lap 51 brought Vettel into play for second, but the champion kept his rival at bay to claim the runner-up spot, helped by the Ferrari locking up and running onto the grass at the penultimate corner with two laps to go.

Ricciardo claimed fourth, followed by Massa, with Romain Grosjean scoring points for Haas on its debut, the first new team to do so since Toyota with Mika Salo in 2002.

Grosjean benefited from being able to make his sole tyre change under the red flag, meaning he effectively completed the race without pitting.

Force India's Nico Hulkenberg was seventh, followed by Valtteri Bottas for Williams, both unable to pass Grosjean despite following the Haas for half the race.

Sainz and Verstappen caught this group after their pitstops, and had a minor clash near the end that resulted in a spin for Verstappen.

Neither Renault scored on the works team's return - Jolyon Palmer 11th and Kevin Magnussen 12th after a first-lap puncture.

For the second successive year in Melbourne Daniil Kvyat retired before the start, with the Russian's Red Bull grinding to a halt just behind the safety car as the grid formed.