In the months ahead of the launch of the McLaren MP4-30, there was a huge amount of speculation surrounding the technology of the new Honda Formula 1 engine.

It's been a troubled start so far, with pre-season testing a disaster and McLaren battling to make up ground in the early flyaway races.

A lot of these reliability problems are the result of Honda trying to steal a march on its engine rivals by incorporating new and unproven technology, as, with in-season development limited, it did not want to start 2015 with a basic power unit set-up that would be hard to improve.

McLaren went aggressive with the aerodynamic concept on this year's car, and that put pressure on Honda to achieve the packaging required for the Woking team's 'size zero' dimensions.

Over the Bahrain Grand Prix weekend, the ongoing problems on Jenson Button's car allowed us to get the first clear look at the Honda unit, showing just how radical the Japanese firm has gone to achieve minimal volume with its packaging.

Honda has split its turbo, but the way it has done so is different to Mercedes, as the turbo sits within the tight confines of the 'V' of the engine, along with the MGU-H.

To fit a turbo into this space, it appears that Honda has pioneered the use of an axial flow compressor.

Rather than a large centrifugal fan, there are a series of smaller fans along a shaft.

This design spins up quicker, although it may lack the maximum possible boost, which is not such an issue in this fuel-limited formula.

Aligned on the same shaft as the compressor is the MGU-H and the exhaust-driven turbine; the latter appears to sit behind the engine and is of a more conventional design. Honda hopes to improve driveability and reduce the size of the envelope of the engine with this layout.

Above the turbo is a compact, low-line aluminium inlet plenum chamber. Inside, the inlets are turned through 90 degrees to reduce the height of the chamber, while still allowing for variable-length inlet trumpets. 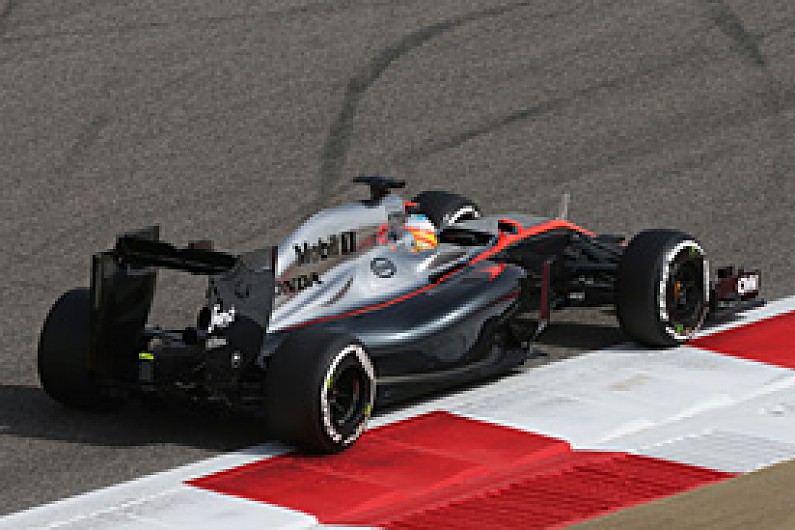 More conventionally, the oil tank and MGU-K are located at the front of the engine and under the left-hand cylinder bank respectively.

Finally, and again unconventionally, the ERS module ahead of the motor combines the battery and both control electronic boxes (one each for ERS-K and ERS-H) into one unit.

This creates a lower and lighter unit that requires less space under the fuel tank area, which again aids aerodynamic packaging.

Of course, all of this tight packaging means that there's precious little space for external cooling.

All of the ERS elements will require water or oil cooling, which has led to reliability problems and Honda needing to cap power to keep temperatures under control and prevent coolant leaks via the seals around the spinning shafts.

Although Honda continues to have reliability problems, the fundamental design of the power unit is valid and will eventually become both powerful and reliable.

That will mean McLaren's aerodynamic packaging gains can be fully realised.