Williams driver Bottas - fresh from clinching fourth in the F1 drivers' championship with a podium finish in Sunday's Abu Dhabi Grand Prix - leapt to the top of the times with a morning run on super-soft Pirelli tyres.

The Finn's benchmark lap of 1m43.884s around the Yas Marina circuit remained unbeaten for most of the afternoon, until he went back out and lowered it to a 1m43.396s best with 15 minutes left of the session to run.

Fellow Finn Kimi Raikkonen lapped his Ferrari within 0.004 seconds of Bottas's morning pace with a super-soft run of his own in the afternoon, as new signing Sebastian Vettel watched on in the Scuderia's garage.

Raikkonen's time remained good enough for second spot, ahead of the Mercedes of championship runner-up Nico Rosberg, who completed more laps than any other driver on day one, racking up 114.

The eagerly anticipated appearance of McLaren's Honda development car, dubbed the MP4-29H/1X1, was delayed until the afternoon by electrical problems, and the car had a troubled time when it did appear. 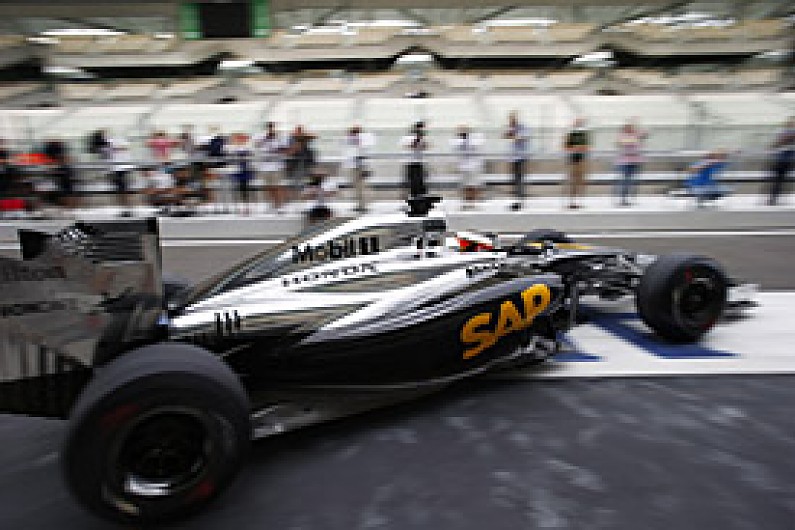 Reserve driver Stoffel Vandoorne coasted to a halt at his pit following an installation lap and then caused the penultimate red flag of the day when the car broke down on-track with around two hours of the test remaining.

The car appeared once more in the final hour before pulling back into the pits for good with just three laps in total under its belt.

Engine problems restricted Palmer to just 37 laps on his F1 debut, but he returned to the track in the final hour and jumped ahead of the Red Bull of Formula Renault 3.5 champion Carlos Sainz Jr and the Caterham of Will Stevens, who rounded out the top six.

Lotus reserve driver Charles Pic was seventh fastest, ahead of Sauber debutant Marcus Ericsson and Red Bull prodigy Max Verstappen, who completed just two laps in the morning before crashing his Toro Rosso three corners from the end of his third tour.

The team said the front suspension failed on the car, pitching the Dutch teenager into the wall.

He also caused the final red flag of the day when his engine stopped on-track with 12 minutes of the session remaining.