Williams would have ordered Valtteri Bottas to let Felipe Massa back past him at the end of the Malaysian Grand Prix had the Finn failed to pass Jenson Button.

Massa, who was running seventh behind Button, was ordered to let his team-mate pass to allow Bottas to challenge for sixth place late on, but refused to do so.

Williams chief test and support engineer Rod Nelson explained that the situation would have been reversed had Bottas not been able to do what Massa had already proved unable to and passed the McLaren.

"He [Massa] did not do what we would have preferred him to do," said Nelson.

"Felipe was running fairly high temperatures on his engine and we were a little bit concerned about it, and Valtteri had much fresher tyres than Jenson did.

"We thought that it would be good to give Valtteri a go at getting past Jenson.

"Then, if he hadn't achieved that within two or three laps, we would have swapped our drivers over again and everyone would have been happy.

"It's not a big deal, every team does it.

"It's not team orders, it's a strategic decision based on the relative performance of both cars.

"The facts are that we felt Valtteri stood quite a good chance of getting past Button because his tyres were younger and we felt that Felipe was compromised.

"If you look at the TV [coverage] you can see him pulling out to the right-hand side to try to cool the right side of the car, which was something that Valtteri didn't have to do."

Nelson also stressed that while situations like this draw attention on the outside, there is no set hierarchy within the team. 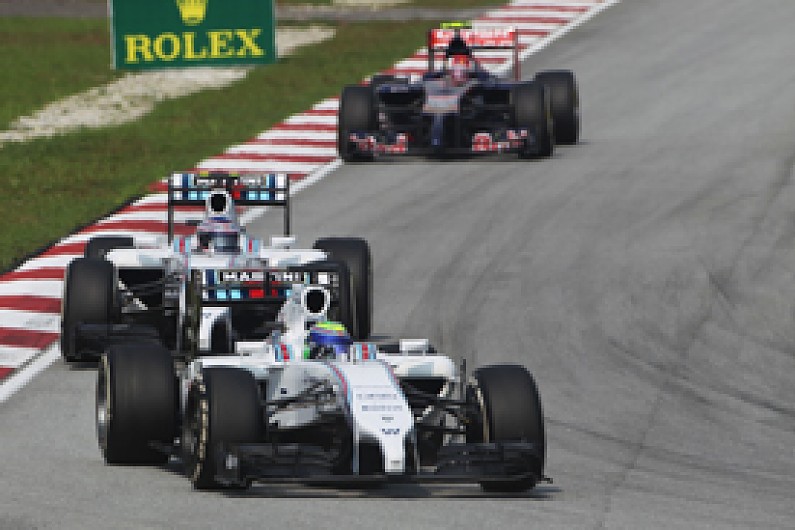 Earlier in the race, Massa had benefited from team instructions when Bottas was told to stay behind him in the first stint despite the Finn believing he was faster.

"There is always something you do that causes a fuss, but it's straightforward and the way that we work.

"There's nothing else going on in the background, we don't want to put one driver down and one driver up, we don't have team orders in that respect.

"At Williams, we don't run like that. It's not like other teams where they have a number one and a number two, we have two number one drivers.

"We will go through everything with the drivers tonight, discuss the situation and what we expect."