The pair were wheel to wheel repeatedly in the closing laps before Vettel broke clear - despite the team having ordered them to hold station with Webber ahead.

Just behind them,team instructions were also a flashpoint between the Mercedes team-mates, before Lewis Hamilton - who had been a lead threat for a spell - led home Nico Rosberg.

Fernando Alonso's bid for victory ended early, when he crashed out having sustained wing damage nudging Vettel on the opening lap.

Conditions had been wet at that stage following a heavy pre-race shower.

Alonso immediately passed Ferrari team-mate Felipe Massa off the line, resisted Webber's outside-line attempt and attacked Vettel for the lead, but slid lightly into the Red Bull at Turn 2.

That dislodged the Ferrari's front wing, a situation that worsened as the lap went on - though that did not stop Alonso from fending off Webber's repeated probes.

Ferrari stayed out, seemingly hoping to coincide the wing change with a switch to slicks, but as Webber passed Alonso on the pits straight, the Spaniard's wing collapsed and sent him skating into the gravel and out of the race.

Vettel and Webber then ran first and second, swapping positions at the pitstops as Vettel's early change to slicks proved slightly premature.

Webber came under increasing pressure from Vettel in the middle of the race, while the Mercedes began catching them both. 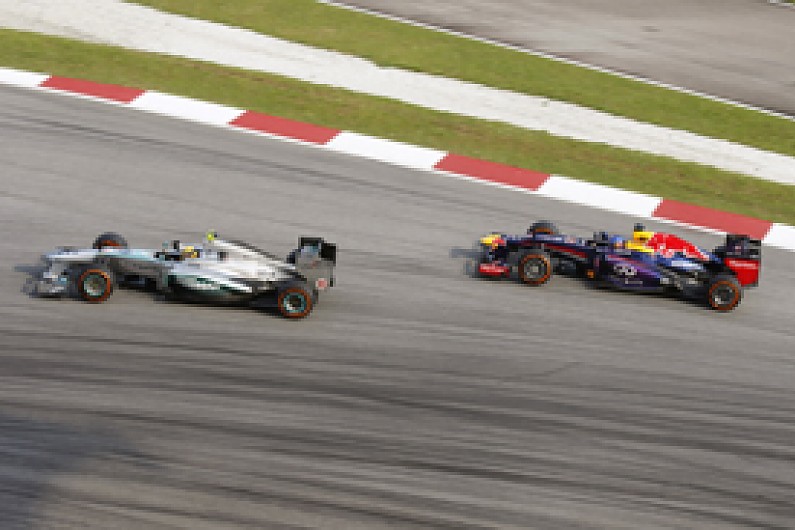 This prompted Vettel to urge the team to get Webber out of his way, but the Australian managed to rebuild a lead and Vettel found himself dropping behind the earlier-pitting Hamilton at the third pitstops.

Hamilton lost pace in the next stint as he had to start saving fuel, allowing Vettel to reclaim second into the first corner.

The world champion then played the early stop tactic at the fourth and final pit visit, which brought him right back onto Webber's tail when the Australian changed tyres.

They grappled wheel to wheel through the first five corners for two consecutive laps, prompting frantic radio calls from a concerned Red Bull pitwall, before Vettel got decisively in front and went on to clinch another win.

The Mercedes had fallen away by that stage and were involved in their own intra-team controversy. After Hamilton and Rosberg swapped places repeatedly in the DRS zones for several laps, they were ordered to hold station and save fuel and tyres, to Rosberg's clear displeasure.

Ferrari had to settle for fifth with Felipe Massa, who recovered to that position after losing ground in the early stages.

That place would have gone to Jenson Button had the McLaren not lost two minutes in the pits after pulling away with a loose right front wheel and having to stop in the pitlane and wait for his mechanics to retrieve the car.

That was one of a wild array of pit incidents, which also included Hamilton mistakenly pulling into former team McLaren's area, both Force Indias having to retire with wheelnut issues, and Charles Pic and Jean-Eric Vergne colliding amid pitstops. 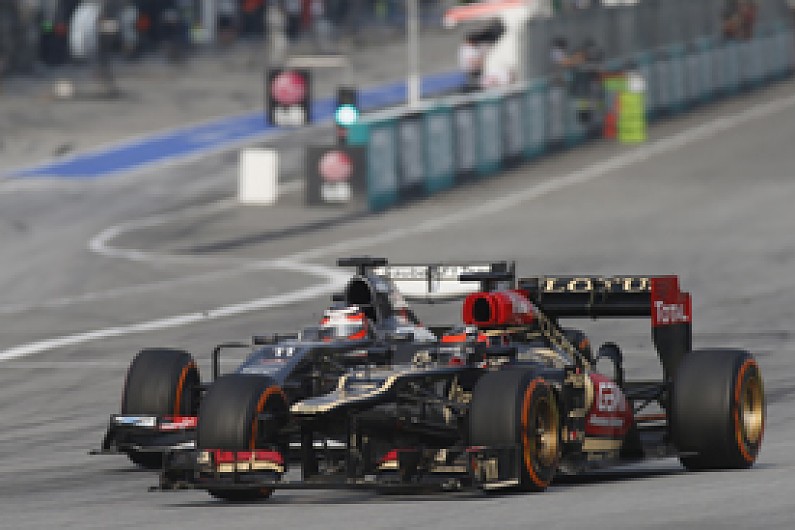 Lotus claimed sixth and seventh with Romain Grosjean and Kimi Raikkonen, the latter having an eventful afternoon that included trips off the road and a bitter battle with Sauber's Nico Hulkenberg, who took eighth.

Sergio Perez was ninth for McLaren, while Vergne held off Valtteri Bottas to give Toro Rosso the final point.