Charles Bradley analyses the run down to Silverstone's new first corner at Abbey with the help of a number of international racers who have already sampled the right-hander. They reckon there'll be fireworks too!

We take a look at the fabulous British Grand Prix trophy collections at Williams and McLaren and uncover some of the secrets behind how they won them, and there's all the regular opinions from grand prix editor Mark Hughes, technical expert Gary Anderson and twice British GP winner David Coulthard.

As if that's not enough, you can expect to find all this in the magazine...

Mark Hughes column - Grand Prix editor Mark Hughes explains how drivers improve as they evolve from F1 rookie to world champion, given the equipment at their disposal. 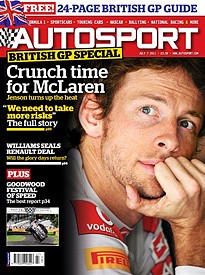 World GT1 Navarra - It's double-top for the All-Inkl Lamborghini Murcielagos, with both cars sharing the honours in Spain.

F2 Nurburgring - Italian Mirko Bortolotti triumphed in both races in Germany, as Ben Anderson watched him move further ahead in the title race.

WTCC Porto - Chevrolet has now won 11 of the 12 races in this year's global tin-top series. This time, Mark Glendenning watched Alain Menu and Rob Huff snare a victory apiece around the Portuguese streets.

IMLC Imola - Peugeot and Audi came together in Italy for the first time since Le Mans last month and this time, the French got the better of the Germans, thank to an imperious drive by Anthony Davidson and Sebastien Bourdais in the 908 diesel prototype.

From the archive - AUTOSPORT columnist David Coulthard recalls his back-to-back victories in the British Grands Prix at Silverstone in 1999-2000, the last time a Brit took a home double.

Race of my life - Argentinian Enrique Mansilla looks back with Henry Hope-Frost on the day, back in 1981, when he beat Ayrton Senna in a British Formula Ford championship thrash at Mallory Park.