The Spanish Grand Prix provided a gripping chase to the flag between Sebastian Vettel and Lewis Hamilton. AUTOSPORT's Mark Hughes unravels the strands of what led to such a close climax to the race around the Circuit de Catalunya - and gave Vettel arguably the hardest of his four race wins to date this season.

Hughes also details how Mark Webber's pole position turned into a distant fourth - thanks to a series of knock-on effects that had their roots in his poor start - and what a miraculous job Fernando Alonso did to hold the lead in a bog-slow Ferrari for so long.

Mark Hughes - Off the track, talk in the paddock was of the hot-blowing exhaust-blown diffusers. First they were illegal, then they were OK again, and now it appears that they will; be illegal in the near future. Not only that, but F1 paranoia as to who had alerted the wider world was at its most rampant. Hughes rubs his hands together and chuckles at the intrigue in his weekly column.

David Coulthard - Our DC won twice at Monaco, so he's the perfect man to look ahead to F1's most prestigious race. He's got an interesting take on the form of the Red Bulls too.

Indianapolis 500 preview - While F1 heads for the glamour of the Monaco Grand Prix, IndyCar has its own biggest race this weekend in an industrial city in the north of the US: the Indianapolis 500. In our full preview, hardcore US racing fan Charles Bradley interviews his old mate Dario Franchitti about the best way around the 2.5-mile superspeedway and details the full starting grid for Sunday's big race while Glenn Freeman chats to comeback man Dan Wheldon. 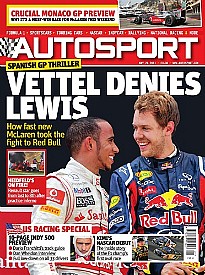 Raikkonen in NASCAR - Also in the US, NASCAR welcomed Kimi Raikkonen to its ranks last weekend at Charlotte, with the Finn contesting his debut Truck Series race. AUTOSPORT's Southern State guru Jonathan Ingram made the trip from Georgia to assess how he did among the Good Ol' Boys.

GP2 Barcelona - Glenn Freeman made the trek to Spain and came back telling us that Charles Pic and Fabio Leimer had won the GP2 races. We told him he was getting confused with 2010. But Glenn was right: somehow the winners were repeated, and he details how Pic's Addax team found the advantage this weekend.

GP3 Barcelona - While he was there, Glenn told us Mitch Evans and Tamas Pal Kiss had won in GP3, and we knew that had to be true as neither drove in the category last year. In fact, New Zealander Evans couldn't compete before this season - at 16 this protege of Mark Webber has only just reached the minimum age to race GP3.

Pau Grand Prix -Just over the Pyrenees from Barcelona was Peter Mills, who watched Marco Wittmann walk away with the reconstituted Grand Prix de Pau F3 race - another victory for the Signature team, which has made the event its own over the years.

From the archive - Johnny Herbert recalls not qualifying for the Indianapolis 500 in 2002.

Race of my life - Olivier Panis looks back at his shock win at the Monaco Grand Prix in 1996.