A lot of the technical talk at recent races has been dominated by the flexi-wing saga surrounding Red Bull Racing and Ferrari.

The FIA introduced new wing deflection tests for Belgium, and further floor tests and rules are coming for the Italian GP.

Although the FIA clampdown quietened down matters in Belgium, watching the Red Bull Racing cars over the kerbs in Spa it was clear that the team's front wing still moved a lot more than that of the McLaren.

I don't believe the Red Bull Racing wings are moving more than the regulations allow, but I do think the team is maximising the movement it can get out of it.

By flexing the front wings in the manner we have seen, it helps produce more medium speed downforce - and it is ultimately a better stall-controlled wing. It flexes down to produce more and more downforce until it stalls, then it flexes back up again. Then, as it picks up downforce once more, it flexes down again. We are only talking millimetres here but it makes a difference - and eventually the wing finds a happy medium.

This characteristic helps absorb a lot of the forces that are being thrown at the car -
and especially the front suspension. On other more rigid wings, these forces pull the car down and, as the front wing stalls, the car is the thing that is moving up and down.

You can see it pulling against the suspension and the dampers - and in effect this creates porpoising.

Although the FIA was happy with the wing deflection tests it conducted in Spa, and teams were adamant they did not have to make any changes, the new rules tweak in the floor area of the cars for Monza is going to cause more of an issue for the teams.

Up until now, the deflection tests have been done through a 50mm hole in the plank directly onto the floor tray itself and on the centre line of the floor, 380mm behind the front wheel centre line. To pass the push-up test, teams fitted stays to ensure the floor stayed in a rigid position.

However, if you move away from the centre-line then things are not necessarily so rigid. The floor itself could twist and the skid block plank under the car could push itself into the underfloor by anything up to 10mm. Doing that would not be one million percent legal but there was nothing in the old regulations to stop you doing it.

By twisting the floor and or allowing the plank to force its way upwards into the tea tray area could allow a team to run the front of the car lower. The new tests, which will be conducted 100mm either side of the centre line and on the plank itself, will almost certainly stop anyone exploiting this area of car design, so it should help remove potential question marks. The only bad thing is that work will need to be done my most teams - including those who have not even tried to exploit this area.

One of the quirks of the in-season testing ban is that teams have to do their dirty washing in public, in terms of trying out new parts and developments on Fridays.

The days of being able to run new designs in a closed test session, and being able to plan what parts you race with at grands prix are long gone. Nowadays, teams have to use Fridays to evaluate parts for current events, and maybe even initially test components that are for future developments.

In Spa last weekend, McLaren tried out two different front wing designs - as you can see from the picture here. They used the bottom one in Friday practice and on Saturday morning, but from qualifying onwards they reverted to the 'older' version.

These two wings clearly show two different packages. On the new version, you can see a shortened top flap and a vertical vain that is in-line with the inside of the front tyre. Here the team is trying to get most of the front downforce it requires with the wing section that is in front of the front tyre - allowing the inner part of the wing to then set up the flow for the rest of the car.

If you can get the airflow set up properly for the leading edge of the sidepod, then you will be able to work the underfloor more aggressively.

The new wing looks like a high downforce version and is not the most aerodynamically efficient example - which is the top one - but could have been used as an experiment for stuff that is coming later in the season.

By putting more down force on the outer ends of the wing, there is also a possibility that the team could be trying to get it to flex a little more at the endplates - but from the video footage on track it didn't seem to be any more flexible that other wings run by McLaren.

We saw earlier this year that Force India pioneered the placing of the front television cameras on the central section of the front wing in a bid to help produce more downforce. The concept was later copied by Red Bull Racing.

For Spa, both teams moved these cameras back to a normal position - and I am not sure if this was for pure performance reasons or because the FIA had had a quiet word with them! There were some suggestions that Red Bull Racing had moved them to prevent video footage getting released that showed their floor in action...

Force India also made some small tweaks to the detail of its nose - mainly on the belly section that runs underneath it.

The old nose featured a channel underneath - which would have been designed to accelerate air under the car in this area to help improve airflow. This channel was removed by the flatter under-surface on the nose used in Belgium - and was most likely introduced because of the low downforce configuration required for Spa and Monza.

The double diffuser is now well and truly embedded in what an F1 car is these days. In fact, their design has become so complicated that we can almost eliminate the term 'double diffuser' and reclassify the main elements as turning vanes, which make what we used to know as the diffuser working as well as it can. 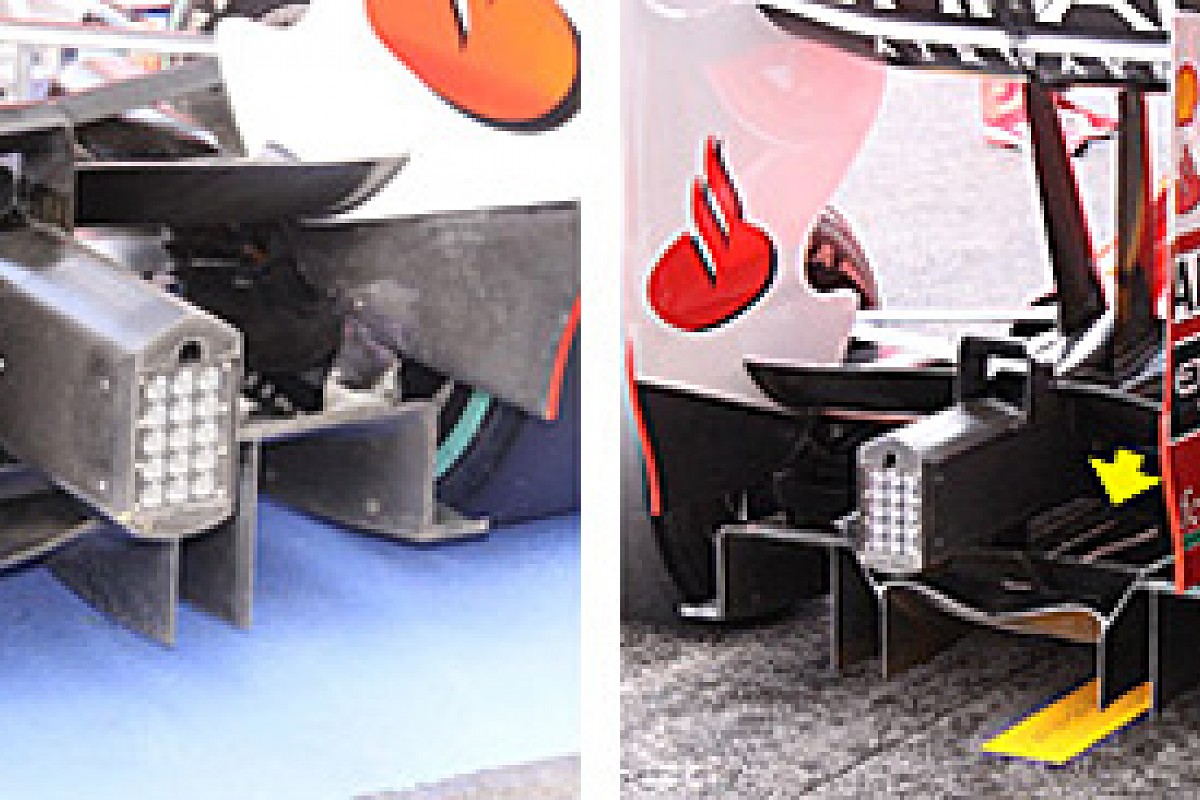 As these pictures show, the Ferrari inlets for the diffuser are huge - and you can actually see the ground through this area. This is a much more powerful diffuser than we have seen for many years - and Ferrari has effectively turned the lower surface into turning vanes for maximum impact.

The lower diffuser is now only connected to the reference plane, while the upper surface itself is connected to the beam wing. It's amazing the development work - and cost - that is being put into bringing performance on in this way.

Ferrari put its drivers on different downforce levels for the Belgian Grand Prix - which was probably a bid to cover itself for whatever the weather was going to throw at them in the race.

Felipe Massa was put on a low downforce configuration, while Fernando Alonso was running with much higher downforce settings. This choice meant the pair were running different rear wings from qualifying onwards.

One of the big differences between these two wings can be seen with the slots in the endplates.

The aim of these slots is to try to get the air pressure on the inside and the outside of the wing end plates to equalise. What you do not want is the air travelling at different speeds as it comes off the top of the endplate - because that can set up vortexes at the top edge of the rear wing which increase the drag of the car for no real downforce gain.

The angle of these slots, and the number of them there are, are dependent on the direction of the airflow and how much you need to balance the two different pressure areas. The aim here is simply to make the whole of the rear wing more efficient.

Renault was quite open in admitting that its step forward in performance at the Belgian Grand Prix was helped in part by its F-duct. And I'm not surprised either. Looking at its integration in the car, it was a well devised piece of kit.

Renault's system has two inlets - one each side of the roll over bar. And like Ferrari, when the driver starts diverting air, it goes through the engine cover spine and into the rear wing main plane internal void.

Because it is effecting the rear wing quite early in the under-surface profile, it means Renault is actually able to make it work more effectively. It can reduce the drag of the wing more dramatically, and the recovery of the wing can happen much faster. That means the F-duct can be activated for longer periods and much closer to the braking area than some other teams.

If you watched Sebastian Vettel's on-board footage from Spa, you could see him needing to get his hand away from the F-duct cockpit hole long before he could hit the brake pedal. I don't think it was the same story for Robert Kubica.

A number of Formula 1 teams made a big effort this season to get their blown diffusers working - and now they are up and running they have started refining the details.

Some of the changes being made now focus on the exhausts - and teams working out where best to place them to help the airflow speed-up as it passes over, or through, the diffusers.

Exhausts are quite important to the performance of the engine, and we saw earlier this season that Renault lost a bit of power with its initial set-up for the blown diffuser it introduced in Valencia.

If you solely focus on getting the diffuser to work, but do not think of the implications that has on engine performance, then you could be cutting your own throat.

Making the exhaust pipes short is good for top end power, but having longer pipes is better for mid-range performance - and you do not really want to throw away engine power just for a tiny bit more downforce.

Expect to see plenty more tweaks of exhaust sizes and placement as the season goes on. 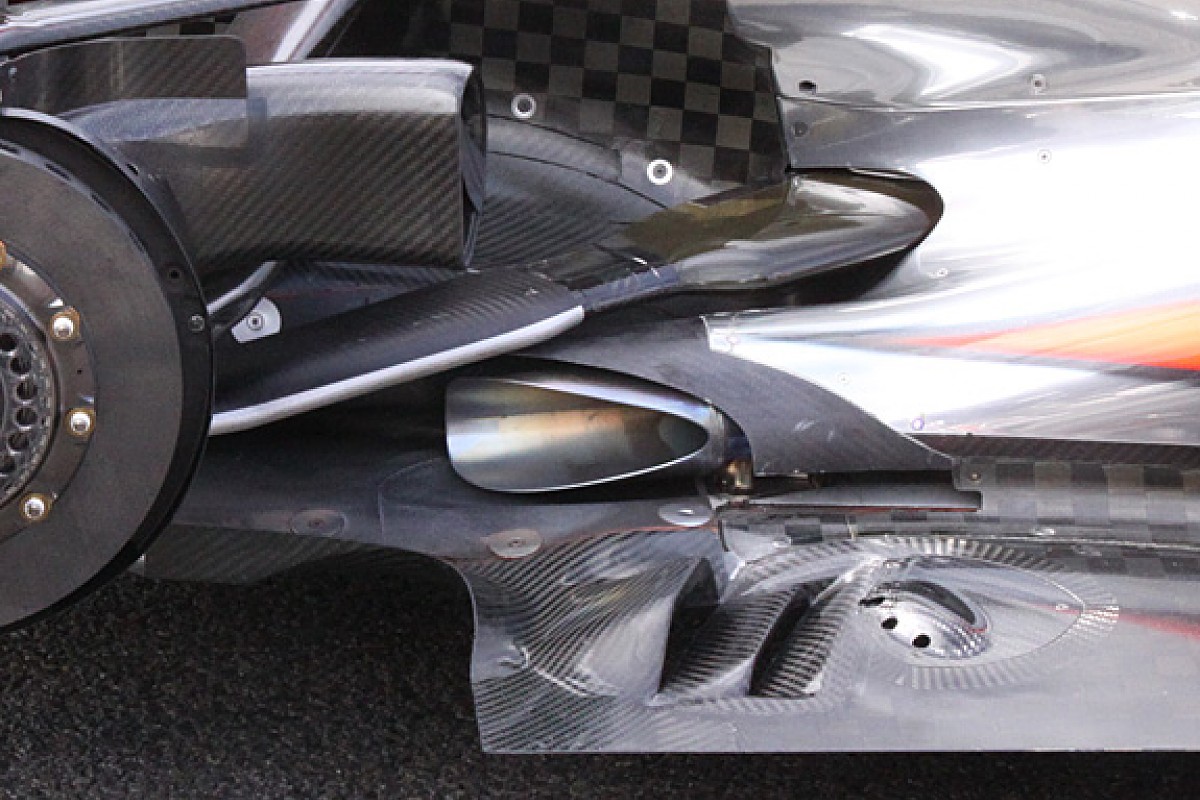