The Formula 1 teams have not taken their cars back to the factory since the Spanish Grand Prix. Instead they travelled directly to Monaco and then on to Turkey - but that has not stopped them introducing a number of interesting developments on the technical front.

And while some teams have continued to push on with their latest updates, there have also been some interesting movement when it comes to teams being forced to take things off their cars - especially Red Bull Racing.

It is inevitable in Formula 1 that when you enjoy a car advantage like Red Bull Racing, your rivals are going to take an extra close look at your product to find out exactly how you've earned it.

That process of close analysis also includes the opposition making sure that your car is 100 per cent legal - and in the case of Red Bull that has resulted in the team needing to make changes to its cars following rule clarification requests with the FIA.

In Monaco, the team had to tweak the design of its diffuser following a complaint - and that meant a lot of work one night for the team members to modify one of its leading edges. Red Bull Racing was not too fussed afterwards, however, when it discovered that the changes had actually marginally increased its downforce!

In the gap between Monaco and Turkey, there had been some dialogue with the FIA and Red Bull Racing was requested to make two modifications to its suspension - neither of which were too dramatic but which will certainly have had an impact on the way the whole RB6 package works together.

At the front of the car, Red Bull was asked to tweak the suspension fairings.

Red Bull had a shadow plate under the car that it believed would allow it to run these fairings. However, the FIA argued that the fairings could not be classified as bodywork, because they moved with the suspension and could not be deemed suspension because they were not part of the integral structure of the wishbone, as the regulations require.

As the picture shows, on the Friday of Turkey, Red Bull introduced an interim solution to the new fairing before running its definitive, smaller fairing, later in the weekend.

Elements like this at the front are all about realigning the airflow to make better use of the next part of the car. The suspension's main aim is ultimately to hold the wheel on, but designers well know that it also picks up the airflow coming off the front wing and realigns it in preparation for the sidepod or other items at the rear of the car. So although the fairing tweak looked small, it could have an impact on something much further back on the car.

Red Bull Racing also had to make a change to one of the suspension pull rods at the rear of the car.

The regulations regarding suspension can be difficult to comply with because beyond the normal size requirements of cross-sections - which must have no axis greater than 100mm and have an aspect ratio no greater than 3:5:1 and be symmetrical - there are other important requirements.

Article 10.3.3 says that: "No major axis of a cross section of a suspension member, when assessed in accordance with Article 10.3.1, may subtend an angle greater than 5° to the reference plane when projected onto, and normal to, a vertical plane on the car centre line with the car set to the nominal design ride height."

Rival teams had spotted that Red Bull Racing's rear suspension did not quite comply with this - the angle was too steep and it featured an aerodynamic section that they felt was not within the wording of the regulations. The FIA agreed.

Changes were made for the Turkish Grand Prix and, like the modifications made at the front of the car, this will have had an impact on the airflow at the rear. Although a uniform round pull rod means the air always suffers the same blockage because there is no problem with alignment, losing the directional airflow may have affected something else further behind it.

Complying with the F1 regulations for the suspension system at all times can actually be quite difficult, but Red Bull Racing is enjoying success at the moment because its interpretation of what is allowed and is not allowed is making its car better than the rivals. Just remember back to last year's double diffuser controversy - three teams thought the regulations and said one thing, while seven others had a totally different idea.

For Red Bull Racing, though, having to make such changes - albeit minor - will have hurt. It is always a negative when you have to take things off the car or are forced to change them. F1 cars are made up of many thousands of parts working together in close unison and, just as small improvements make a big difference, so can small deficits.

Nowadays teams can spend a week in a wind tunnel trying to find 0.1 per cent of downforce, whereas a few years ago you would spent that week and find five per cent.

We saw teams introduce more developments to their F-ducts in Turkey, but one of the more interesting solutions was how Mercedes GP got its version to work.

Most teams have their airflow channel to the rear wing running along the top of the shark-fin engine cover - but this is a concept that Mercedes GP does not appear keen to copy because it would then lose the advantages that come from its unique roll hoop/engine cover design.

What the team instead has an airflow channel that runs through the cockpit, past the engine and gearbox via a duct in the underfloor and then up through hollow endplates to the rear wing main plane, and into the rear wing flap - where it can stall it for increased straight-line speed.

It is a very different solution from what other teams are doing - and in F1 it is true to say that there is never a totally right, or a totally wrong, answer.

With the chassis homologation rules this year making it impossible for teams to make changes to their basic cars, they are finding it a pretty tough task to work out how to get the airflow from the cockpit to the rear wing.

I would say that the Mercedes GP option of getting the air out through the floor, up the endplate and then into the rear wing main plane is not ideal - because by the time the air gets up there it will probably be going: 'Blimey, I've had enough of this.' Air does get tired, and then it doesn't work as well as when it is full of energy. That may be why Mercedes GP has admitted that it needs to do more work on it.

Red Bull Racing introduced its own version of the F-duct in Turkey and I understand it worked quite well, but not well enough for the team to stick to it for qualifying and the race.

The system itself looked quite simple, although it was hard to see where the air came in to the car at the front. At the rear you could see two channels, although I am not sure the one underneath was necessarily there for F-duct aerodynamic purposes.

Looking at it, it could have been used for hydraulic cooling - as the team has connected it to the worst part of the rear wing to allow the negative pressure there to help it work. So in giving up a fraction of bad air they were getting a lot of cooling from it.

I have often talked about the importance of the front of the car - and especially the front wing. After all, it is the first part of the car that hits clean air and then everything else behind it has to work in its wake. 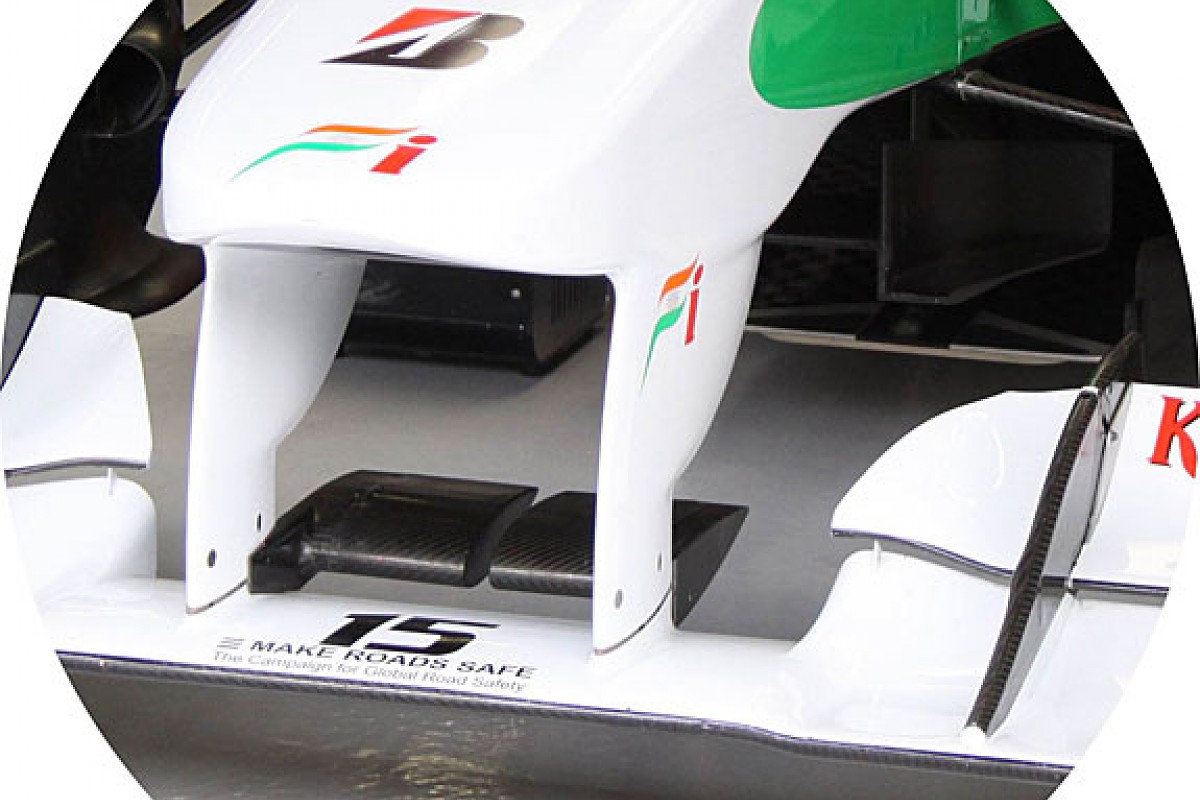 Ideally with a front wing you want to be able to adjust it, and increase its angle, without hurting the rear of the car. If you can do that, then it makes for a pretty good car - and you can then use the suspension and turning vanes to tidy up this airflow. Force India has now started using the front mandatory camera and their mountings to try and help with airflow management.

The regulations prevent teams from having bodywork near the centre section of the front wing, but if you can use the cameras like Force India has, then you've got something else that could even produce a bit more down force. It is not classified as bodywork or part of the car and it's a clever interpretation of the regulations.

Most people mount their cameras well forward on the nose, so they are picking up airflow at the front of the car and using this airflow to help re-align the airflow coming off the front wing turning it downwards - this helps the rear of the car produce a little more downforce.

I would not be surprised if a lot of other teams followed the Force India route from now on. However, if a team has had its cameras mounted in one position up until now, it may find that moving it into another area can hurt the airflow over the rest of the car.

The only problem is how this concept goes develops, because in theory you could start creating big flaps out of the camera mountings. If that happens, then the FIA may start to clamp down on it.

Renault has adopted a very aggressive development programme this year, and in Turkey it brought yet another new front wing design.

The team went down the route of making its front wing into a 3D slot-gapped flap-to-endplate arrangement - and it is clear from the number of developments it has introduced this year that it has a pretty good handle on how its car is working in this area.

Where the front wing main plane joins the FIA-defined centre section, the wing is now two-piece with a slot gap. This principally allows better airflow to the leading edge of the under floor. 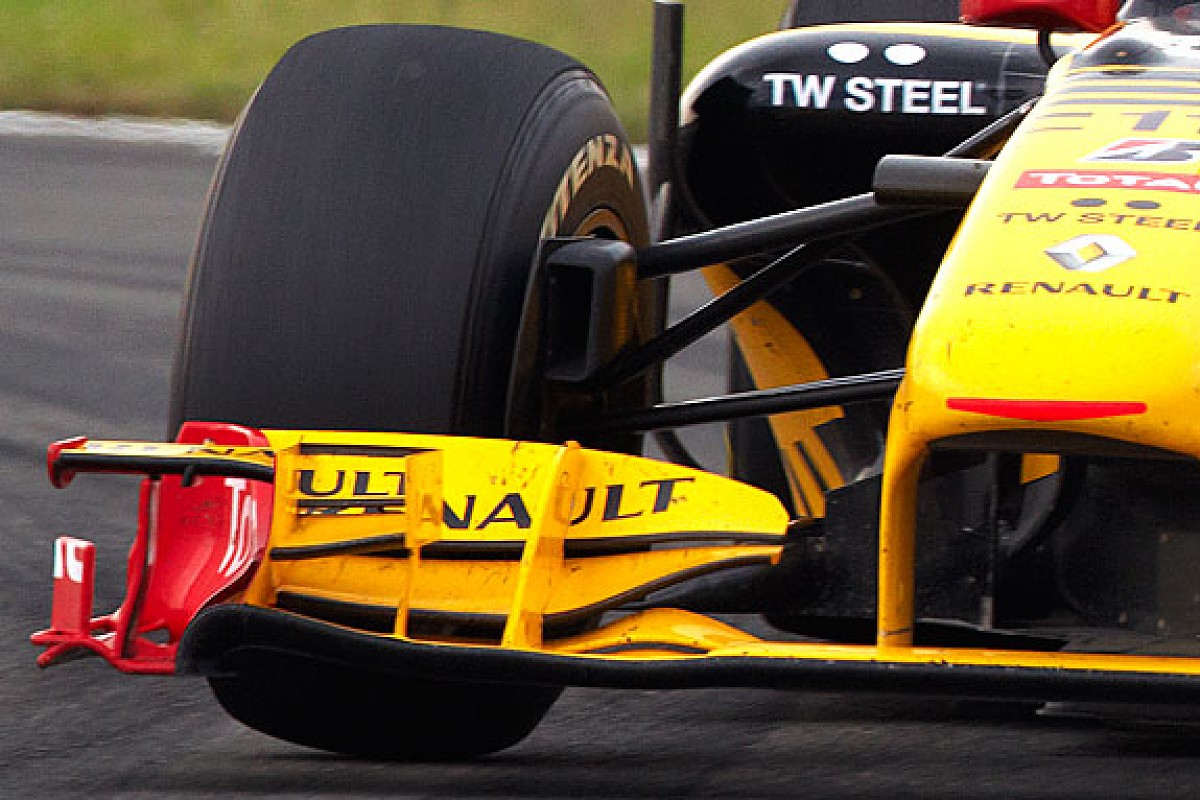 The two piece main flap is similar to before, which offers reasonable control over airflow separation when the car is at low ride height, but changes have been made to the forward upper wing.

It is now two-piece inboard of the vertical splitters and single piece outboard of this splitter. This outer area has quite a complicated airflow - as it is in front of the tyre and you want the air to get diverted around it - rather than over it where it could actually produce more lift.

Renault appears to be well hooked up in understanding where all the air is going once it leaves the front wing - and that is a sign of a team having a solid engineering base.