The Extreme E series, the first all-electric rally raid championship, gets underway this weekend. As the field had landed in Saudi Arabia for the Desert X-Prix, a few teething problems hit the field as they prepared for their first runs in anger. Can XE resolve its issues before the first race kicks off? MATT KEW investigates.

Extreme E co-founder Alejandro Agag reckons there’s a problem when he feels comfortable. He doesn’t like routine; he prefers fighting fires. As such, he should be in his element during the first day (Friday) of the Desert X-Prix, the inaugural event of his all-electric SUV off-road racing championship.

During the first 70 minutes of the opening shakedown session, there was only one aborted run for Chip Ganassi Racing driver Sara Price. Even by the standards of battery-powered motorsport, the five-mile course fell particularly silent.

Alongside 14-time short-course oval racing champion Kyle LeDuc, the American driver line-up is rated as the one to watch in Extreme E. While a win for any of the teams entered by Formula 1 world champions Lewis Hamilton, Nico Rosberg and Jenson Button stands a far better chance of cutting through into the mainstream, CGR is the strong favourite.

PLUS: Extreme E - the team-by-team guide

Under the guidance of team manager Dave Berkenfield, the team has a lot of sway in Extreme E. Championship organisers are listening to the squad and its experience more than any other. Tyres are a case in point. During the group test at Motorland Aragon, the Continental CrossContact rubber was ripped from the OZ wheels on a handful of occasions. Wind on to Saudi Arabia, Vision is now supplying the new bead lock rims to secure the tyres in place. CGR led this push for change, once the bead-lock kit eventually made its way through Saudi Arabian customs…

Similarly, Veloce Racing won the draw to take to the course first for the opening shakedown. But CGR volunteered to take that place, confident in its abilities to lay down the benchmark and content to share its learnings with the other eight teams. Price sat on the start line in the baking sun aboard her Odyssey 21 E-SUV, visualising the corners, mimicking the steering inputs that would soon be required.

Autosport understands that the car was in the wrong setting as it soaked up the heat and drained the battery. She scrabbled away from the line to record a small piece of history in making the first meaningful run in competitive conditions. But as she reached the intersection where the Extreme E course meets the service roads, there was a big impact as she crested the bank of sand at the edge of the road. Limited 12.5-inch suspension travel at the rear, compared to 35 inches at the rear on a pukka trophy truck, kicked the back end in the air like a bucking bronco. 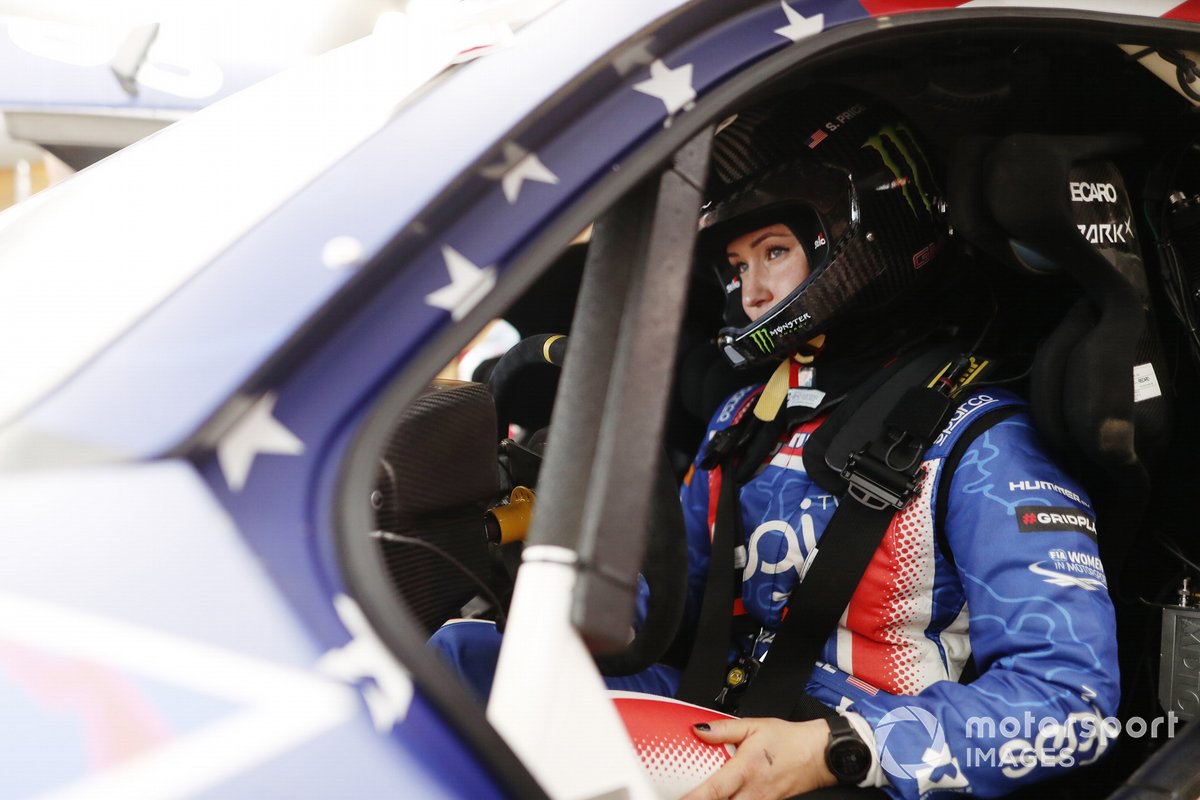 Over the next few hundred metres, her power steering began to fail before the car switched into a ‘limp home’ mode. The heat and the jolt had overworked the rather diminutive 12-volt battery and she ground to halt around 3.7 miles into her run. The Odyssey, resembling a Hummer thanks to bodywork modifications, would return to the service park on the back of a trailer sometime later.

As Price hopped aboard a truck to make her way down to the team tent, she pulled up in front of team-mate LeDuc and fed back: “She just turned off on me. It just dropped power completely. I was going through a turn and then nothing”. That’s not a superlative start to life for Extreme E. She won’t get another lap, nor any relevant experience of the final 1.5-mile stretch until her time trial run in qualifying on Saturday.

“We want [body contact], we want to cover cars in sand and blast out windscreens. We want nine cars racing. We want fans to look up when the next race is or bummed that they missed round one"Kyle LeDuc

Some consideration must be given to the fact that all three of the planned Extreme E practice races were cancelled due to the pandemic. A day and a half of full-power testing at Motorland Aragon doesn’t offer much real-world data. For a first-hour glitch to occur during a shakedown, quite literally a test, isn’t a colossal surprise. And if it must happen, let it take place essentially behind closed doors and not a on a TV feed.

Anyway, it’ll make for a good segment in a documentary on Extreme E in a few years - ‘started from the bottom, now we’re here’.

Agag himself makes the comparison to preparations for the inaugural season of Formula E during 2014, where a car completing a full lap at Donington Park was met with celebration. He says: "Formula E, 18 cars stopped. Eighteen! Of 20! So we’re doing amazing! It was a case of 'two corners, then another one, three corners - shit!' We cheered when one did one lap… This is more extreme." 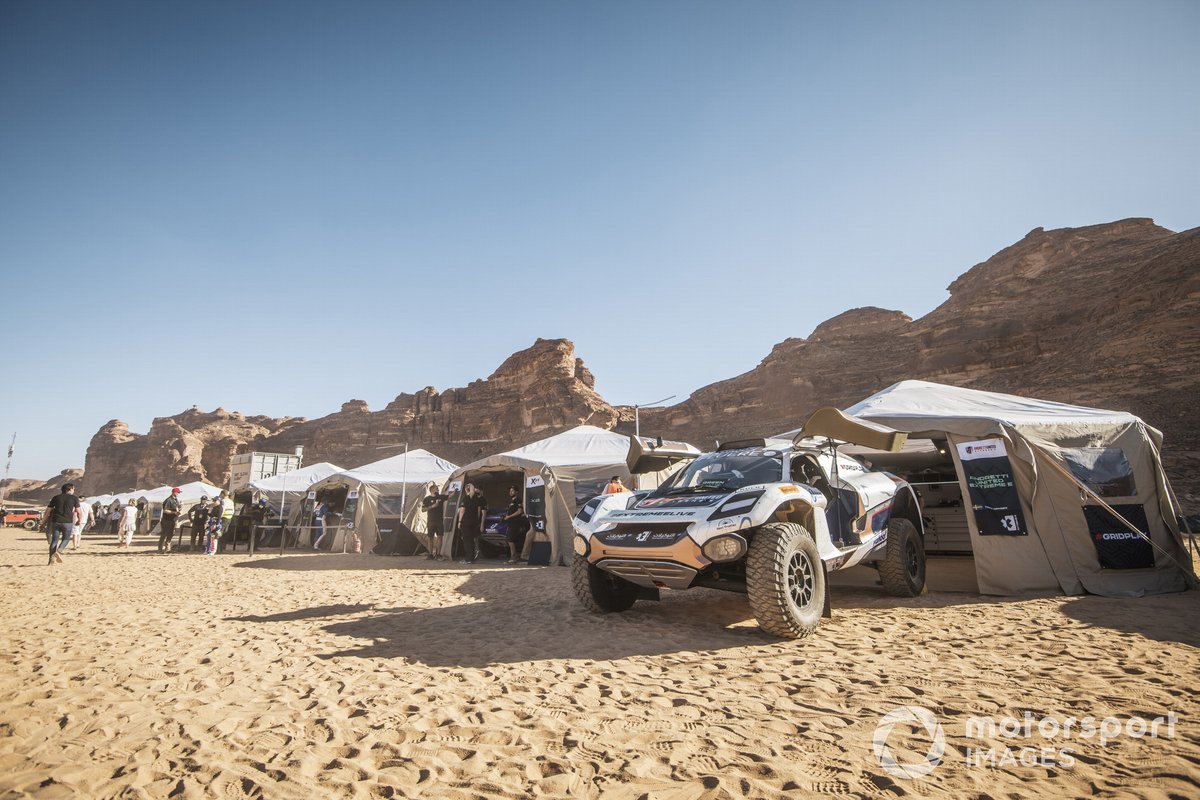 LeDuc brings it back to the desert, adding: “The series is a little rookie in the world of true off-road”. One anonymous team high-up goes a touch further, saying “it’s like an auto test in a village car park”. Race control didn’t have a radio, for instance.

Nor is it all sweetness and light from the drivers after they completed their recce runs of the track in the AlUla desert. To the uninitiated, it looks spectacular. Incredible inclines and declines that will test the mettle of all the drivers. Trucking over one or two dunes, through the thick camel grass.

The TV helicopter and drones are set to capture remarkable footage as the cars power on and leave a cloud of dust in their wake through the wide-open sections . But that’s where some of the feedback lies - the drivers aren’t being critical for the sake of it. They rate the track as 'good', but it needs to be more than that. Drivers want to see Extreme E flourish and are willing to help the organisers make modifications to ensure it does.

The ‘extreme’ in Extreme E doesn’t come from car speed alone. Drivers want narrower sections, more and tighter corners, more dunes. The last-minute switch to a three-car grid for the semi-finals and finals, due to the excessive dust, has been met with muted chagrin also by the more experienced drivers.

“We want [body contact], we want to cover cars in sand and blast out windscreens,” added LeDuc. “We want nine cars racing. We want fans to look up when the next race is or bummed that they missed round one."

Speaking ahead of an aborted run following another power steering glitch, double World Rally champion and three-time Dakar Rally victor Carlos Sainz Sr reckoned: “My input is 'I want to be positive'.

“Much of the time [we are] flat out. It is not that technical. It's obviously a learning process but it's a pity because here obviously in the area, there are some places like that, but we need to have an open mind and learn. Unfortunately, this is now like that. We need to take the best of these and learn from for the future. 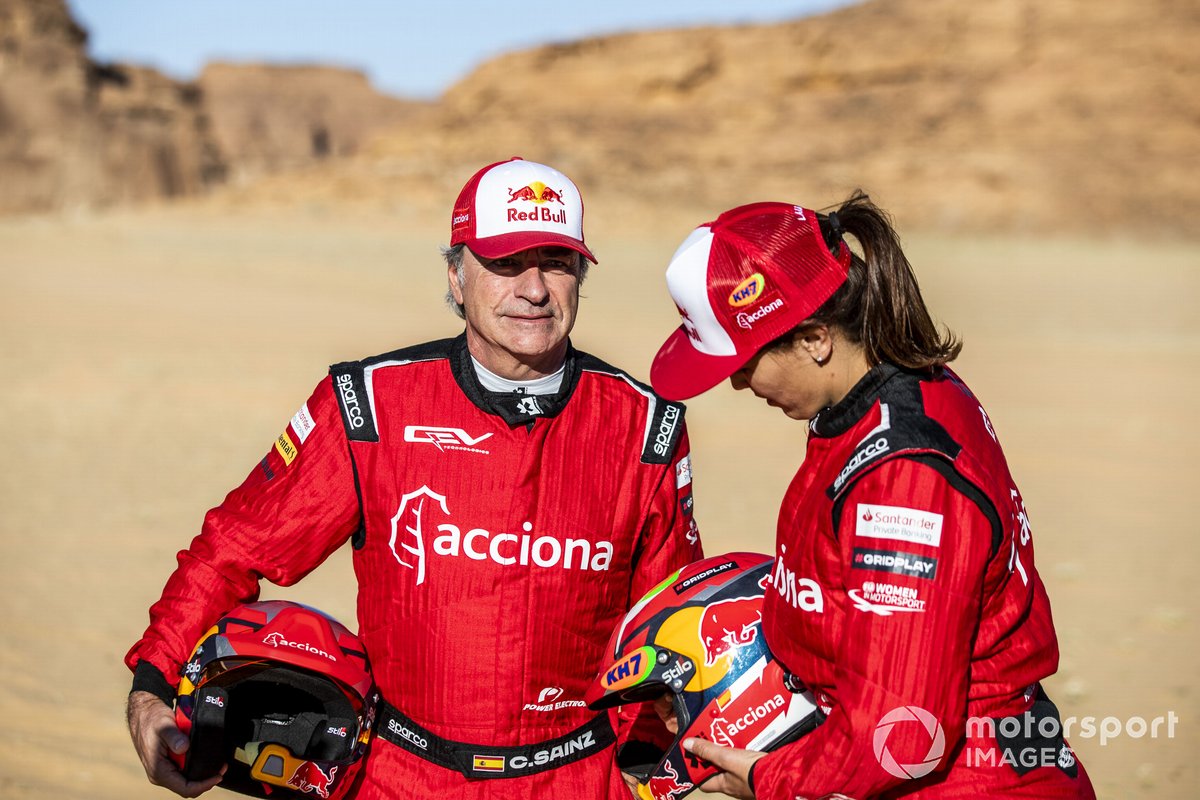 “I was expecting more off-road.

“After two minutes, what do you prefer? Do you prefer a really nice landscape [on TV] or a nice race format? And I think in the future, they will have to have the two things in mind.

“I'm not criticising, I'm just bringing the point in a positive way. And I'm trying to help.

“I will try to help the championship. It's not the time to criticise, another time. It's the time to learn and the time to really understand what is the best option.”

“My input is 'I want to be positive'. Much of the time [we are] flat out. It is not that technical. It's obviously a learning process but it's a pity because here obviously in the area, there are some places like that, but we need to have an open mind and learn"Carlos Sainz Sr

Another few cars, including Button, also suffered issues on their shakedown runs. The car constructor Spark Racing Technology is in for a long night as its aims to resolve the myriad issues. If it weren't for Saudi backing and broadcast slots on ITV1, BT Sport 1 and Sky Sports Main Event, the odds of this event being switched overnight to become a 'non-championship' round would have been slashed over the last few hours.

Modifications to the course to avoid launching the rear of the car and causing the subsequent battery issue are being called for, not least from Button. But that's not looking like any kind of guarantee the Odyssey will survive the rest of its voyage through the sand.

Not just from the desert sun, there'll be a few sweaty palms in the Extreme E camp just now as they aim to deliver a spectacle for the cameras. Agag and his team will need to show just how comfortable and well they cope with problems to ensure that 'it'll be alright on the night'.