The X44 duo headed an entertaining shootout as official reserve driver Jutta Kleinschmidt stepped in and starred for Abt Cupra and the Chip Ganassi Racing entry finally showed its speed.

X44 was the sixth team out on the four-mile beach front course near to Lac Rose, with Loeb taking the start for the two-lap qualifying run.

A rule change for Senegal means that drivers have to alternate for each session, so Gutierrez will be first in for the afternoon qualifying run before handing back to Loeb for the first semi-final. Should X44 progress to the overall final, Gutierrez will take the race start.

With Loeb setting the fastest opening sector of the morning sprint before handing over to rapid spare-time orthodontist Gutierrez, the pair combined for a 10m47.289s effort.

That gave the French-Spanish duo a 4.239s cushion over the Chip Ganassi Racing entrant, with Gutierrez’s run largely to thank for holding off the wild performance of Kyle Leduc.

The American driver, responsible for two massive crashes for the team during the maiden round in Saudi Arabia in April, caught huge air over the crests and took out a camera on his way to setting the fastest individual lap by some 4s over Loeb.

Although team-mate Sara Price was solid rather than remarkable when she started the car, the CGR entry finished runner-up ahead of the Abt Cupra entry.

After contracting a stomach bug on Friday and running slowest in practice, Claudia Hurtgen was sidelined for Saturday and replaced by central reserve driver Jutta Kleinschmidt.

The 58-year-old, who in 2021 marks 20 years since she became the first and so far only female to win the Dakar Rally, flew on her run to move into provisional pole. 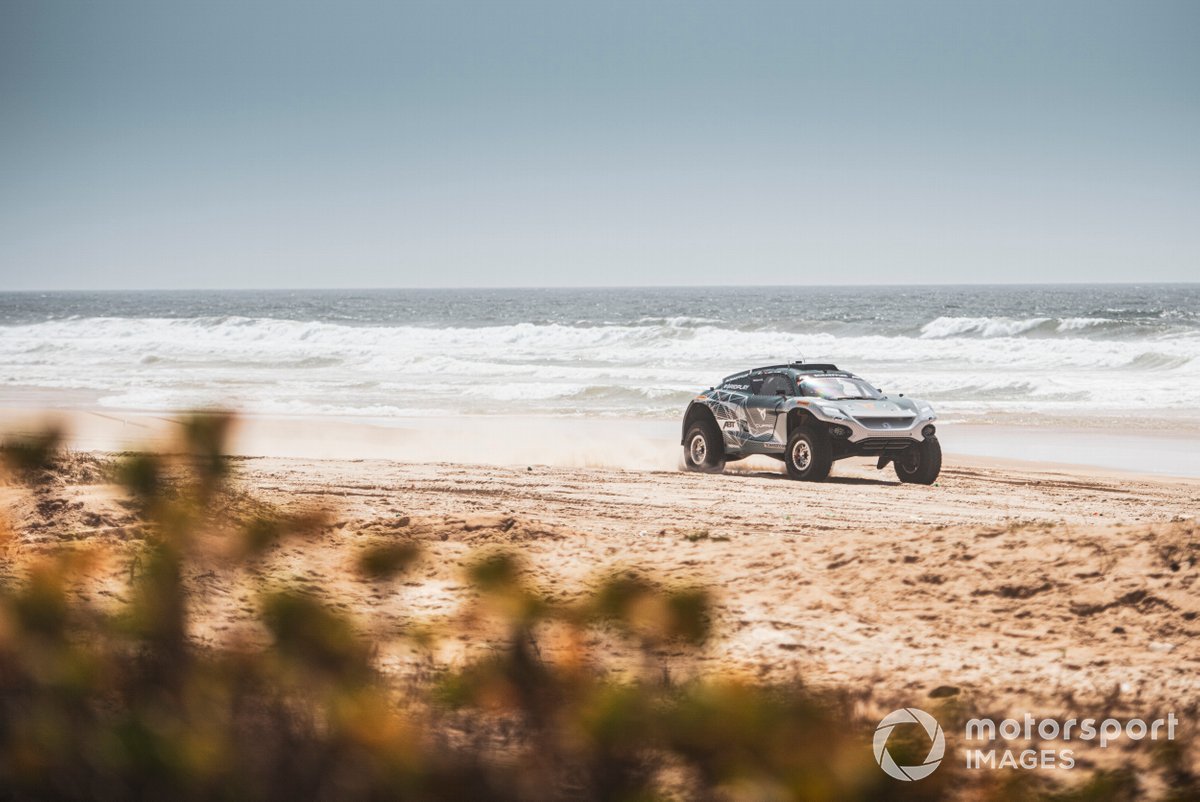 Alongside team-mate and double DTM champion Mattias Ekstrom, the pair were comfortably quickest by 4.2s before X44 and CGR shuffled the outfit down the order.

However, the squad remains was knocked down to fourth for their 40s driver change over, with Kleinschmidt adjudged to have entered the active pitlane before Ekstrom had stopped and switched the car to neutral.

Fresh from W Series testing at Anglesey, Jamie Chadwick set her first competitive Extreme E lap following the rollover for Veloce Racing co-driver Stephane Sarrazin in Saudi Arabia that terminally damaged the car’s roll cage when it was punctured by a radio aerial.

Both drivers were off the pace to land the sixth-best time, while Oliver Bennett thumbed the pit limiter and briefly slowed. He and fellow Hispano Suiza runner Christine Giampaoli Zonca were seventh as a result.

The Acciona Sainz team of double World Rally champion Carlos Sainz Sr looked a dead cert to be in contention for the lead after an early flying run.

But the team were knocked out when Laia Sanz suffered a car failure. She endured a heavy landing that brought the Odyssey 21 to a halt. After a reset she continued briefly before stopping again for a retirement.

That was immediately followed by a similar problem for the Andretti United entry. With 2019 World Rallycross champion Timmy Hansen at the wheel, he had a series big jumps and slowed.

But following a full power cycle for a delay of 3m18s, he was able to finish the lap and hand over to team-mate Catie Munnings, the pair ending up only eighth fastest.