BS+COMPETITION has won the Hockenheim Bonus Race during Round 2 of the VCO ProSIM SERIES thanks to an dominant drive by Laurin Heinrich and Kay Kaschube.

The 2021 VCO ProSIM SERIES headed to the Rhine valley and Hockenheim within iRacing for the second round of the championship that pairs real-world motorsport stars with professional racing Esports talent.

Utilising the Dallara P217 LMP2 across the field, each race event is split into qualifying, two 20-minute heat races and a 30-minute ‘Bonus Race’ finale as the two-car teams compete for a share in a $25,000 prize pool.

The first event this season was dominated by Team Redline, but as the grid formed for the first heat race in Germany, other teams had clearly taken a step forward.

It was Red Bull Racing Esport’s Yuri Kasdorp who would start from pole position ahead of the two Coanda Simsport entries of Charlie Collins and Jeremy Bouteloup. Winners of both Heat 2 and the Bonus Race at the Red Bull Ring last time out, the #11 Team Redline car of Maximilian Benecke and Chris Lulham lined up fourth.

It was a relatively quiet opening lap at the head of the field, everyone on their best behaviour. Benecke made a move on Bouteloup to snatch third at the Turn 6 Hairpin, but upfront, Kasdorp was largely unchallenged. 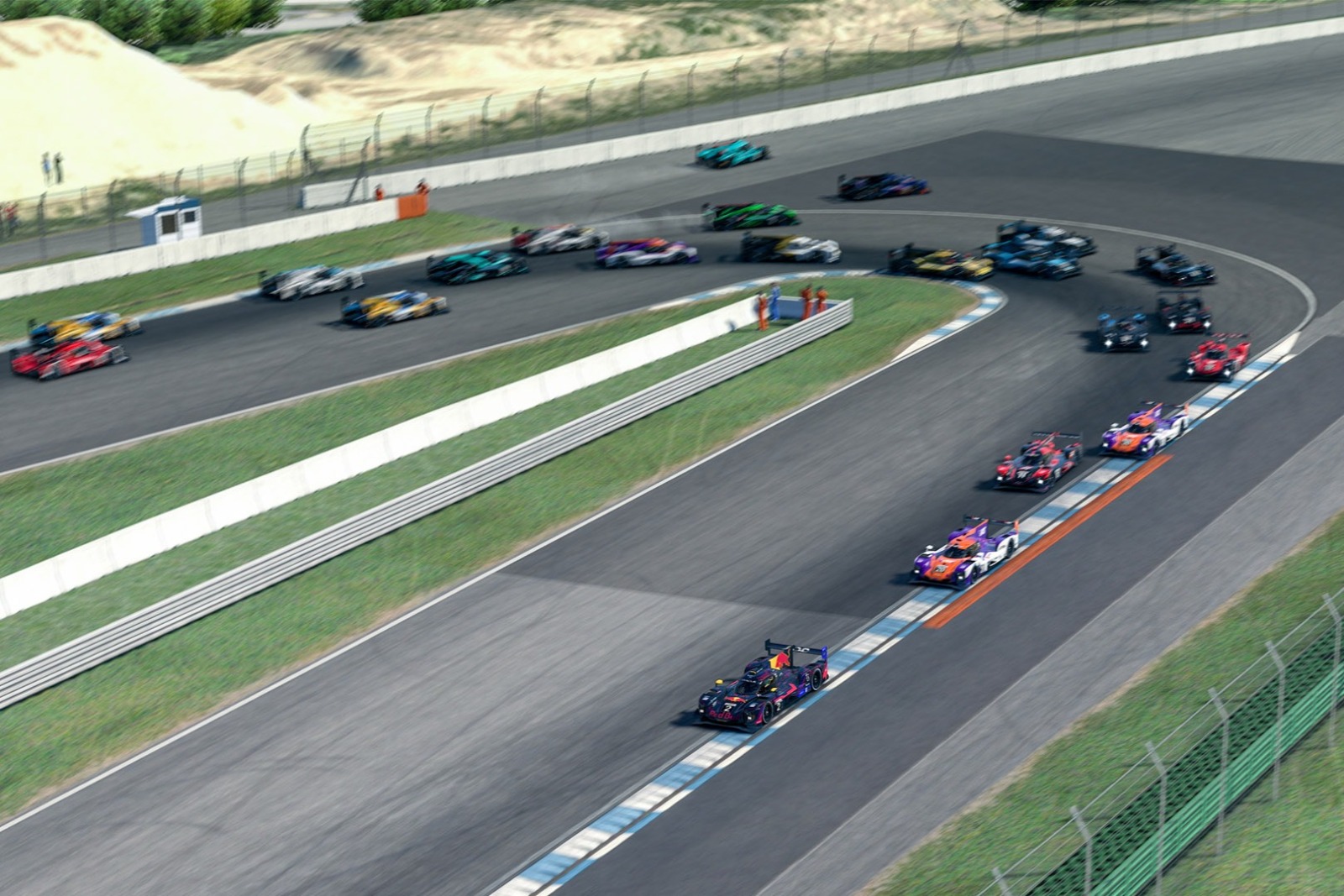 Further back, however, a contretemps between several cars exiting Turn 6 and through Turn 7 ended any hope of a good result for many key competitors, including reigning champion Joshua Rogers in the #1 Team VRS entry.

Most of the midfield entered the pits for the mandator driver change at the halfway mark, but the leading pack stayed out one more lap until just under seven minutes were left to hand over. With so many cars flooding the pit entry, some further back made unfortunate contact.

Danny Kroes took over the lead from the car-sharing Kasdorp, but down into the Hairpin a hard-charging Mitchell deJong dived to the inside, taking first position in a decisive move that also opened the door for Lulham to sneak through. 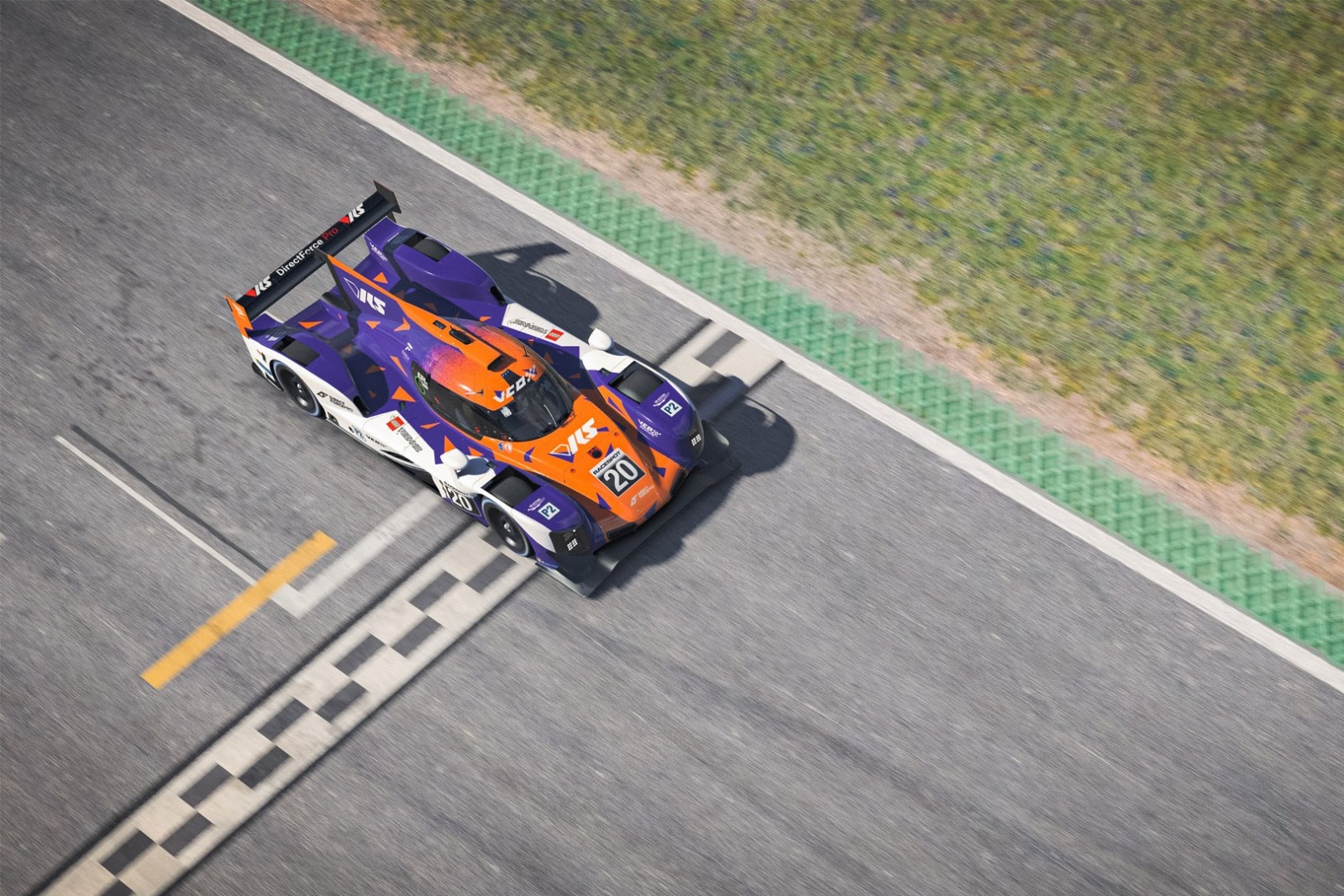 With under a minute left, three-time ADAC GT Masters Esports champion Moritz Lohner lifted the #30 Coanda car onto the podium, after going side-by-side with Kroes for several corners. The rest of the top positions remained static, with deJong ahead of Lulham and Lohner in third.

The second 20-minute race of the evening was headed by the #47 MSI Esports entry driven by Alejandro Sanchez ahead of Martin Kronke for Team VRS, Luke Bennett for Team Redline and Vlad Khimichev for R8G Esports.

At the start, second-placed Bennett ran wide at Nordkurve, dropping to the lower end of the top 10, while at Turn 4, Team VRS’ Mack Bakkum – paired with IndyCar and NASCAR Xfinity driver Sage Karam – speared across the grass after a rub with Arturo Melgar, but mercifully missed the wall. 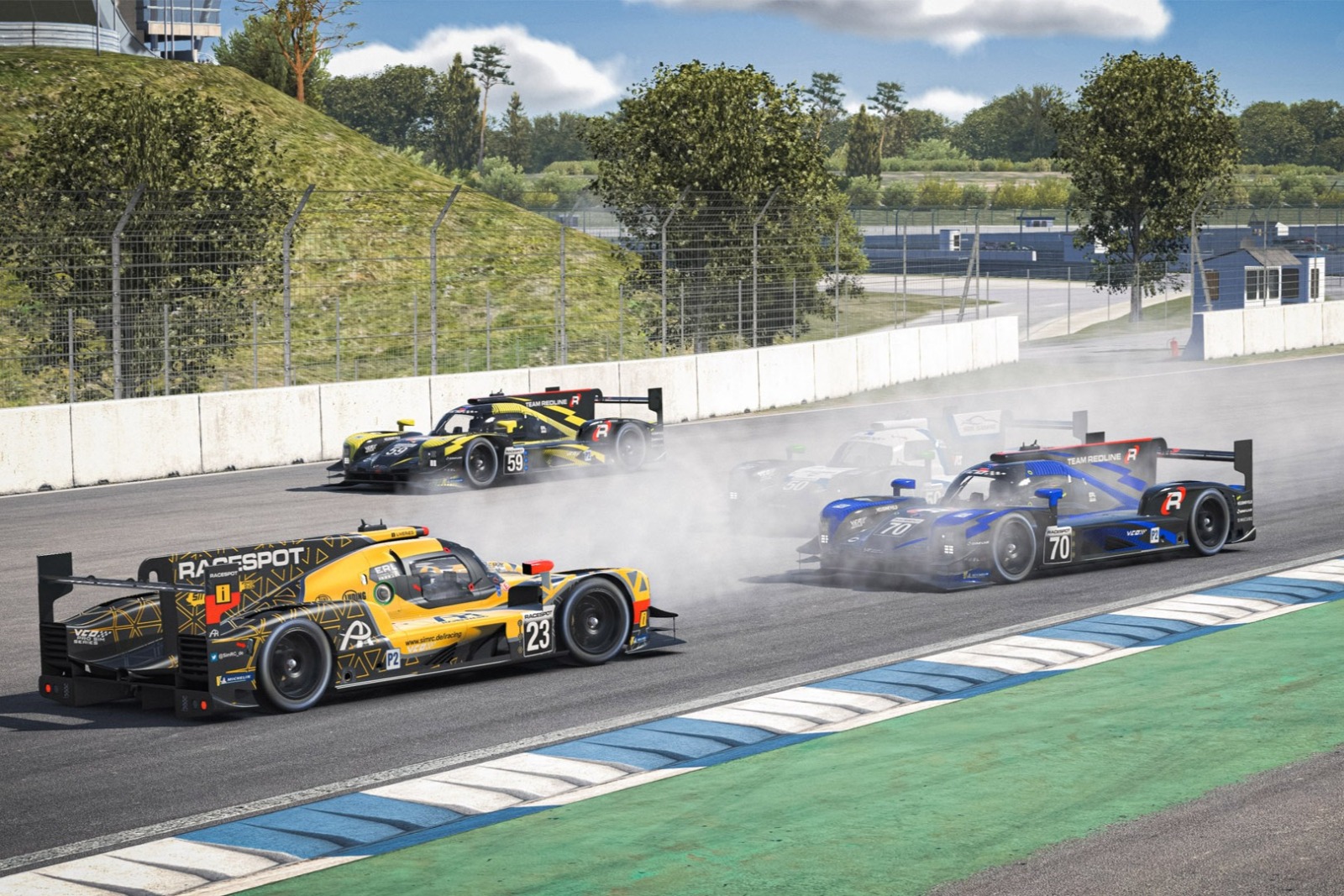 Sanchez had built a useful lead as the field neared the end of the first lap, but further drama unfurled for Bennett as he ran wide once more at the exit of Turn 10, spinning into a hapless Bram van Putten in the process.

On lap two, the drama continued as in the mid-pick skirmish Christopher Dambietz turned around Markus Dec at the Hairpin.

Once again, the field was split into two camps. Those who pitted near the halfway mark, and those who waited a lap longer. Sanchez’s lead of over three seconds was maintained after the driver switch, with Muhammad Ibrahim now at the wheel. 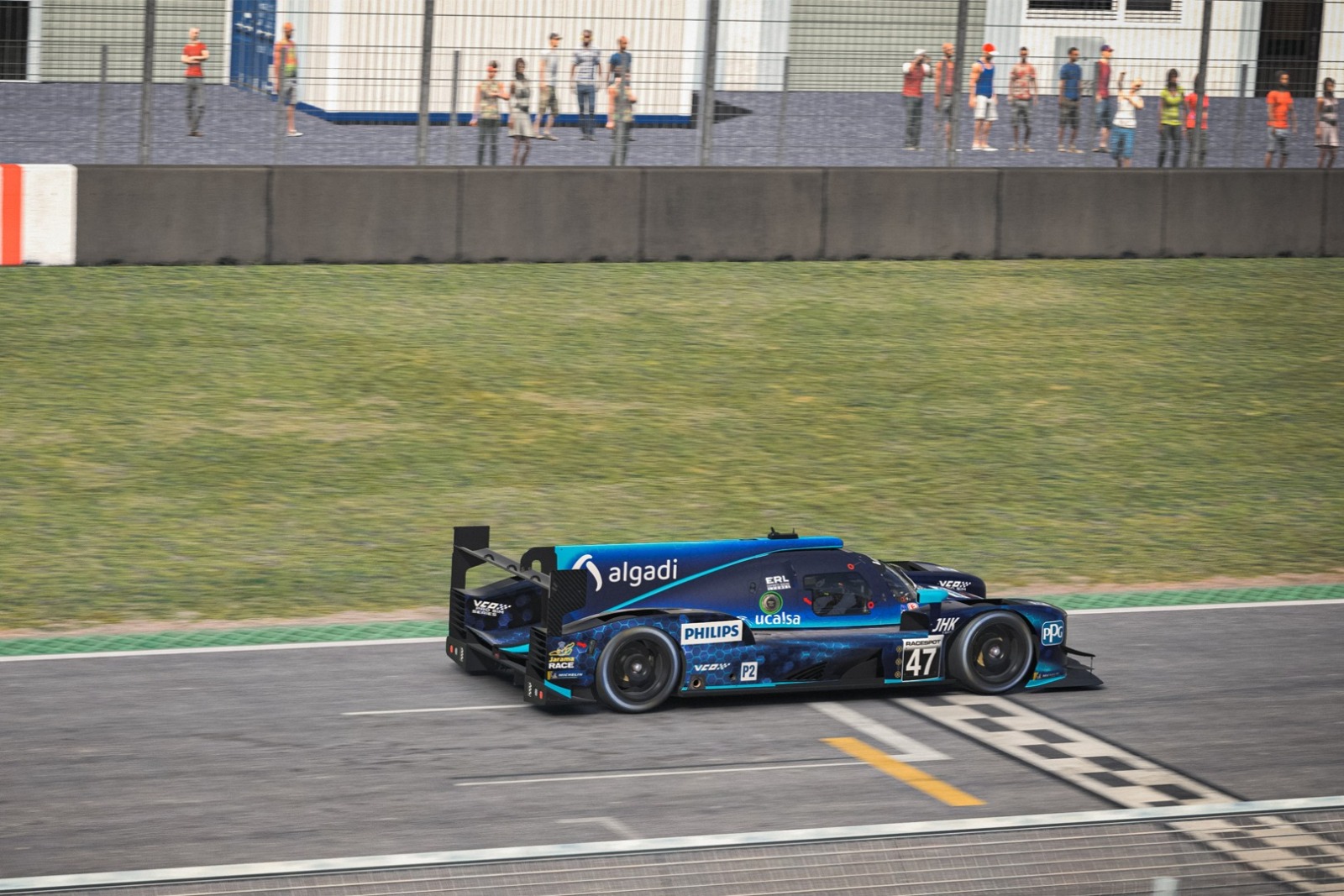 VCO ProSIM SERIES Hockenheimring Heat Two Muhammad Ibrahim Raoul Hyman was now in the second-placed #93, but Gustavo Ariel in the #888 R8G Esports car was pressuring him all the way to the line. The result, however, was Ibrahim ahead of Hyman and Ariel.

The top 15 cars from both Heat 1 and Heat 2 then lined up for the 30-minute Bonus Race final.

The #20 Coanda Simsport driven by deJong led the grid away, but ran wide defining into Turn 6 on the opening lap, allowing Laurin Heinrich for BS+COMPETITION into the lead and Round 1, Heat 1 winner, Enzo Bonito, into second. 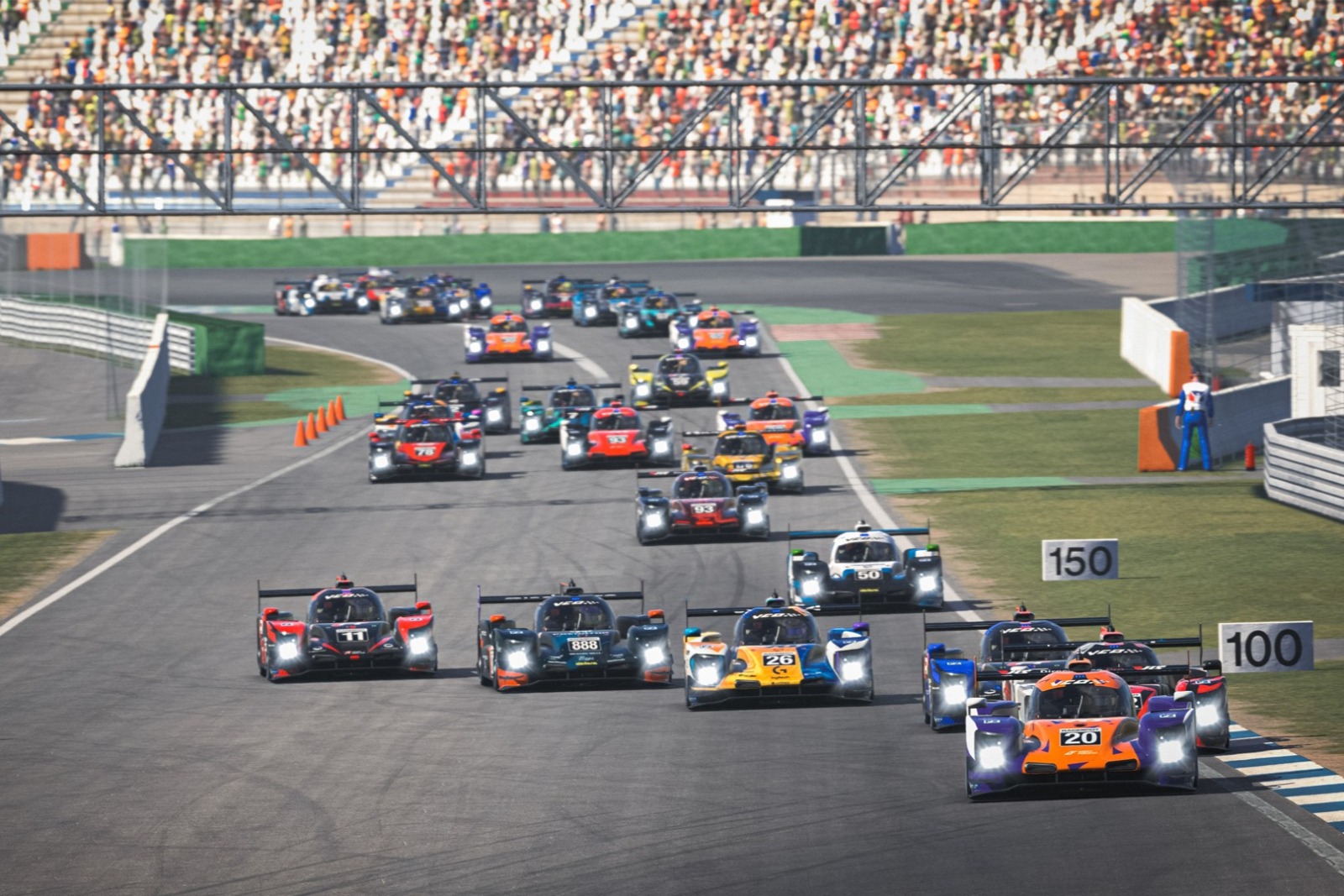 On the second lap, deJong hadn’t ceded second lightly and sought to make amends. After an attempt to overtake Bonito slowed both cars, the #26 driven by Jordan Caruso and the #11 by Lulham entered the fray, culminating in Bonito visiting the gravel at Mobil 1 and deJong dropping to fifth.

The first cars to complete their mandatory pitstop were at the tail end of the field, with 15 minutes completed. Team Redline’s Lulham then swapped one lap later, while the rest of the leading pack stayed out for another loop, hoping for an undercut.

It worked and with Benecke now at the helm, he swept around the outside of Beau Albert in the Logitech G Altus Esports entry at Turn 2 for second. As the race entered its final stage, Albert was under siege once more, as Collins tried to make a move for the final podium spot. 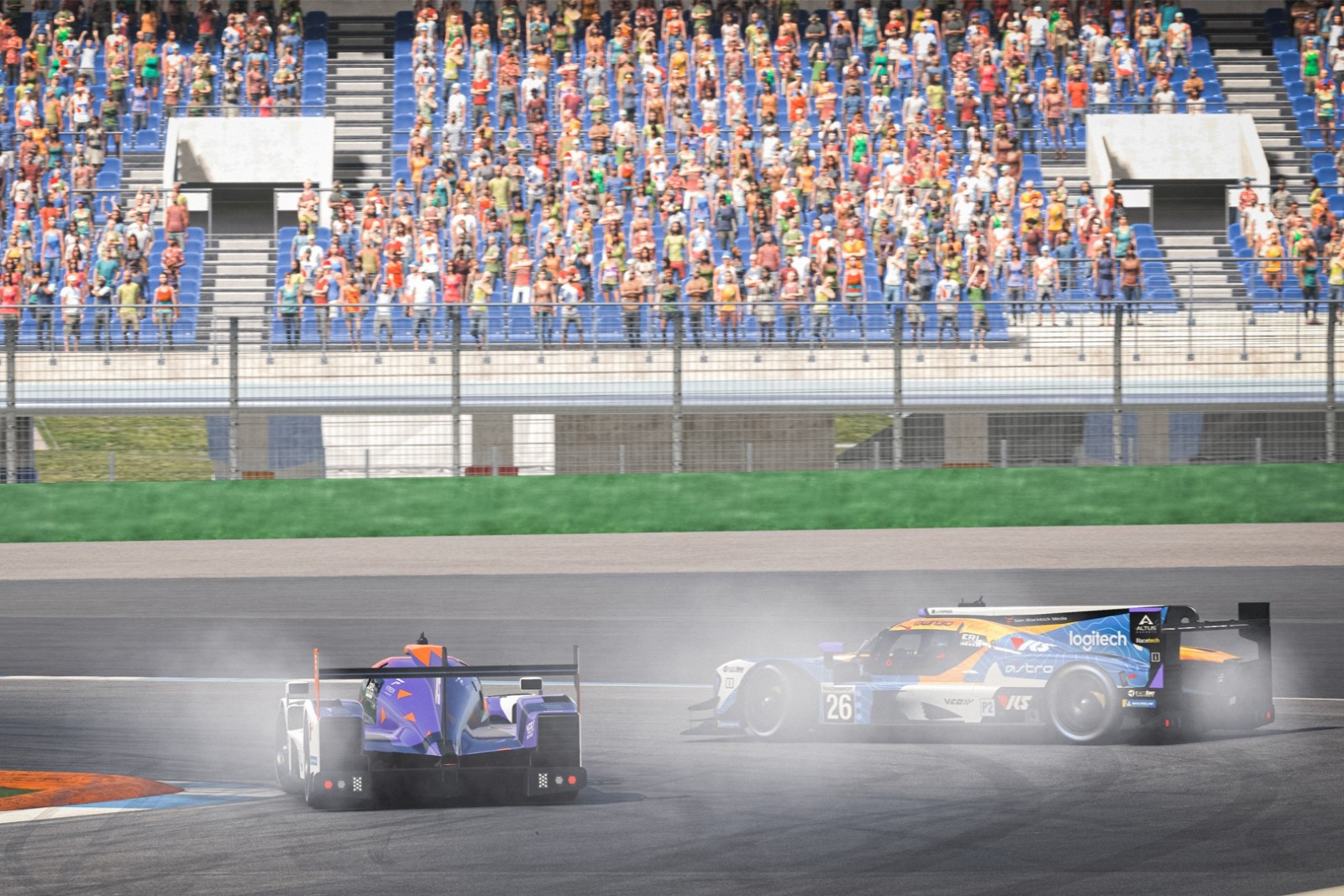 Unfortunately, there was contact at the Mercedes corner, Albert spinning off the circuit and down to ninth and Collins dropping to 23rd.

At the front though, it was a dominant display for BS+COMPETITION, the gap that Heinrich has established in the first stint further extended by Kay Kaschube to take a comfortable victory ahead of Round 1 winners Benecke and Lulham and R8G Esports’ Przemyslaw Lemanek and Nicolas Varrone.

The next round is on Tuesday 16th November and once again the track shall be decided by a fan vote before racing commences.