The 2023 24 Hours of Le Mans Virtual has been won overall by Team Redline, with its #2 entry driven by Felipe Drugovich, Felix Rosenqvist, Luke Bennett and Chris Lulham.

The race was halted due to two red flags in the opening six hours, then at dawn Formula 1 world champion Max Verstappen retired the #1 Team Redline entry following a disconnection while leading. The event was also host to some extremely close-quartered racing.

At the start, it was Verstappen who took the initiative, scything past the pole-sitting Porsche Supercup driver Laurin Heinrich in the #20 Porsche Coanda entry.

But, the Team Redline driver was momentarily held up exiting his pitbox at the end of the opening stint and combined with Porsche running an alternative strategy, the Stuttgart-based sports car manufacturer was back ahead.

In GTE, Formula 3 racer Alexander Smolyar was at the head of the field after team-mate Erhan Jajovski’s stellar lap in qualifying the day earlier in the R8G Ferrari. He held firm, in what become a head-to-head with Lasse Sørensen in the Prodrive FYRA Esport Aston Martin. 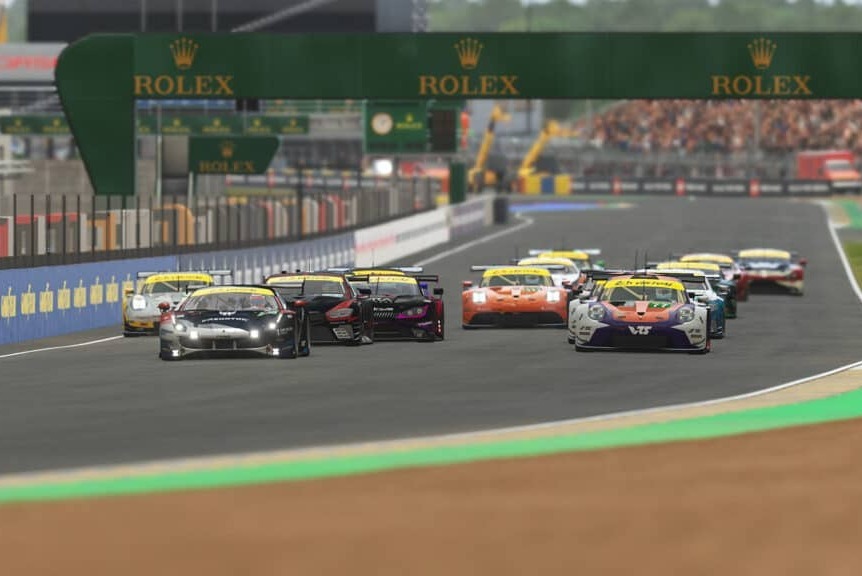 With nearly 90 minutes run, however, both cars disconnected. They did re-join, and received lost laps back, but slipped down the order. This gifted the first and second places to Coanda and its 911 GTEs, now atop both classes as two hours were completed, but under pressure from BS+Competition’s Ibraheem Khan.

Upfront, the focus was on a duel between Verstappen and AMG Team Petronas Esports’ James Baldwin. The Autosport Esports Driver of the Year had made his way up from seventh on the grid to exchange places with the erstwhile race leader.

After three hours, the #20 Porsche still headed the field, with Verstappen’s #1 Redline entry now being driven by current GB3 champion Luke Browning and AMG Petronas in third with Graham Carroll in control.

With four hours completed, several key moments unfolded. First, five and then later seven vehicles disconnected from the race. This was followed by the first red flag, halting proceedings for 79 minutes. 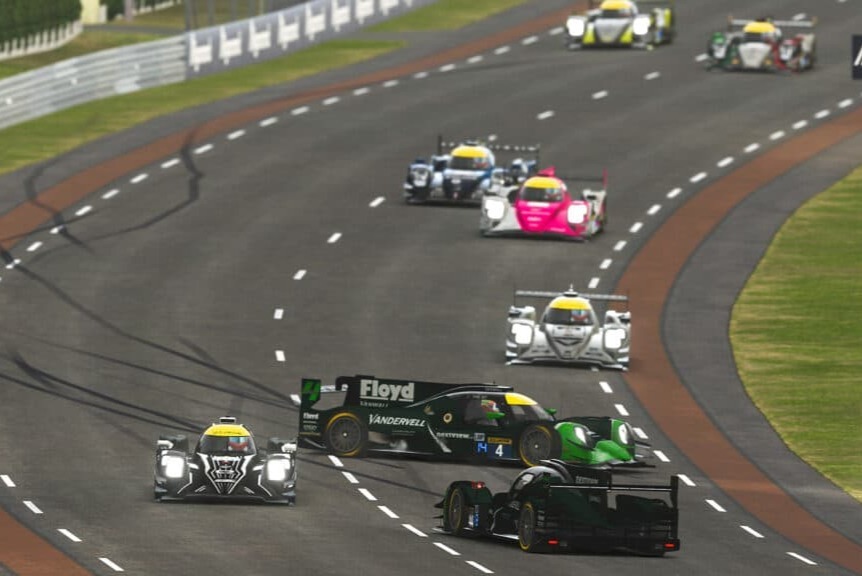 At the restart, three-time World Touring Car Champion Andy Priaulx looked to have been squeezed onto the grass during braking for Arnage. The resulting slow exit bunched seven LMPs together through Courbe de Buisson, and somewhat inevitably a crash ensued.

After receiving a tap, GR Esports’ Liam de Waal speared across into the side of both Vanwall-Burst cars, including the championship-contending #4 and supporting #444. As Michi Hoyer in the latter rolled back across the circuit, Alpine’s Rory MacDuff couldn’t avoid a significant collision.

But soon after, another red flag. A suspected security breach was to blame, with the organising team altering the race set-up behind the scenes ahead of the second resumption.

From there, the race ran without further interruption, and through the night and into the early hours, the on-track action was once again the main focus.

Mitchell deJong led in the #20, but reigning champion Jeffrey Rietveld now in the #1, Browning in the related #2 and Diogo Pinto for Team Fordzilla were close behind. 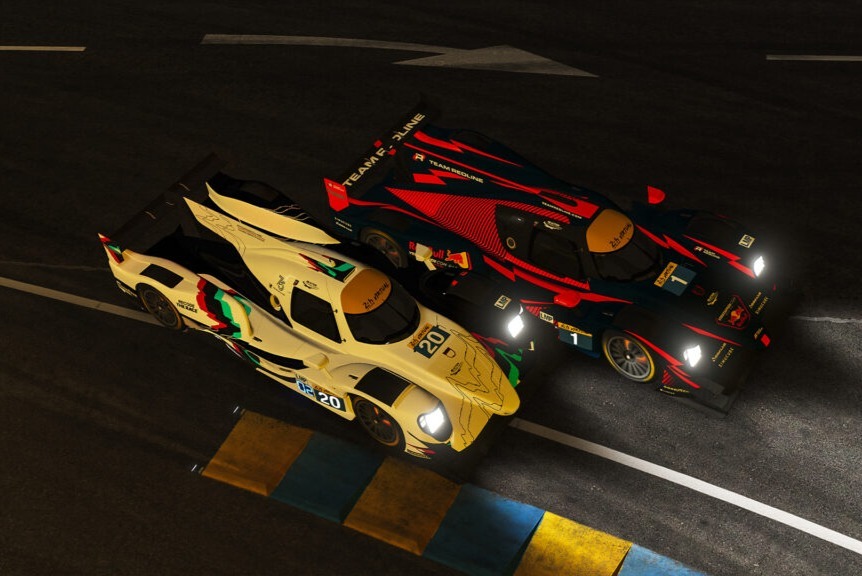 Ayhancan Guven and Rietveld then scrapped, side-by-side, for several stints, no holding back for an endurance race.

It all came to a head when Guven received a drive-through penalty after turning in on the #1 – although the penalty wasn’t for that move alone, but rather a build-up of reprimands. He dropped down to eighth initially, before fighting back to fourth.

Drama then befell the first and second-placed Coandas in GTE. The #88 clipped the wall at the exit of Arnage, damaging the 911, while the #77 was leading until Charlie Collins had a steering wheel hardware failure, plunging the front of the Porsche into the barriers and into a crushing retirement.

This all left Khan at the top of the class in the BMW shared with Bruno Spengler, Phillippe Denes and Alen Terzic – but the recovering R8G Ferrari was closing in.

Deep into the night shift, Peugeot Sport’s first ever sim racing venture came unstuck, firstly due to an internet loss and its base in Versailles near the start, and then contact with the #10 MAHLE BMW of Beitske Visser, Jimmy Broadbent, Michele D’Alessandro and Muhammed Patel.

As the sun rose, Redline was in first and second, the #1 ahead of the #2, with the R8G GTE Ferrari overhauling BS+’s BMW. 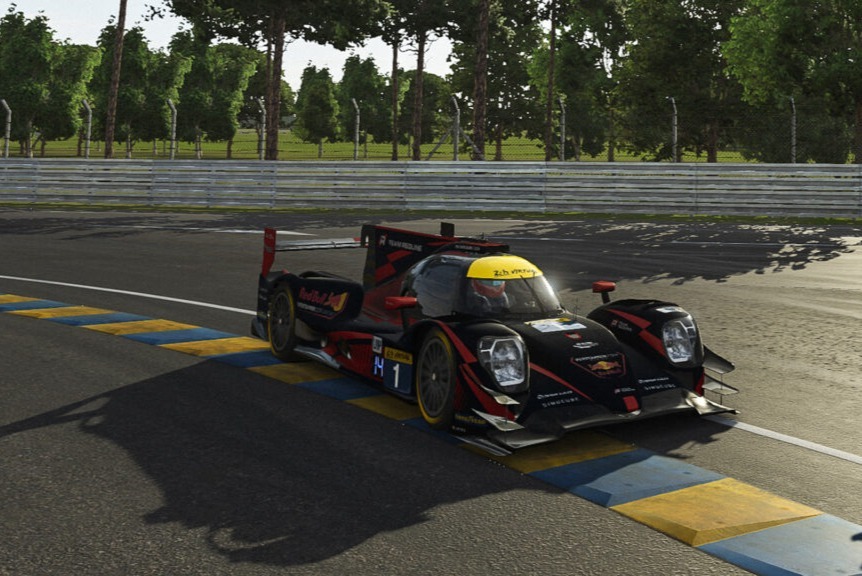 But, then disconnections happened, the #20 and #23 Porsche Coandas, the #966 Fordzilla, as well as the #71 BMW Team Redline GTE within a matter of moments of one another. They all received laps back and continued to fight for podium places.

Apart from Fordzilla, who sadly shifted into neutral and then back to first gear again while moving at speed, blowing up the LMP’s engine. A cruel end to a spectacular drive.

The race-leading #1 Redline by now was also on the retirements list. After suffering a disconnect while Verstappen was behind the wheel, as fewer than four vehicles suffered issues at that moment, as per the sporting regulations, it did not receive a lap back. Upon hearing the news, the team pulled into the pits and withdrew.

“That’s it, game over. I think I have… if I go to Vegas and the casino… more chance to win,” said Verstappen in a scathing diatribe.

In the final five minutes, Sacha Lehmann for Alpine Esports was closing in on 2020 winner Nikodem Wisniewski for AMG Team Williams Esports, sitting in the final podium spot. With just five minutes left, the European Le Mans Series driver dived down the inside of Virage de Mulsanne but ran wide. 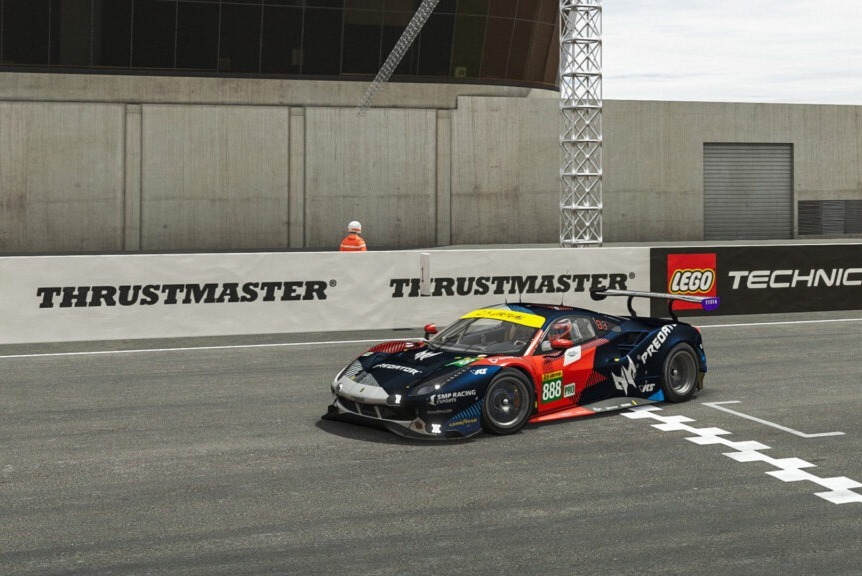 Then on the final lap at Terte Rouge, when right behind the AMG Williams and making his way ahead of the lapped #51 Ferrari, Lehmann went off and into the barrier. It was a bold attempt and thankfully was still able to finish in fourth.

But, it was Team Redline, who took its second 24 Hours of Le Mans Virtual victory in a row and pocketed the $125,000, with R8G Esports taking the GTE chequered flag first.