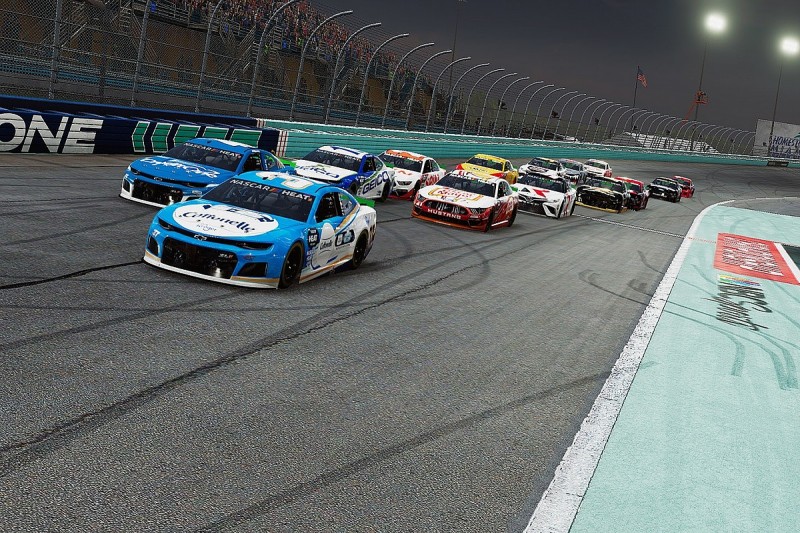 The league, a collaboration among Motorsport Games, NASCAR and the Race Team Alliance, features 14 eNASCAR teams and is played on NASCAR Heat 4, the newest iteration of the NASCAR video game franchise.

Each team features one Xbox player and one PlayStation 4 player.

In the opening Xbox race, Justin Brooks of the JTG Daugherty Throttlers led the field to the green flag in the season-opener, which quickly went under yellow due to a first-lap crash on Lap 1.

Diego Alvarado was able to get out front on the ensuing restart and led until he made a scheduled green-flag stop halfway through the race.

The caution flag flew once more with 23 laps to go and it was Slade Gravitt who took control on the restart.

The battle from that point onward was fierce with nothing between the frontrunners as they sliced and diced for the top spot. Ultimately, Brooks would prevail and maintain control despite an attempt by Gravitt on the inside.

A late caution set up a two-lap shootout, which turned out to be no issue for Brooks. While Daniel Buttafuoco and Gravitt battled over second, Brooks was able to skip away and take the win for JTG.

Winless no more!@NJobes25 puts @HendrickGC in Victory Lane for the first time in the eNASCAR Heat Pro League: https://t.co/pKBfkg6Ln4 pic.twitter.com/aKOR9urIPa

Leavine Family Gaming's Josh Harbin led the field to the green flag, and the tempo of the 50-lap race was high from the beginning with the leaders all vying to command the early laps.

They were able to get away from the rest of the pack, but fuel conservation quickly became a factor.

Hanna returned to the race lead after the first set of stops, but he needed to make a second stop with 15 laps to go.

The lead changed hands several times over the next few laps, and only in the final seven laps did the picture become clearer.

Nick Jobes was saving fuel all race and appeared to have enough in the tank as he took over the race lead. Ultimately, Jobes was able to take the checkered flag and delivered the team their first victory.