Ingram was locked in an intense battle with fellow Skoda Fabia R5 driver Filip Mares, the pair swapping places several times throughout the rally while battling for class victory and the overall podium.

Ingram entered the last stage 0.6s ahead of Mares but lost 0.9s on the rally ending Kasava test - the longest of the event - with 2017 Junior Under 27 champion Ingram putting his time loss down to running wide on the second-last corner of the rally.

British driver Ingram had been targeting the ERC1 Junior championship thanks to its prize fund, which guarantees a subsidised entry to the final two rounds of the ERC season in Cyprus and Hungary.

Without the prize win, Ingram will have to make a decision on whether to fund the final two rounds himself in pursuit of the overall ERC title.

Reigning champion and Citroen C3 R5 driver Alexey Lukyanuk - who Ingram demoted from the points' lead in Barum - finished outside the points places and only scored three bonus points for his second leg position.

Lukyanuk had been one of three contenders for overall victory along with last year's ERC Junior U28 champion and WRC2 regular Nikolay Gryazin and eventual winner Jan Kopecky, who scored his eighth Barum Rally win and fifth in a row.

Gryazin's bid for victory ended when he picked up a puncture on Saturday morning and lost two minutes, then had a high-speed crash that destroyed the left-rear of his Skoda Fabia on Sunday when charging up the leaderboard.

Lukyanuk meanwhile had retired on Saturday with a puncture that had gone down to the rim and damaged his C3's front-left suspension and he restarted the next day.

Mares and Ingram completed the overall podium positions, a minute behind factory Skoda driver Kopecky, with Tomas Kostka fourth and Marijan Griebel fifth, who will compete in next week's Rally Germany in the WRC2 category. 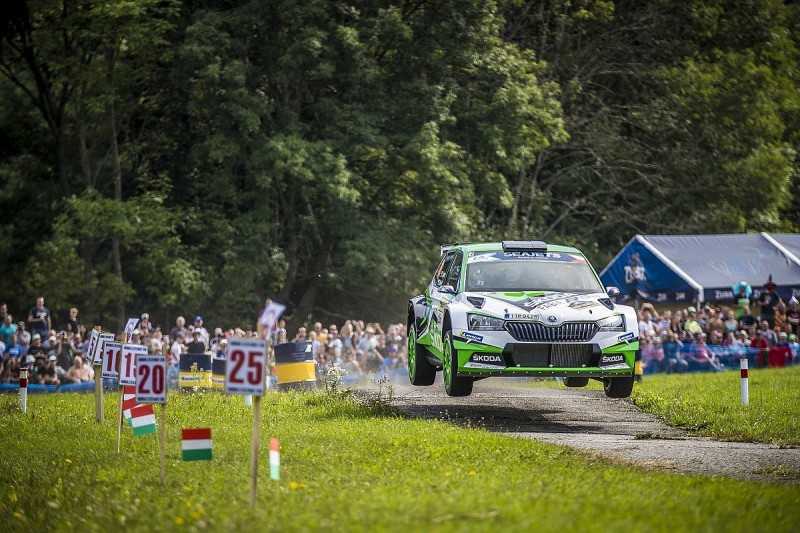