Since the unification of Grand-Am and the American Le Mans Series in 2014, no team in the IMSA Sportscar Championship has come close to the success of Action Express.

While studying in Edinburgh for a higher national diploma in engineering, he scraped together the money to race a five-year-old Van Diemen in Scottish Formula Ford against the likes of Allan McNish.

"I could beat people in old cars who weren't organised or didn't have their car set-up right, but I didn't stand a chance against people that were well-organised and had better equipment," he says. "I recognised that I wasn't going to progress there but I seemed to have a knack for understanding the cars and making them go fairly fast."

Having set his mind on a career in engineering, he designed tyres for Avon, then won a scholarship for a masters degree in vehicle dynamics at Cranfield which expanded his horizons. A spell at Leyton House to work on its Formula 3000 programme followed, but when the plug was pulled at the end of 1990, he returned to Cranfield for a second time - this time studying aerodynamics.

With two degrees under his belt, Watt was suddenly hot property and Leyton House's F3000 technical director Ralph Bellamy - an oft-forgotten element of the design team on the Lotus 78 who had previous experience with Lola - put in a good word with then-Lola boss Mike Blanchet. 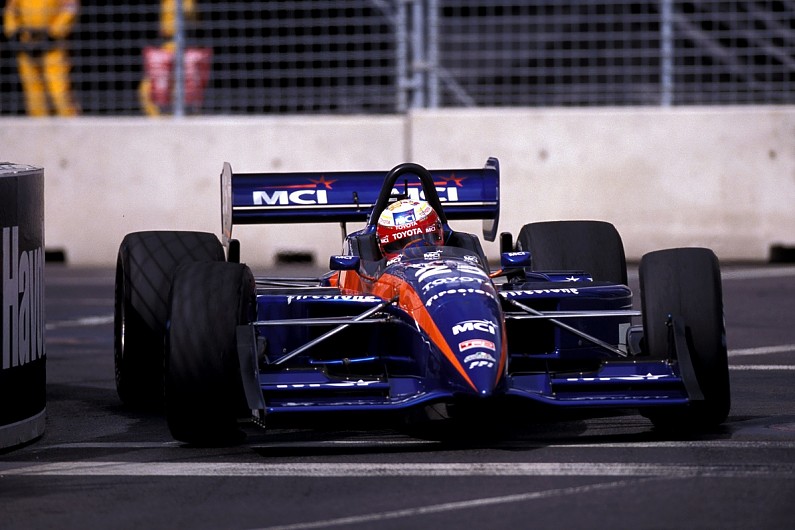 Watt's initial responsibilities were focused around F3000, but it wasn't long before he was settled in IndyCar racing, providing engineering support to several Lola customers - including Dick Simon Racing, who taught him the art of oval racing. This he combined with working in the Huntingdon drawing office under John Travis, before he moved to join Cal Wells' Arciero-Wells team (Max Papis pictured above in 1998) under the technical leadership of McLaren M23 designer Gordon Coppuck.

"He and Ralph were great mentors to have," he says. "If you learn half of their things, then you're doing pretty well."

After 167 starts grappling with Toyota engines that were often underpowered and unreliable - a severe hindrance in an era where manufacturer support for engine programmes was at its peak and power output pushed 1000 bhp - Watt engineered Cristiano Da Matta to the team's first win at Chicago in 2000, but it counted for little as team owner Cal Wells had moved into NASCAR and was closing his CART team to concentrate on stock cars.

"I love fixing things that are broken, it's not performing to its ability and its supposed to win races" Iain Watt

Watt's own taste of NASCAR wouldn't come until late 2007, following race-winning stints in single-seaters first with Team Green - engineering Dario Franchitti (below, with Watt) to a fuel strategy victory at Cleveland in 2001 - and then Mo Nunn Racing as journeyman driver Alex Barron, replacing the injured Felipe Giaffone, scored a famous 'spin and win' at Michigan in 2003.

"We knew we had a good car, we had the lowest drag configuration of anybody and in those days the cars were very much drag-limited on two-mile tracks like Michigan," Watt recalls.

"It was a case of 'how brave are you going to be', kind of the same as 'how early do you go to wets?' You can't go too early because then you're just nowhere, and you can't run too little downforce otherwise the guy can't stay flat, but you can't have too much that you're being overtaken by having too much drag either.

"We seemed to strike the balance, because we were racing primarily Dallaras and we had a G-Force, which was a relatively low-drag car anyway. But our configuration was a lot less than other people's, it was a one-step adjustment less." 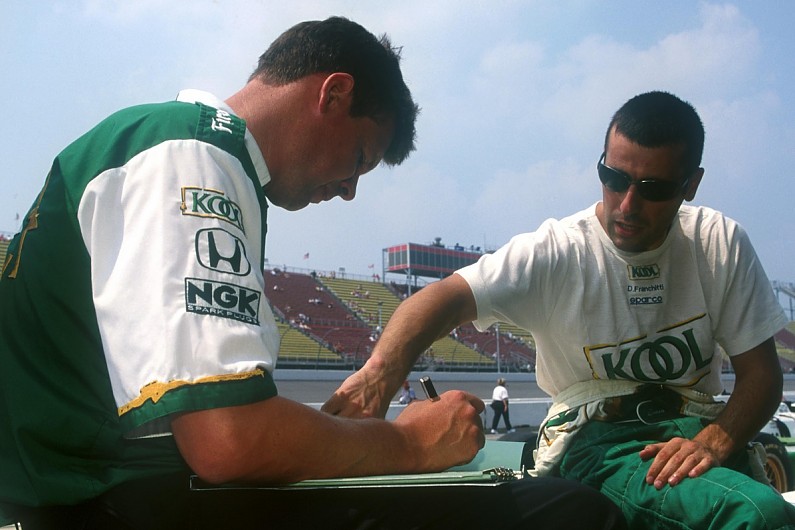 His next spell at Cheever Racing - following Barron, "it's a small world and everybody knows everybody" - was less successful, although he got to diversify into sportscars when team boss Eddie Cheever acquired the rights to the Fabcar Grand-Am chassis.

The car had been struggling against the supremacy of the Riley and Crawford chassis, and Watt was tasked with redesigning it. Renamed the Coyote, it flew in Christian Fittipaldi's hands, but a succession of different co-drivers hampered the team's progress.

"I love fixing things that are broken, it's not performing to its ability and its supposed to win races," he says. "We didn't win any races with Eddie but there are reasons for that when you had an AB driver line-up. We could sit on the front row and we could lead races with Christian at the time, but we couldn't do it when the other guy got in the car, he invariably would spin off or crash.

"The Grand-Am cars were only 500 horsepower cars, so they were very much momentum cars and it was very easy to over-drive them. Just because you can brake late, it doesn't mean to say that you should brake late."

Eventually, Watt gave into a persistent Ray Evernham - "he had been asking me for a number of years to come and work for him, but when he asked in 2007 it was the right time" - and took the plunge to move into NASCAR, led by a mixture of curiosity and a conviction that it was moving away "from the good-old crew chief days to some proper engineering".

Watt's role was centered around injecting new ideas into the organisation - then the works Dodge team - but compared to IndyCar and sportscar teams, he found the pace of change much slower with flexibility hindered by the demands of building new cars several weeks in advance. 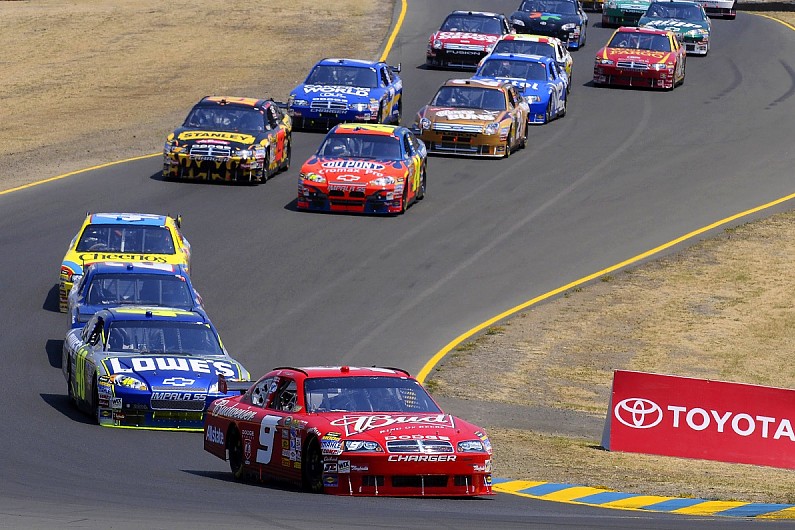 "In NASCAR, each driver is dealing with 12 cars and they've got a whole team of people building cars behind the scenes, because there's a good chance that they will get destroyed," he says.

"It takes a lot to prepare one of those racecars, so you have to be at least four or five weekends ahead, otherwise you're going to run out of cars because they race so frequently."

Key to getting by in NASCAR is not re-inventing the wheel, and making the best of the equipment with its limitations.

"You can say that they're ill-handling or whatever, but somebody is going to win the race and get the trophy, so it doesn't matter whether we're going to race lawnmowers," he says.

"They're big, heavy cars on tyres that have high degradation because the tracks have high degradation, but somebody has still got to work out how to get their combination of parts, driver and engine to the flag first. You're not going to re-design the car at the racetrack - you may get some ideas, but all you can do at the racetrack is really adjust your way out of trouble for track conditions or whatever you're dealing with.

When Evernham's team - taken over by Liverpool FC investor George Gillett - was merged with Richard Petty Motorsports and major cutbacks were made, Watt found himself looking for a new job. He soon found one at AXR, run by 1983 NASCAR Cup-winning crew chief Gary Nelson, and has remained there ever since.

The team's mantra is 'expect to win' and whether over 24 hours at Daytona or a 100-minute thrash at Long Beach, it has proven adept at doing just that. 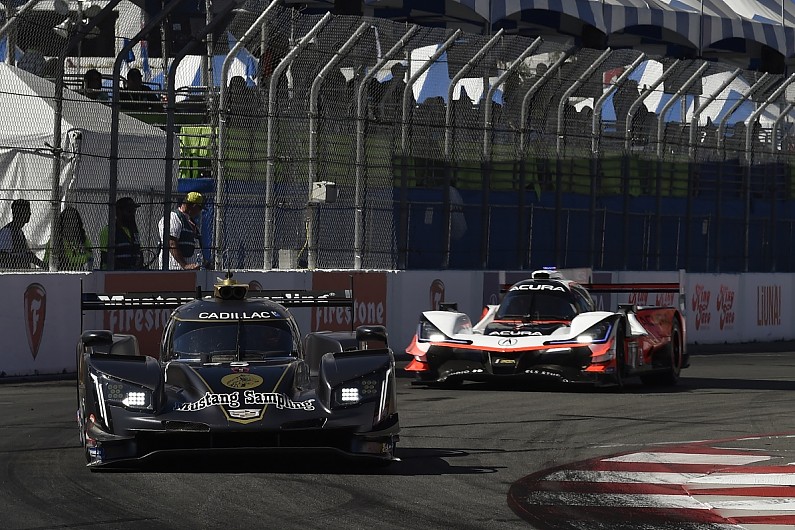 "Nobody had a spring in their step, nobody was ready to go, they had almost sucked all the enjoyment out of motor racing, which at the end of the day is a sport. We're supposed to enjoy what we do. If you don't put yourself in a position to say, 'I'm ready', then you haven't done yourself justice."

Watt won't compare AXR to other teams he's worked with - "that's like comparing Jim Clark to Michael Schumacher, they're extremely hard to compare, there's just teams that can make it happen and teams that can't" - and says it's a combination of factors that have contributed to its success.

"I don't think there's any one thing. I consider us to have a very good group of drivers, we have a good team, everybody understands what they're doing and isn't worrying about what the next guy is doing, they're worrying about how can they do their job the best they can."

Watt admits he sometimes reflects on opportunities to work in Formula 1 that he passed up, but has no regrets about his path.

"I was in Japan doing F3000 and working all over Europe doing odd-jobs with Lola, it took me with the EuroRacing Team to Le Mans in 1992 when they ran the Formula 1 Judd V10 engine [for Heinz-Harald Frentzen, Charles Zwolsman and Shunji Kasuya]," he says. "But when I came to America, I liked it and when Toyota wanted to bring me here full-time, it was quite an easy decision. 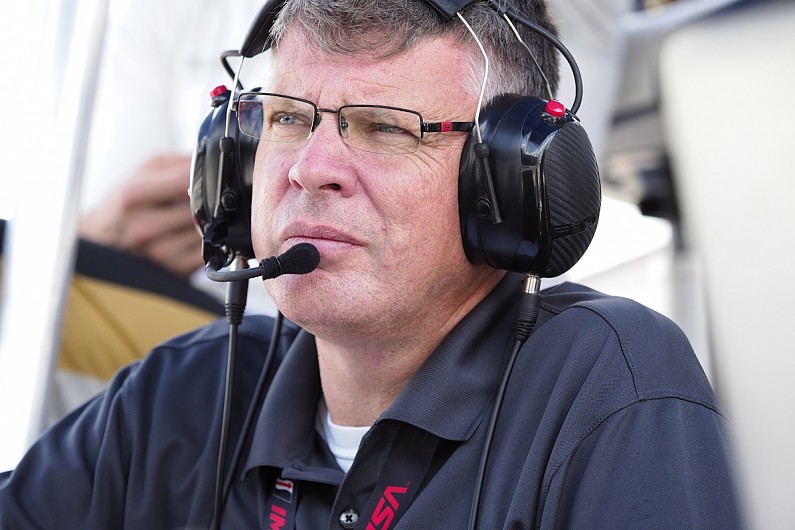 "I chose not to go to Formula 1 when I was at Leyton House because I wanted to see more of the whole car. In those days there were 20 or 30 people an F1 design office, which was easily 20 people more than the drawing offices I was used to working in when I was at March, but they're obviously nothing in comparison to now.

"It's a project management exercise nowadays rather than an engineering exercise. When you manage so many people, ideas can be diluted and it's like working in treacle. It's not very dynamic.

"You never know where life would have taken you if you'd taken a different turn, I have no regrets about anything but I often wonder where life would have taken me if I had chosen to go Formula 1 racing. There were opportunities, I know that, but I chose to do aerodynamics at Cranfield and ultimately allowed Lola to push me towards going to America."

You're not going to be a successful engineer without good drivers, but it can still be like the keystone cops when you come to pit so you need a good team too. It's never just one person that makes the difference.

Engineering on a racecar isn't curing cancer, it's not sending rockets to the moon, so keep it simple. Typically there's a reward for a complex solution, but often the simple solution is also the best one. 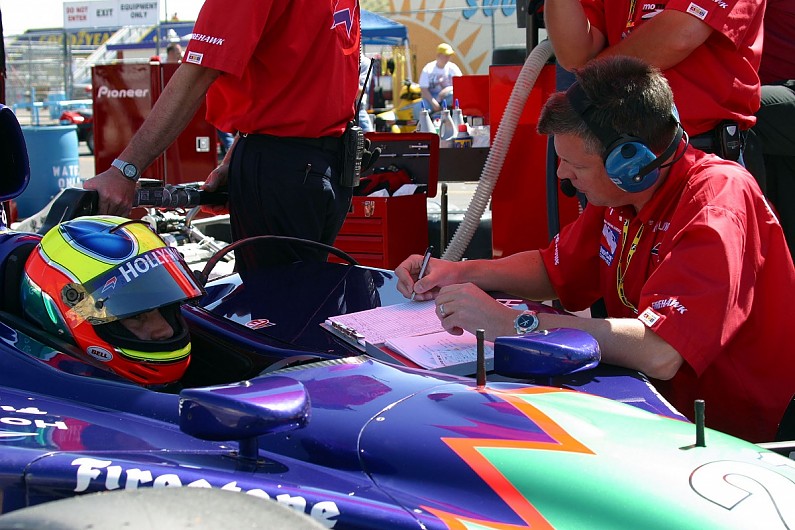