The 2021 DTM title battle will be decided at the famous Norisring street circuit in Germany this weekend. Here's how you can watch the final round of the season.

While the DTM's switch to GT3 machinery was seen as a turn off by many, the championship has delivered some exciting racing action on track this year, with four drivers in shot of the title heading to the Norisring.

Lawson has arguably been the most consistent driver of the season so far, finishing on the podium in all but three races in the AF Corse Ferrari.

Van der Linde was the title favourite for much of the season, but his title hopes took a hit at the Red Bull Ring and Assen rounds - and he now faces a 14-point deficit to Lawson with two races to go at Norisring.

Gotz can be considered an outside contender for the title in the HRT Mercedes, while BMW's Marco Wittmann doesn't have any more than a mathematical chance of winning a third championship in the DTM following a disastrous weekend last time out at Hockenheim.

This weekend's Norisring round will see Super Formula and SUPER GT champion Nick Cassidy making his first DTM appearance since the 2019 season finale at Hockenheim, replacing Red Bull Formula 1 reserve Alex Albon in the second of the AF Corse Ferraris. 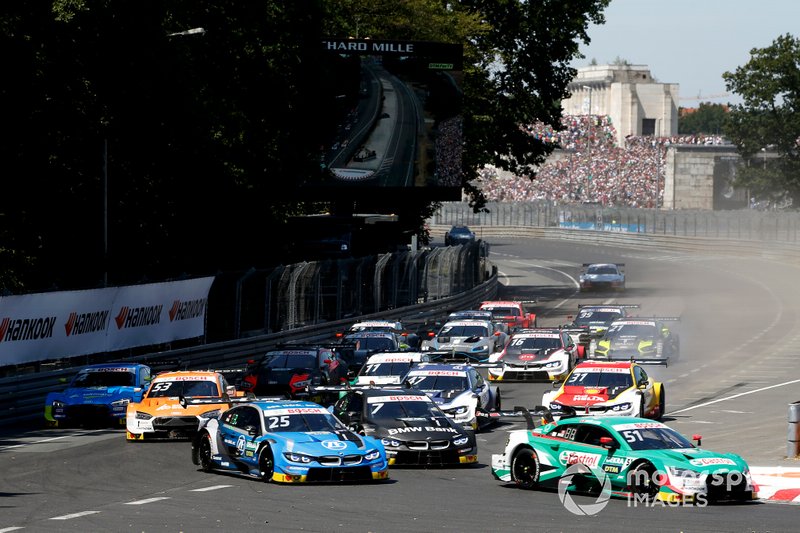 The Norisring race weekend will begin on Friday with two 45-minute practice sessions.

A pair of races will follow over the next two days, the starting grids for which will be decided by separate qualifying sessions.

How can I watch the Norisring DTM races?

BT Sport ESPN will broadcast the DTM finale from the Norisring in the UK.

The coverage for the two races will begin at 1:15pm each day. The two qualifying sessions will also be shown live in the UK, starting 9am on both Saturday and Sunday.

Can I stream the Norisring DTM round?

How many laps are the Norisring DTM races?

Both Norisring races will run to a duration of 55 minutes plus one lap, with the DTM maintaining the same format as used last year.

Will there be fans at Norisring?

Yes, fans will be allowed at the Norisring. To purchase tickets, click here.