Wittmann had completed just one lap in qualifying after what BMW described as a "failure in the engine area" and lined up 18th.

He opted to take the strategic gamble of stopping at the end of the first lap, which left him with 38 laps to manage his tyres on a high-wear, high-speed circuit.

But Hankook had suggested that BMW had made the biggest step in understanding the tyres between Friday's practice sessions, and Wittmann quickly demonstrated it.

Boosted by an early safety-car period that lasted three laps when BMW's Joel Eriksson slowed and pulled off the track at Turn 7, Wittmann began to carve through the field progressively.

He had moved into the top 10 after 13 laps and cycled to the front when polesitter and race leader Rene Rast and the chasing pack made their mandatory pitstops.

R-Motorsport's Ferdinand Habsburg mirrored Wittmann's strategy as the Aston Martin squad made one of its usual strategic gambles, meaning Rast had to clear Habsburg before hunting down the leader.

Lapping around four seconds quicker than Habsburg and two seconds faster than Wittmann initially, Rast cleared the Aston when Habsburg got a poor exit out of the high-speed Turn 10.

In clear air, Rast took more than 20s out of Wittmann's lead across the second stint but was only able to close to within 8.2s at the flag, meaning his BMW rival took his second win of the 2019 season.

Loic Duval rounded out the podium after storming past Habsburg when the Aston's tyres dropped off late on, having also dispatched BMW's Bruno Spengler. 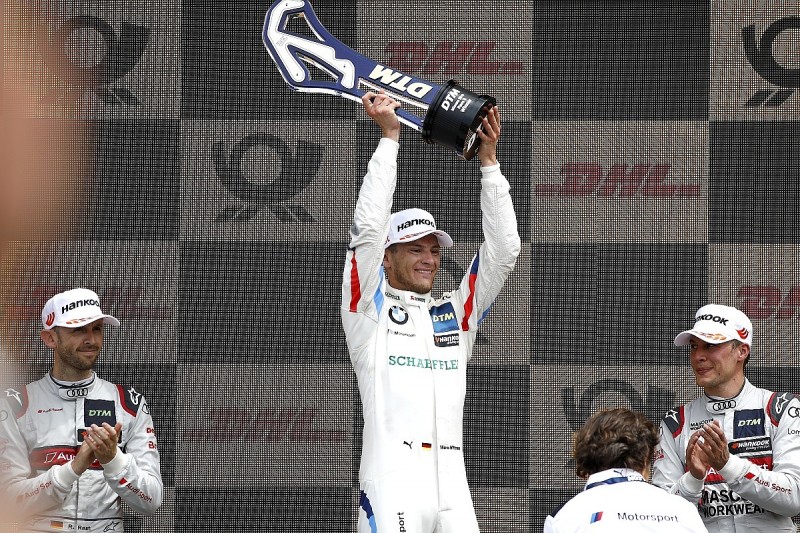 Spengler took fourth after a storming start from sixth on the grid initially lifted him into third after WRT Audi's Jonathan Aberdein made a poor start from the front row.

Nico Muller and Mike Rockenfeller were matched on strategy, but the former came out on top for fifth place.

Philipp Eng was seventh after a late duel with BMW team-mate Sheldon van der Linde, while Aberdein recovered from a poor start and a delayed pitstop to finish eighth - although he remains under investigation for a potential pitlane infringement.

Van der Linde and Timo Glock rounded out the top 10.

Dovizioso was able to stay ahead of the Aston Martins of Daniel Juncadella, Habsburg - who plummeted down the order - and Jake Dennis, and also impressed in a flurry of wheel-to-wheel racing midrace.

Paul di Resta retired from the race eight laps from home, and Robin Frijns finished 23 laps down after returning to the track following a lengthy delay spent in the pits.