Edoardo Mortara took a superb win for Audi in the final race of the DTM season at Hockenheim, but could not prevent Marco Wittmann from wrapping up his second crown

Starting sixth, Mortara dropped back off the line but advanced from seventh at Turn 1 into the lead during a sensational opening six laps of racing.

Poleman Antonio Felix da Costa led in his BMW from the Mercedes of Gary Paffett, but their brusque early fight ended in dramatic fashion at the Mercedes Arena on the fourth lap.

Briton Paffett tagged the back of the Portuguese - who will not return to the series next year - as he was sweeping across to take the racing line, sending the BMW spinning off.

Paffett was given a drive-through penalty for the move, promoting Wittmann to a brief lead ahead of Mortara - who had passed Robert Wickens, Maxime Martin and Tom Blomqvist during the first two laps.

Wittmann's lead lasted just half a lap, Mortara forcing the German to defend the inside of the Spitzkehre and then getting the cutback on the exit to move into the lead.

Italian Mortara then built a 6.5-second lead over Wittmann by the time they simultaneously made late pitstops on lap 23 of the 39-lap race.

Once they had resumed Wittmann was only 5.1s adrift of leader Mortara, but crucially he was down in seventh behind the yet-to-stop Audis of Mike Rockenfeller and Nico Muller, and earlier pitters Christian Vietoris (Mercedes), Blomqvist (BMW) and Paul di Resta (Mercedes).

Wittmann knew that fifth would be good enough for the title, and knowing that Rockenfeller and Muller would be taken out of the equation he was effectively secure on the road.

He tentatively tried to pass di Resta twice at Spitzkehre, but the Scot wasn't budging and held firm.

Sure enough, once Rockenfeller and Muller were out of the way it was Vietoris second from di Resta and Wittmann, as Blomqvist gradually fell back behind BMW stablemates Martin and Timo Glock.

Mortara extended his lead as far as 6.1s, before bringing his Abt Audi home 3.0s to the good over Vietoris. 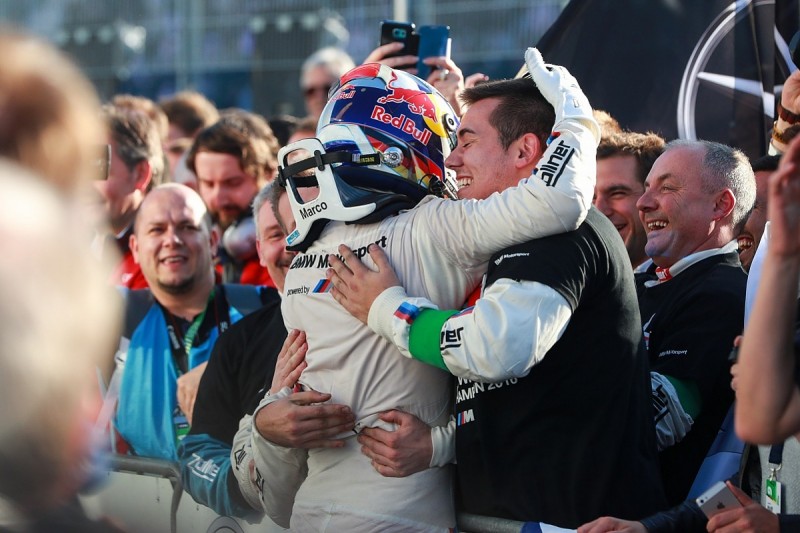 Di Resta completed the podium after a spectacular drive from 18th on the grid, with Wittmann bringing his RMG BMW home fourth, which was enough for him to win the title by four points.

Glock shadowed the new champion, and was followed by Martin and Blomqvist.

Jamie Green recovered from being shoved wide in the early going to take eighth for Audi from Wickens, while BMW's Martin Tomczyk scored the final point on his farewell DTM appearance.

Paffett finished outside the points, while da Costa retired when he lost a wheel on his out-lap after his pitstop.