Starting second on the grid, Auer wasted little time to pass the heavy-ballasted Audi of polesitter van der Linde, diving down the inside of the Abt Sportsline driver into Turn 2 to take the lead of the race.

Once in front there was no catching Auer, the Winward Mercedes driver leading all laps outside the pitstop cycle to clinch a seventh career win in the DTM - and second in as many weekends.

The Austrian driver’s run to victory was made easy by title contenders van der Linde and Lawson battling for second in the opening laps of the race, with the South African having to aggressively defend his position with 25kg of extra weight on his car.

Lawson managed to overtake van der Linde into the Turn 7 right-hander on the opening lap, only for the Audi driver to strike back at the following turn.

Both stepped up their aggression on the next lap, banging wheels as they exited the hairpin at Turn 6. There was more contact under braking for the Turn 8 left-hander, van der Linde tagging the back of Lawson and unsettling his Ferrari - before overtaking him into the apex of the corner.

The stewards took note of the incident and handed van der Linde a five-second penalty, effectively leaving him out of the fight for second place.

Lawson wouldn’t need the penalty to pass van der Linde, however, as a slow pitstop for the Abt Sportsline driver would allow him to jump back ahead of him.

Once in clear air, the AF Corse Ferrari driver couldn’t do much about Auer's lead up front, but the second-place finish allows him to take a significant 14-point lead in the final round of the season at the Norisring next week. 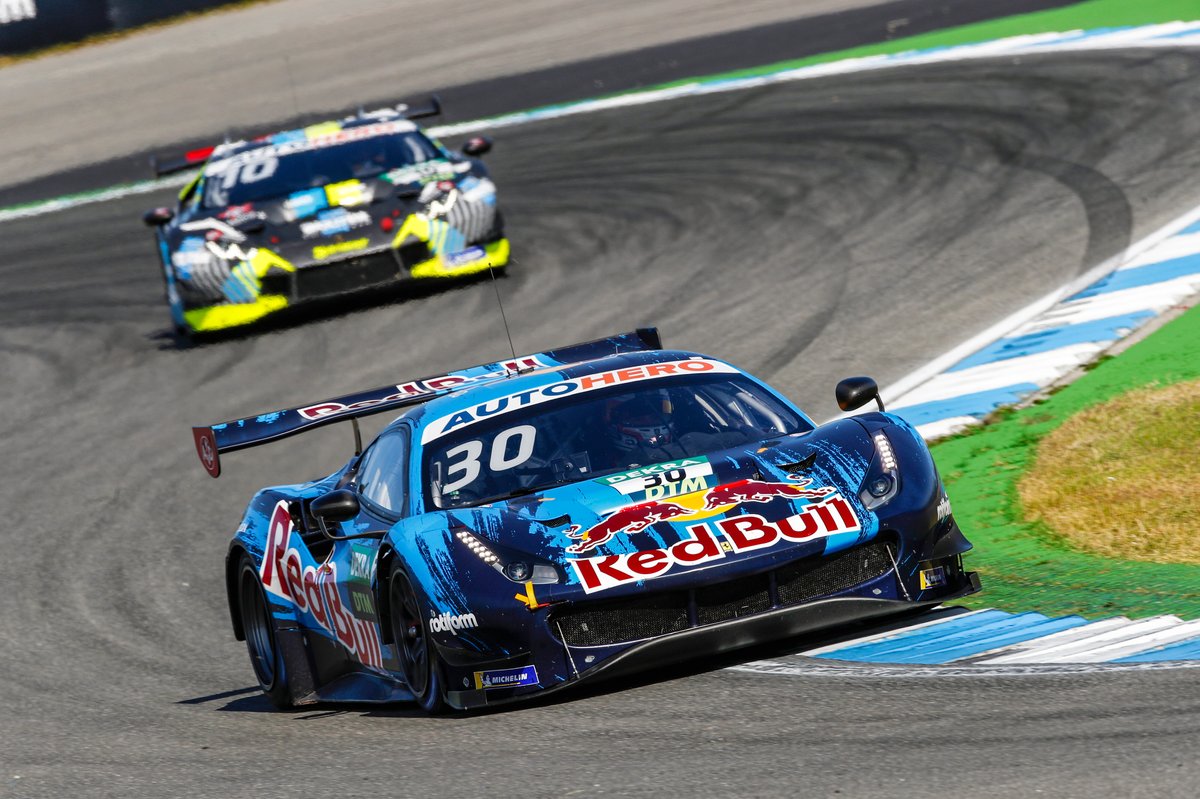 Lawson’s title hopes were boosted by van der Linde hitting more trouble later in the race, eventually slipping to 10th at the flag.

With the extra weight on his Audi, van der Linde was passed by Mercedes cars of Maximilian Gotz, Daniel Juncadella and Philip Ellis, leaving him sixth on the road. But it was a five-second penalty for not serving his previous sanction in the pits that struck more damage, dropping him a further four places in the final classifications.

Gotz finished third behind Lawson to keep his title hopes alive heading into the final round of the season, while Auer’s tea-mmate Ellis passed Juncadella on the final lap to finish fourth.

Marco Wittmann’s hopes of winning the DTM title are all but over after the Walkenhorst BMW driver finished outside of the points for a second race in a row, not helped by a five-second penalty for a pitstop infringement.

After engine issues left him near the bottom of the grid, 2016/17 Formula E champion Lucas di Grassi finished 18th in his wildcard outing for Abt Sportsline Audi.