The DTM and SUPER GT have announced the regulations for their joint race at Fuji, which largely reflect the German touring car series' current format

The event, which is being billed the "SUPER GT x DTM Dream Race", will take place on November 22-24 after the culmination of both the DTM and SUPER GT seasons.

Details of the regulations were announced by DTM boss Gerhard Berger and his SUPER GT counterpart Masaki Bandoh in a press conference at Fuji on Saturday morning.

The DTM's sprint format of two 55-minute plus one lap races is retained, as is the mandatory pitstop, and there will be no driver changes or refuelling as there is in the SUPER GT endurance format.

While the DTM's spec Hankook tyre will be used across the field, the joint race will not use the DTM's push-to-pass system or DRS.

"On behalf of the ITR [the DTM's organiser], and all the manufacturers represented in the DTM, I would like to thank Bandoh-san, the GTA, and the representatives of Fuji Speedway for their continued co-operation," said Berger.

"Our co-operation works so well because we share the same values: genuine, exciting motorsport is always our top priority. And that's what we want to offer our fans in both Europe and Asia.

"The 'Dream Race' in November marks another milestone in the partnership between GTA and ITR. In 2017, we hosted the first joint demo laps for SUPER GT and DTM cars at Hockenheim and Motegi.

"Last year, we introduced our common [Class One] technical regulations. And this year, we will be racing together for the first time.

"We'll get our first taste of that at the DTM season finale in Hockenheim in October when we welcome three guest starters from Honda, Nissan and Lexus.

"Then the 'Dream Race' in Fuji will be the grand finale of our 2019 motorsport calendar." 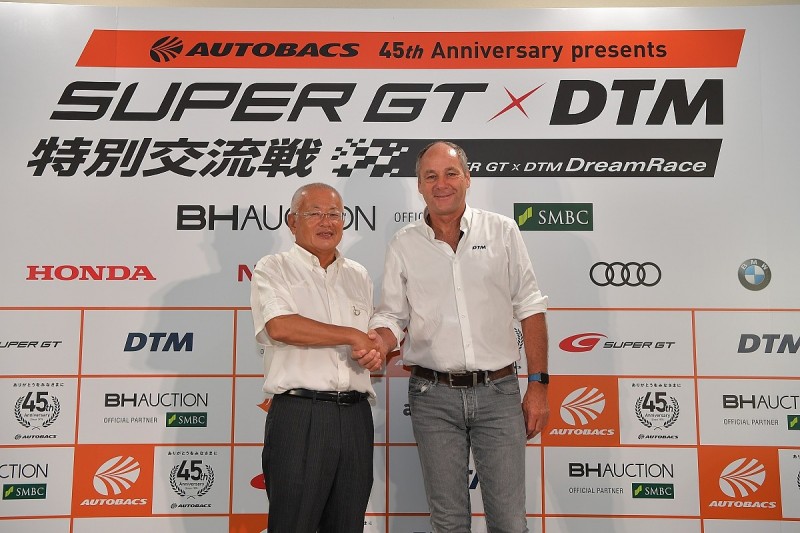 Bandoh, the chairman of SUPER GT's parent organisation GTA, said: "GTA has been discussing the integration of the technical regulations with ITR since 2010.

"It's been a long and bumpy road. But, with everybody's efforts, we were able to conduct a demo run at Hockenheim in 2017 and make people aware of Class One and SUPER GT.

"Both GTA and ITR have been working steadily together to create the common technical regulations for Class One.

"Having the common conviction that the same technical regulations could be established in Europe and Asia, we then developed detailed plans and held advanced discussions to establish regulations which help to unify, while also reducing costs.

"We are very pleased to be able to hold a race based on the Class One regulations in Japan, and would like to extend our heartfelt gratitude to Chairman Berger and the manufacturers."

Bandoh added that both series plan to "further develop" the Class One regulations to entice more manufacturers.

Autosport previously revealed that the DTM and SUPER GT had evaluated Balance of Performance to equalise the two types of cars, and this remains under consideration for the Hockenheim and Fuji weekends.

Berger said he expected between six and 10 DTM cars to head to Fuji due to the logistics of transporting the machines and their spare parts. Each DTM manufacturer is expected to be represented.

A DTM statement said driver choices would be revealed at a "later date" and Berger suggested it was possible that the manufacturers could bring two drivers to split the races, but that such a decision had not been finalised.