The next generation of DTM cars will have reduced levels of downforce, when the Class One framework being jointly-developed with Super GT is introduced in 2017

Work between organisers of the two series and their manufacturers continues, with Audi, BMW and Mercedes representatives holding weekly meetings, and then monthly briefings with Honda, Lexus and Nissan.

Both categories already share chassis and aerodynamic DNA, and while the cars will continue to resemble the existing machinery, current work is focused on arriving at reduced levels of downforce to reduce speeds and costs.

"We want to reduce the downforce a little bit because the cars are getting too quick," DTM technical chief Michael Bernard told AUTOSPORT.

"Also we are looking to get the running costs down.

"If you see how the DTM cars are cornering, it's very strange. They are just passing any kind of kerb like it is not there.

"The car is strong enough to resist this for 100 kilometres, but at the end of the race many parts are destroyed, so the running costs at the moment are too high.

"We are looking to get the ride-height up and to find solutions as to how we can get the running costs down."

Having a first version of the technical regulations written by the end of August is the target.

Work on defining the new, two-litre, four-cylinder engines has finished and monocoque work is rated at 90 per cent complete.

"We adapted a lot of solutions from the Japanese, because they already have the four-cylinder, two-litre, in-line engines," Bernard said.

"The philosophy of the Japanese people is to leave the engineers more freedom, especially in the area of green technology.

"We are not against green technology, but in motorsport if you keep the door open it's getting more and more expensive." 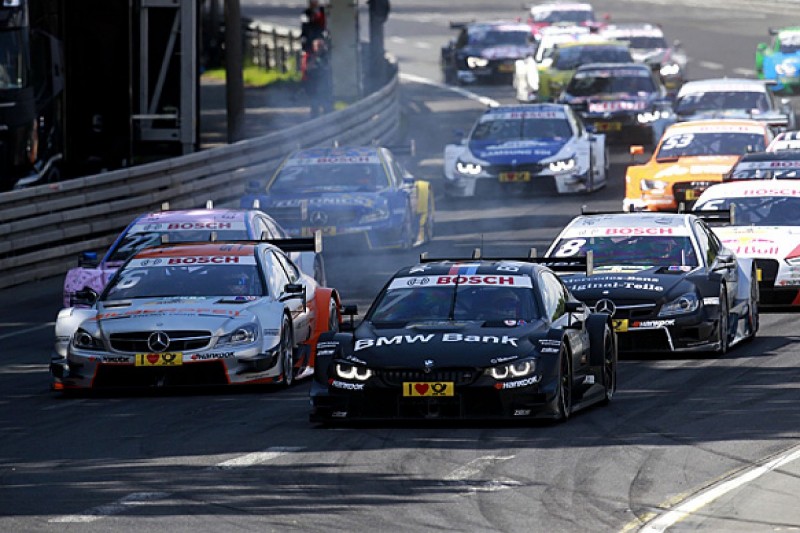 As Michael Bernard notes, DTM cars corner in a way unlike any other conventional tin-top, which is good to watch and fast - both part of the spectacle - but a bit unnecessary.

And, as has been discussed ad-nauseam in Formula 1 over the years, too much aerodynamic grip can hurt the quality of the racing.

So trimming downforce back a little bit won't hurt in the DTM, and I'm sure the manufacturers won't mind the cost savings that follow, based on reduced demand on running gear.

At each DTM round, Audi, BMW and Mercedes bring a couple of old cars for passenger rides. BMW had a very cool M1 Procar chassis, from its shortlived 1979 and '80 championship, at the Norisring. It's such a strong, clean-looking car.

'Clean' isn't a word you would apply to current DTM cars, which have more winglets than you could poke a stick at.

Sure, they're intricate pieces of aerodynamics, and no doubt make the cars that little bit faster.

But they aren't cheap to refine, don't really add anything to the product and look a bit clumsy, especially when they're knocked off and sitting on the circuit.

At the risk of being an armchair engineer, in the bid to reduce downforce in the DTM, defining a range of additional winglet-free areas on the cars - ie the front bars - would be a great place to start.

DTM needs to be included in F1 superlicence system - Coulthard