Edoardo Mortara took a masterful win in the first race of the weekend at the Lausitzring, while Rene Rast rolled his Audi out of contention in a spectacular crash

The field was bunched together after an early safety car, when Rast was clipped from behind at the exit of Turn 5 by Audi stablemate Loic Duval with 40 minutes to go.

Rast's car turned sideways to the left, dug in and then somersaulted, destroying his Audi to the point where the roll bars were exposed as the roof had disintegrated.

He escaped serious injury and was able to get out of the car and walk away unassisted, with black dust covering his face.

Rast was later admitted to a local hospital for precautionary checks, but did not complain of any pain after the incident.

The race was red flagged after the incident, with only 20 minutes remaining on the restart. 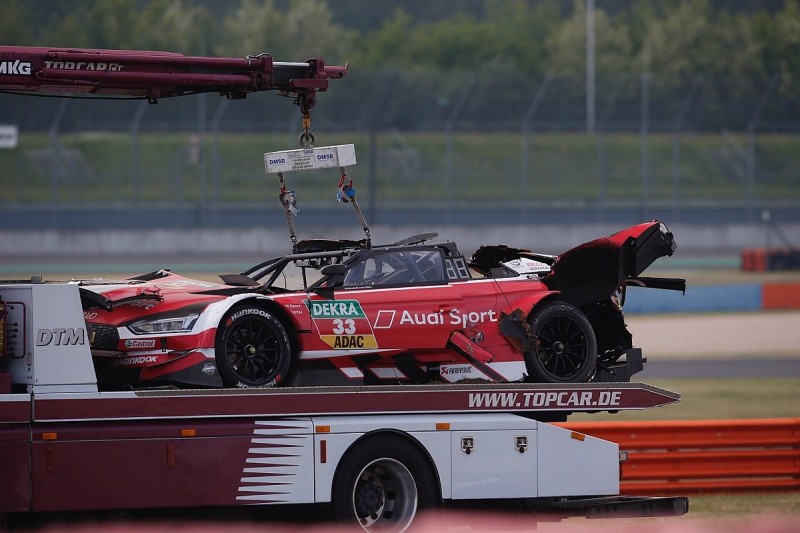 As the race resumed, a number of drivers including polesitter Lucas Auer pitted almost immediately, but it proved to be the incorrect strategy as the cars who pitted later had the edge.

Timo Glock was the first driver to unseat Auer, before Philipp Eng jumped both of them in a daring move at Turn 1.

While they battled, Mortara - who started in seventh - was closing in and a stunning pair of laps promoted him to second, before a DRS assisted pass on Eng got the job done.

Glock remained with Mortara to the flag but couldn't come back at the Italian, while Eng held on to beat early stoppers Auer and Bruno Spengler.

Paul di Resta had dropped out of the top 10 at one point, but he recovered to sixth ahead of the battling Pascal Wehrlein and Marco Wittmann.

The latter duo fought to the flag, with Wittmann holding on to take ninth. Wehrlein had earlier been held up at an opportune moment by Garry Paffett, who emerged from the pits on cold tyres, and Wehrlein was one of the drivers caught behind him.

Paffett rebounded to ninth ahead of BMW's Augusto Farfus, who had started 16th.

Mike Rockenfeller was the highest placed Audi in 11th, after a number of its cars hit trouble.

The early part of the race ran under safety car conditions, after Jamie Green hit Nico Muller leaving large amounts of debris on the start/finish straight.

Green started 18th and was tucked in behind Rast off the start. As Rast darted left to avoid Muller, Green couldn't avoid the Swiss driver and piled into the back of him, ending both their races.

Muller had been the top Audi qualifier in ninth, while Green was looking to rebound from a pointless weekend at Hockenheim where he admitted to being the "slowest of the Audi drivers" due to set-up issues.

Robin Frijns fell to the back after the first safety car and received a stop go penalty for contravening safety car rules under the next safety car for Rast. That left him 13th and the second to last finisher, after he stopped on the last lap.