Rene Rast says he didn't expect a 66-point swing in his favour after snatching the DTM championship lead from Nico Muller with a run of four victories at Zolder.

Muller sat 47 points adrift of Muller in the standings ahead of the double-header at the Belgian venue, and there was a real possibility of him falling out of title contention amid the dominance of Muller and Robin Frijns' Abt team.

But when a previously consistent Muller struggled for pace in qualifying and Frijns recorded two DNFs in four races, Rast capitalised on the situation to claim four successive victories across the two rounds at Zolder.

This has put him at the top of the drivers' table for the first time this season, 19 points clear of Muller, with only 56 on offer across the two races in the Hockenheim decider next month.

Speaking after his latest success, two-time champion Rast said he couldn't have expected such a major shift in the championship battle, having at one point conceded that he would not be able to defend his crown.

"Obviously to change the tables within eight or nine races, coming here with 40 something points gap to Nico and now almost leading the championship by 20 points, it's something probably nobody would have expected, not me," said Rast. "We almost collected all maximum points in the last four races here.

"Arriving here last week I honestly didn't expect we would be able to still win the championship because everything was just not good enough for us this year.

"So Abt, especially Nico and Robin were very strong all year. They put the laps together in qualifying, put it on pole or at least the first two rows and delivered in the race as well. And we were always kind of on the backfoot and had to catch up.

"There was no indication that all of a sudden we could turn it around. Nobody expected that and not even me. Obviously things can change quickly as we saw but obviously I'm very happy with the situation we have now."

Rast's success at Zolder on Sunday marked his sixth victory of the season and 23rd overall in his five years as a DTM driver.

He's now tied with Mattias Ekstrom as the most successful Audi driver in the DTM's history - without counting for the Swedish driver's two victories in qualifying races.

He is also now the third most successful DTM driver of all time, with only Bernd Schneider (43) and Klaus Ludwig (37) having won more races than him.

Rast, who is linked to an Audi Formula E drive for 2021, said it had always been his goal to better Ekstrom's race wins tally in the tin-top category.

"Obviously DTM has been different in the last couple of two years I would say. In the past, in the beginning of the DTM, there were more and more cars, competitors. It was more crazy the DTM.

"I think to win the DTM race in those cars, the early 2000s or 2010, was surely not as easy as it might be now. Just 10 races per year in the past [as well]. So obviously different circumstances, but I'm very happy to equal the record with Mattias." 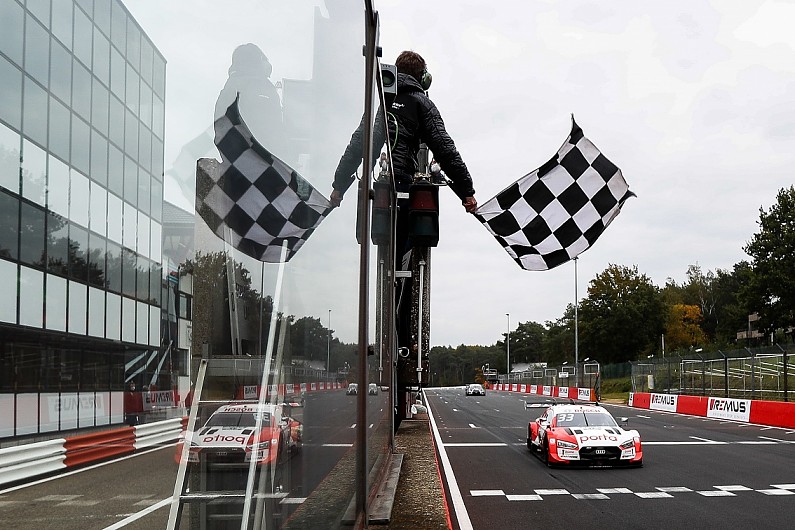