Rene Rast claimed his fourth successive DTM win at Zolder to extend his lead at the top of the standings, as Formula 1 convert Robert Kubica scored his maiden podium.

WRT Audi's Ferdinand Habsburg led the field at the start of the race from fellow front-row starter Rast, with Nico Muller getting the jump on both Robin Frijns and Fabio Scherer to move up to third position.

There was drama on lap five when BMW's Jonathan Aberdein rear-ended Scherer going into Turn 5, with the WRT driver then collecting an innocent Frijns, who was running ahead of the two.

All three drivers retired from the race, with Frijns suffering a big blow to his titles hopes with what was his second DNF in as many events.

Not long after the race went back under green, the BMWs of Lucas Auer and Philipp Eng came together at Turn 3, two corners after Auer was hit by Audi debutant Benoit Treluyer.

Eng had to pull across the track after the front-right side of his BMW caught fire, while both Auer and Treluyer also retired from the race after returning to the pits.

Following another safety car period caused by the two crashes, the race resumed on lap 11 of 40 with Habsburg leading from Rast, Muller, Mike Rockenfeller and Jamie Green in an all-Audi top five.

Habsburg and Muller peeled into the pits on lap 13, with Rast and Rockenfeller following a lap later.

This turned out to be the deciding moment of the race as both Rast and Rockenfeller got the jump on their fellow Audi drivers, jumping to first and second position, respectively.

Both Habsburg and Muller managed to clear Rockenfeller after he locked up at Turn 5, but neither could respond to Rast's pace, the two-time champion cruising to a 11-second win.

With that result, he completed a clean sweep of victories in the two rounds at Zolder, putting himself well clear of title rivals Muller and Frijns heading into the season finale at Hockenheim.

Behind, Habsburg began to fade in the closing stages of the race, allowing Muller to clear him with ease at the final chicane on lap 26 and limit the damage to in-form man Rast. 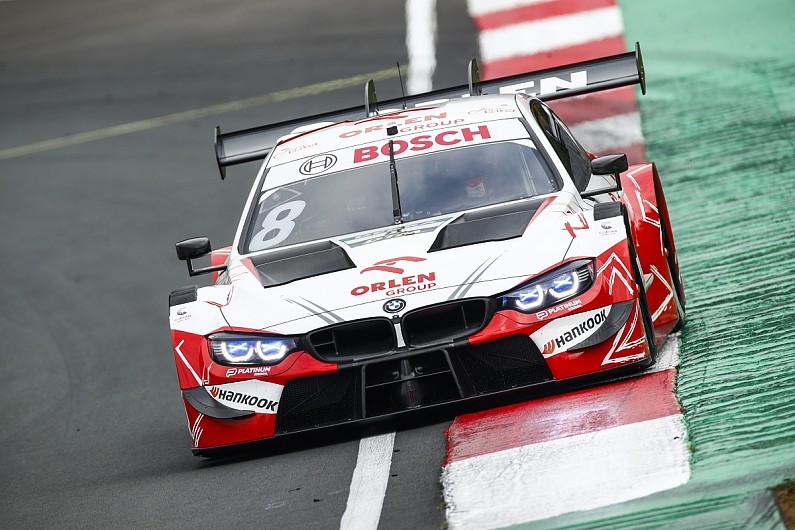 The Polish driver was up to sixth by the time the race resumed on lap 11, and got the jump on Rockenfeller and Green by making a late stop on lap 18.

Ten laps later he passed the struggling WRT machine of Habsburg, finishing as the top driver from the BMW fold in third.

BMW's Timo Glock rose from 14th on the grid to finish fourth at the flag, ahead of the Audis of Green and Rockenfeller.

Habsburg was last of the classified finishers in 10th.