Audi driver Nico Muller claimed a lights-to-flag victory at the Nurburgring on Saturday to extend his lead at the top of the DTM standings.

Having secured his first pole position since the third round at the Lausitzring, Muller made a clean start to lead reigning champion Rene Rast into the first corner.

Rast initially kept Muller honest in the battle for the lead, the gap between the two staying within a second, but Rast's pace began to fade further towards the end of the first stint, allowing the championship leader to pull a three-second advantage out front.

Muller was the first of the leaders to stop on lap 12 and after the pitstops emerged with an extended eight-second advantage, which he managed to convert into a dominant 15s victory.

This was the Swiss driver's fourth win in nine races and it puts him comfortably ahead of title rivals Robin Frijns and Rast - who enjoyed a race-long battle that was eventually settled in favour of Rast.

Frijns had passed Rast shortly before the pitstops with an aggressive move at Turn 3, but the reigning champion snatched back second position after Frijns returned to the track on cold tyres after his own stop. 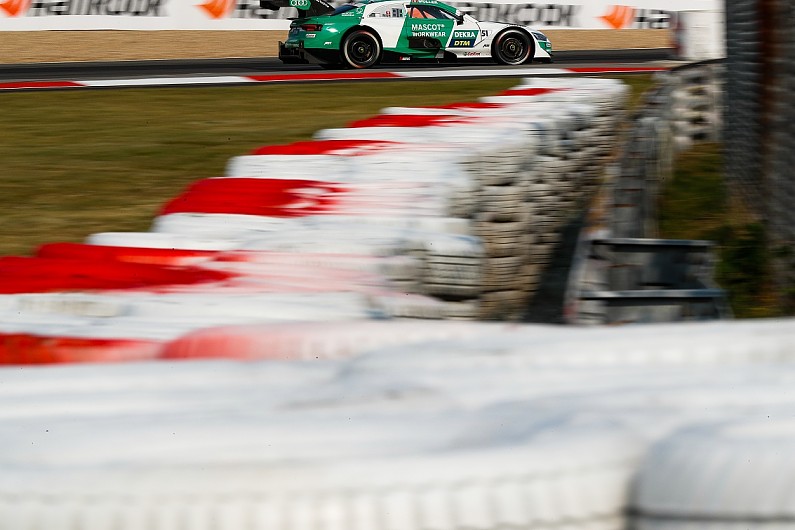 The two resumed their battle in the latter stages of the race, with Frijns appearing seemingly quicker of the two title rivals.

After an unsuccessful attempt at the Dunlop hairpin on lap 26, Frijns made a lunge down the inside of Rast heading into Turn 1 on the following lap, but ran over the inside kerbs, going briefly airborne before spinning into the run off area.

That allowed Rast to hold onto second and return to the podium after a subpar showing at Assen, where he finished fifth in both races.

Marco Wittmann bagged his second rostrum finish of the year in third as the lead BMW, beating Audi's Mike Rockenfeller, who ran as high as second after his early stop but slipped to fourth as his tyres faded.

Frijns fended off factory BMW driver Philipp Eng after his spin to finish fifth, with Timo Glock taking the chequered flag in seventh after an impressive drive from outside the top 10 that included a double pass on DTM veteran Jamie Green and BMW stablemate Sheldon van der Linde.

Van der Linde, who took his maiden victory at Assen a week ago, was eighth ahead of Audi's Loic Duval, who was hit with a 10-second penalty for crossing the white line at the entry to the pitlane.

Jonathan Aberdein rounded out the top 10 for BMW.

Formula 1 convert Robert Kubica propped up the timesheets in 16th after a disappointing showing in the ART-run BMW.