Audi's Rene Rast clinched his second DTM title with a round to spare in the second Nurburgring race, as Jamie Green survived a late challenge to win.

While Green, who ended a wait of almost two years for a victory, had to hold off a late charge from Abt's Audi driver Robin Frijns at the exit of the Coca-Cola Kurve - Frijns briefly took to the grass - the title race swung back and forth throughout.

Rast had to outscore Muller by seven points in the race, after earning two extra points over Muller - who started only 14th - for qualifying second on Sunday morning.

On the run to the Turn 1 right-hander, the title race looked as good as over when Rast made a perfect getaway to storm past Green and into the race lead.

But Green never fell more than a second behind Rast throughout the opening phase of the race, and he jumped back ahead of Rast and into the net lead following the pitstops.

Green had gained an advantage by completing his pitstop in 7.4 seconds - 1.5s quicker than Rast managed a lap before - to emerge ahead of his Audi team-mate.

Rast looked to pass Green while the British driver attempted to warm his tyres up, but failed to make a move stick and instead settled into second.

That opened the door for Muller to keep his slim title hopes alive after he lost time trying to clear the three R-Motorsport Aston Martins at the rear of the grid early on.

Muller had made into the top 10 by the ninth lap of 41 and then became the second-earliest driver to pit in a bid to make further progress should a safety car appear.

As the pitstop strategies began to shake out, Muller had done enough to keep the title race alive by a single point, running fourth to Rast's second place.

But Muller's older tyres began to tell in the later stages of the race, and Frijns helped decide the title race's direction when he swept pass Muller at Turn 1 to begin his hunt of Green, knocking Muller into fifth.

While Rast would fall to third as Frijns's tyre advantage showed, a late pass from WRT Audi's Jonathan Aberdein on Muller on the run to the Coca-Cola Kurve also demoted Muller one position - into sixth - and ensured Rast's third place would be enough for the title. 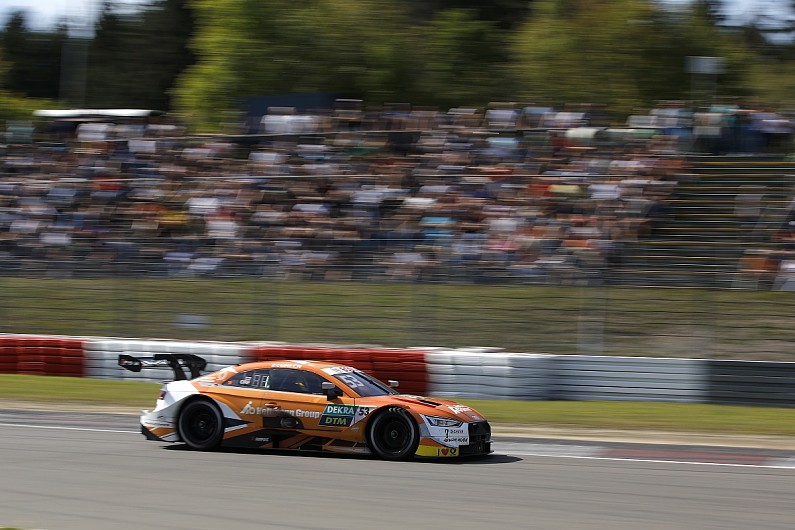 Frijns would continue to make progress and closed from being three seconds off Green to making a move on the penultimate lap, but he could not stop Green taking his first DTM win since the second Hockenheim round in 2017.

While BMW had responded strongly to defeat in the manufacturers' title at Lausitzring by matching Audi more closely on Saturday, it failed to challenge its rival on Sunday.

Timo Glock recovered from being punted into a spin by BMW stablemate Sheldon van der Linde at Turn 1 to finish ninth ahead of Bruno Spengler.

Daniel Juncadella was the lead R-Motorsport Aston Martin in 12th, with Paul Di Resta failing to start the race due to an engine problem.

Marco Wittmann was the only retiree, having come to a stop at the Mercedes Arena not long after his pitstop. He was able to get going again, but the problem would repeat itself and force an end to his race.