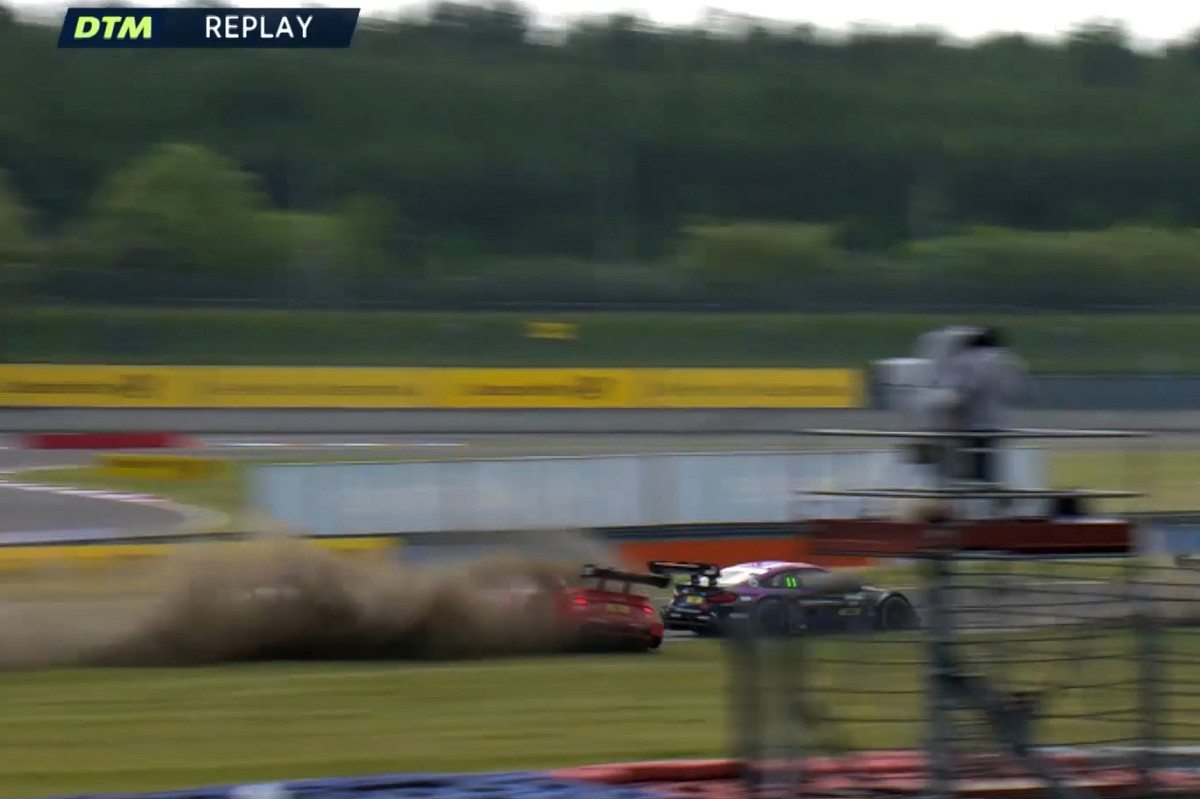 After contact with fellow Audi driver Loic Duval, Rene Rast's car took to the grass, where it dug into the ground and began a sequence of rolls. 1 / 7
Image 1 of 7 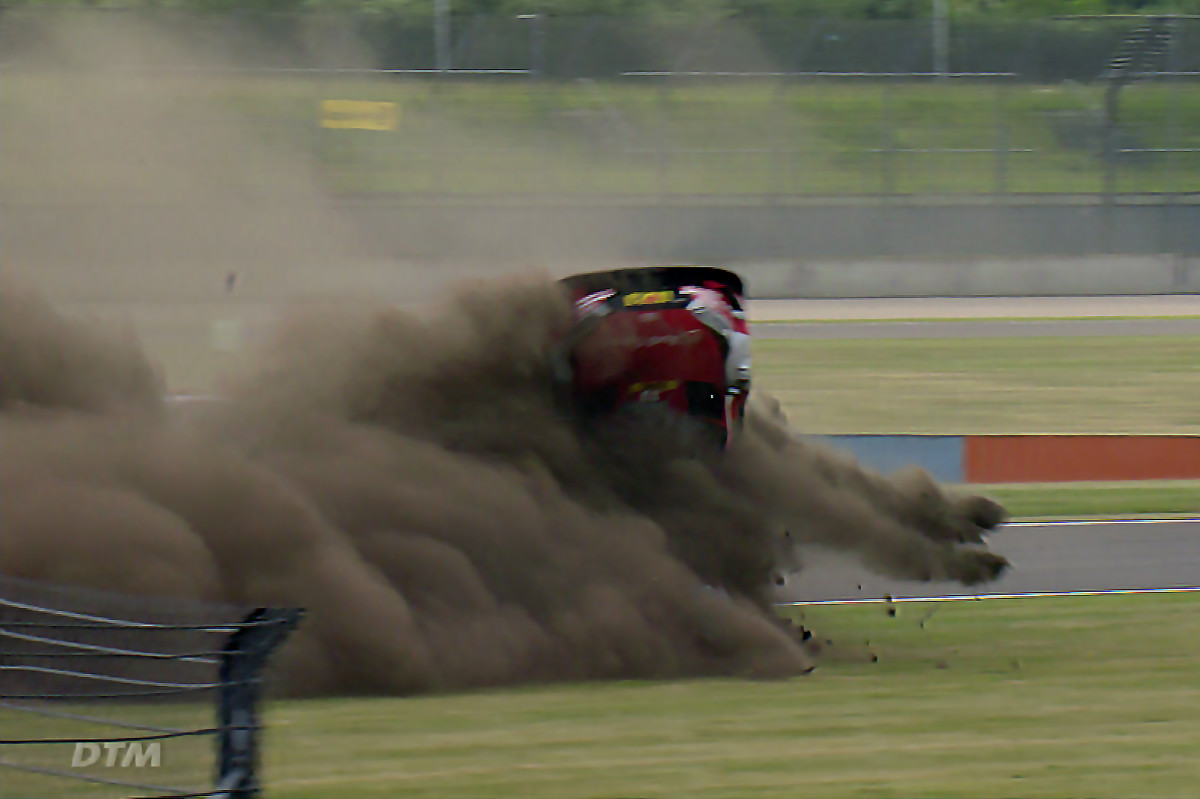 The car took off in the crash, although Rast said there was no major impact. 2 / 7
Image 2 of 7 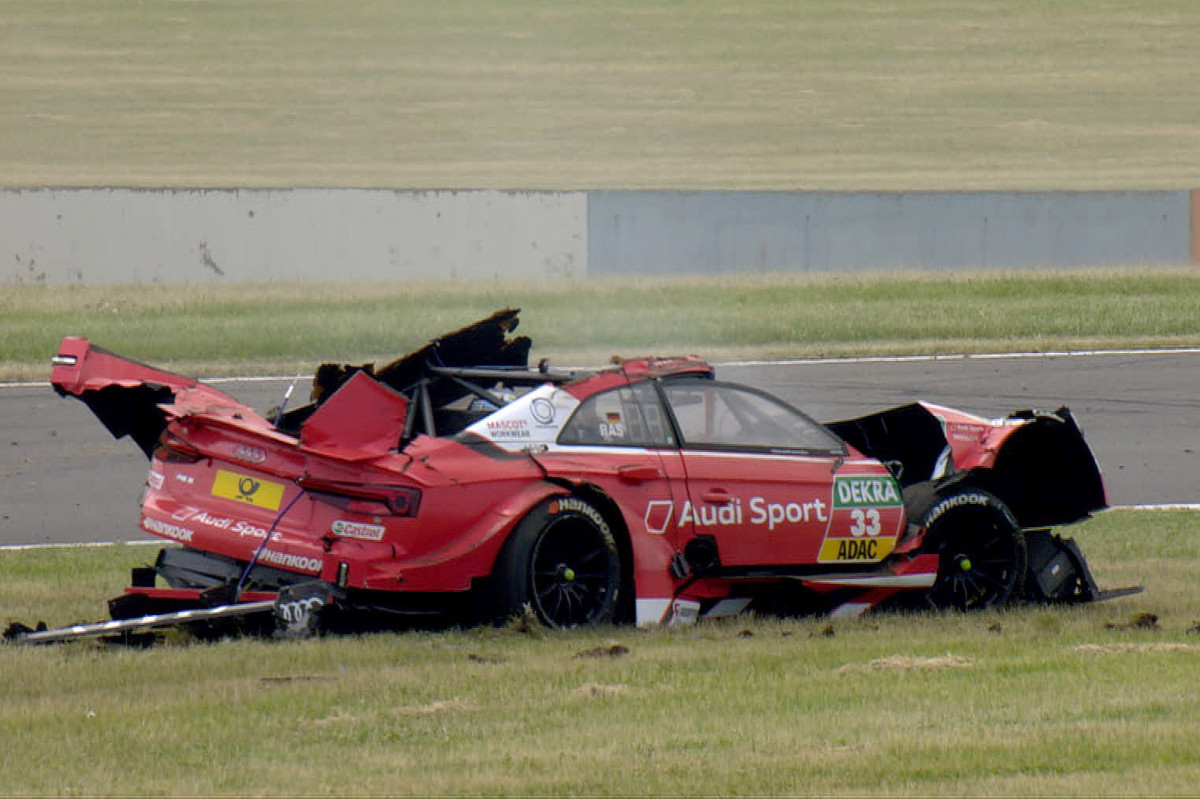 Rast's car was too heavily damaged to be repaired for Sunday's race. 3 / 7
Image 3 of 7 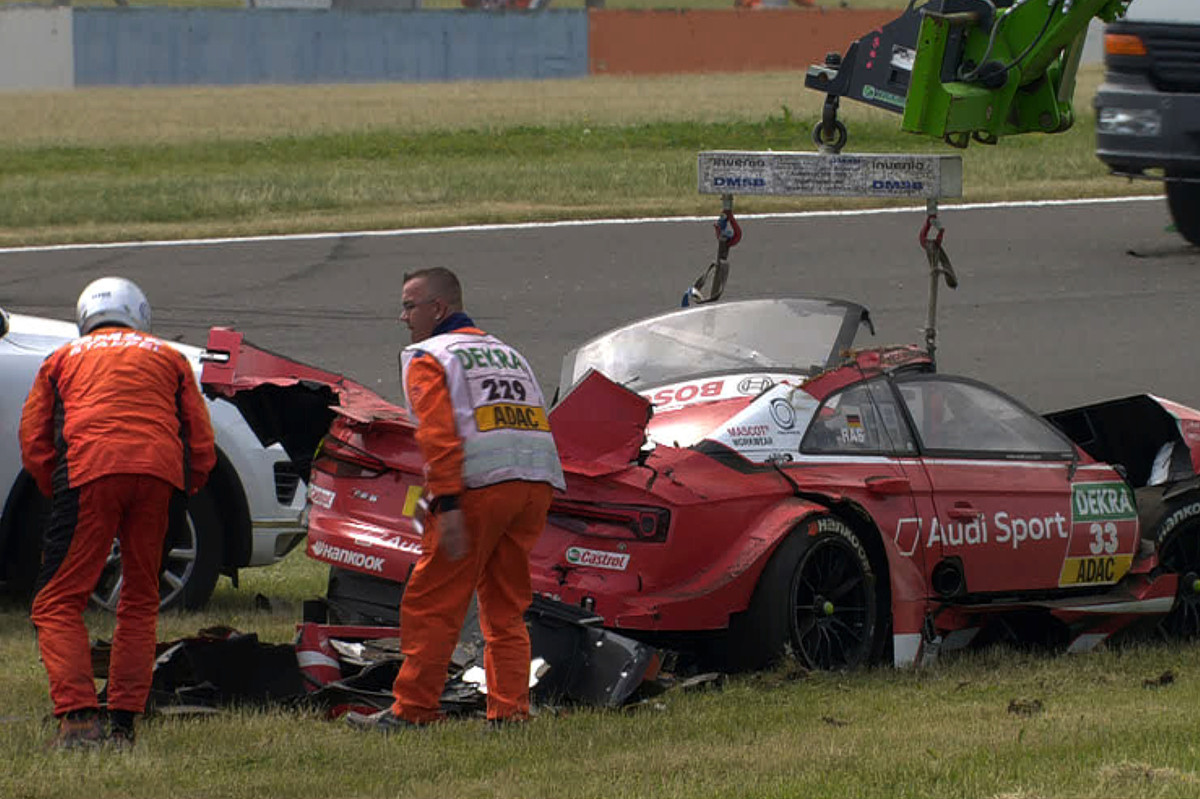 Marshals inspect the damage sustained in the accident. 4 / 7
Image 4 of 7 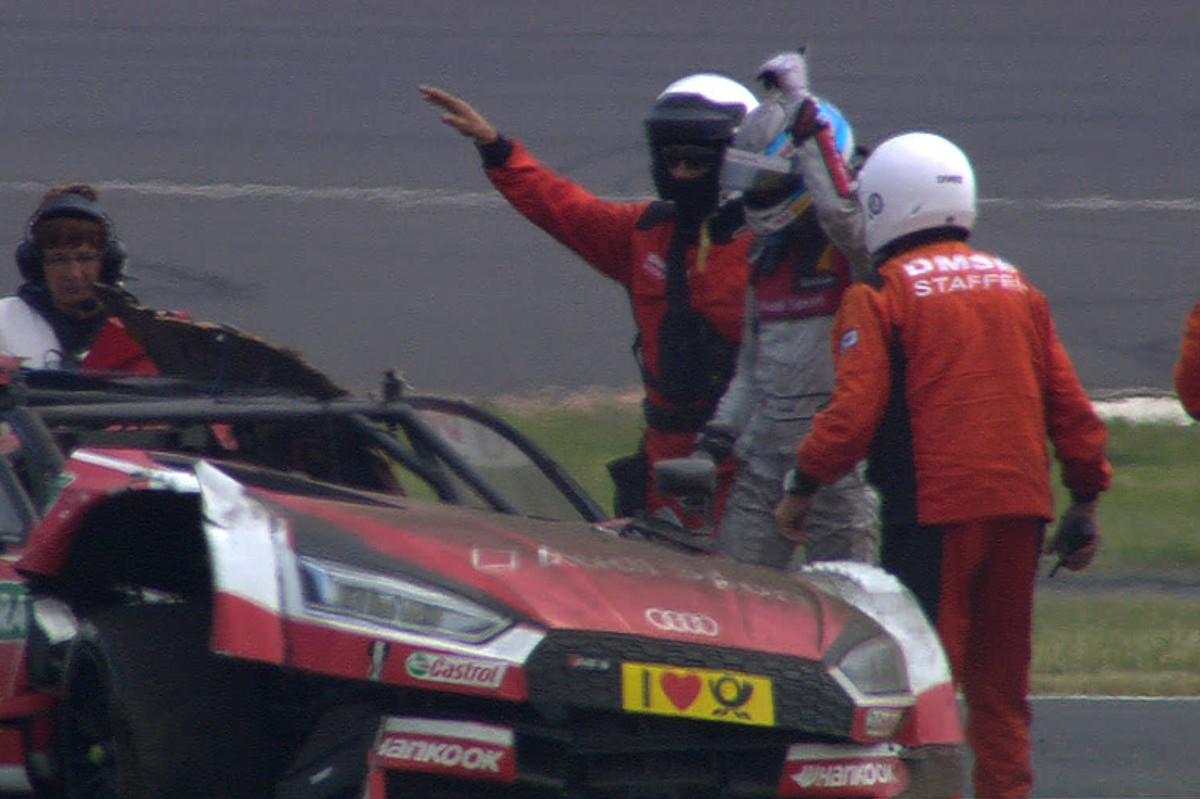 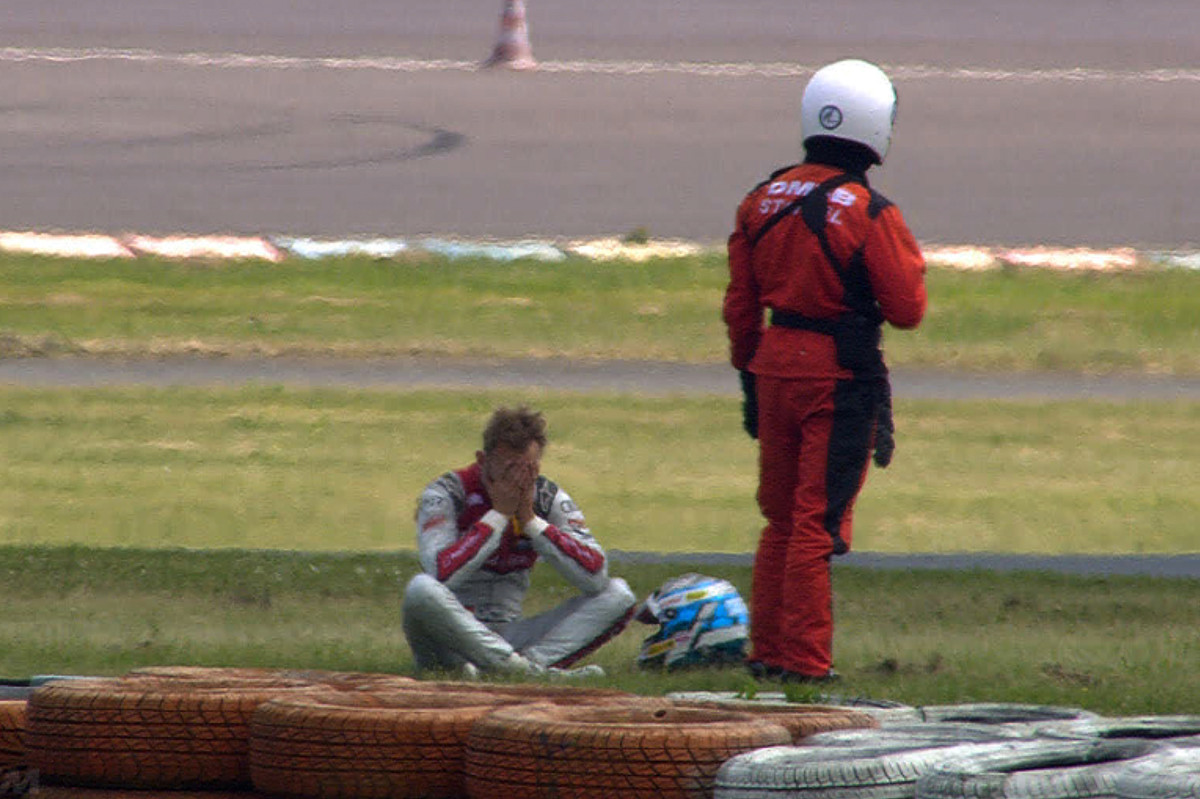 Rast sits down after climbing out of his car without assistance following his huge accident. 6 / 7
Image 6 of 7 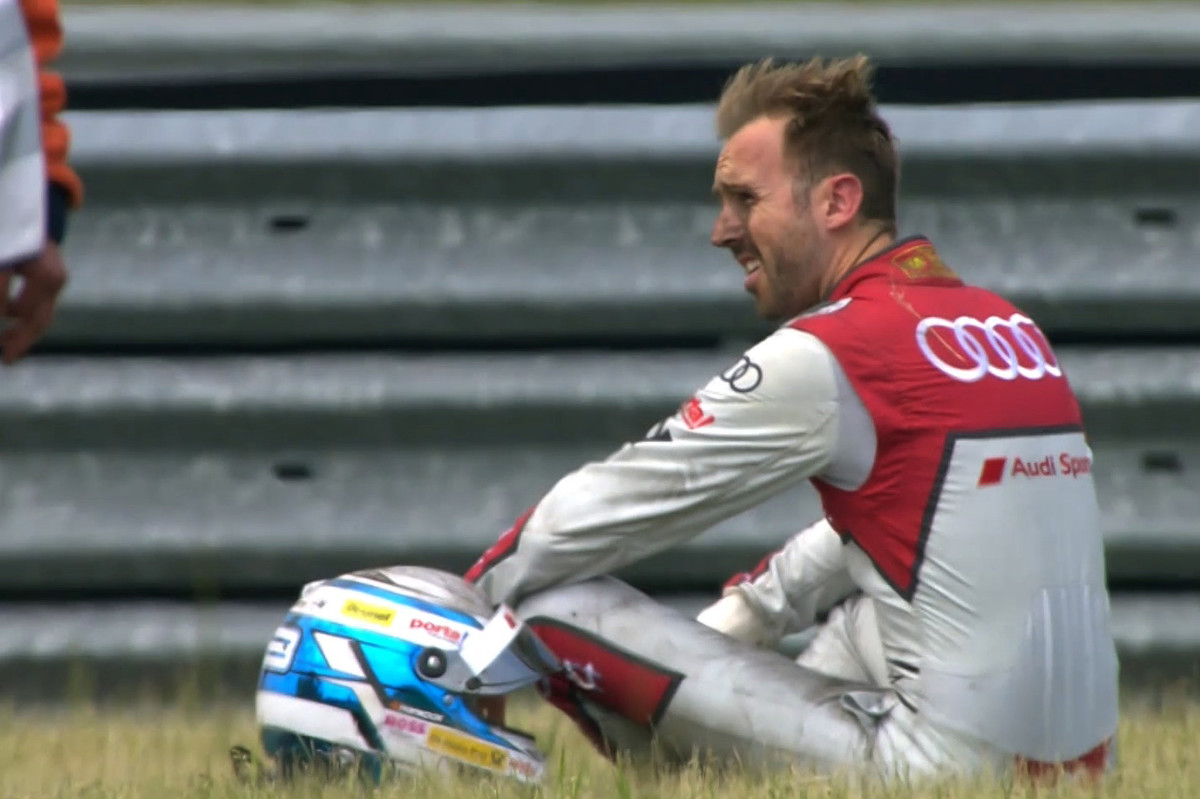 Rast sits down after his huge DTM crash at Lausitz. 7 / 7
Image 7 of 7
Latest

Audi's Rene Rast has described the "dramatic" Lausitzring crash that sent the reigning DTM champion into a barrel roll, and to hospital.

Rast was fighting for position at the back of the pack with fellow Audi driver Loic Duval at Turn 8 when Duval clipped Rast's rear left, spinning him around, and then his RS5 dug into the grass on the outside, rolling the car twice.

It came to rest on its wheels, without a roof or windscreen and with almost every panel deformed.

Rast got out of the car unassisted and walked away, with his face covered in dust.

"I'm very good, I actually have no pain," said Rast, who was taken to a local hospital for checks and an x-ray and later released on Saturday.

"I think the crash looked more harsh than it was.

"It felt quite soft in the car and then the landing was a bit harsh but I had no pain when I jumped out of the car, I knew straightaway I was OK, I gave the thumbs up.

"Obviously it looked quite dramatic, the roof, windscreen, basically everything was gone.

"In the car it didn't feel terrible. I knew I was rolling, I didn't have much time to think about it, so I just did the safety position [arms crossed across chest] and prepared for the stop and then it was all good."

Duval put the incident down to cold tyres on the safety car restart, as he called the touch "not massive", but it was enough.

"We were bunched together and the tyres were cold," said Duval. "When I went on the power for the corner, it snapped, I corrected it but that pushed me wide and I had a small touch with him.

"It was not a massive touch, but due to the track condition, unfortunately it ended up the way we saw it and that was a shame.

"Of course it was nothing intentional. Shit happens and it was bad for mechanics, the amount of workload they had, and for Rene as he missed the race, that's a shame.

"At the end I didn't get a reprimand from anyone, they understand that I just lost the car and that was it."

The Rosberg Audi team was not able to repair the car to race on Sunday in what was a disappointing day for the squad.

Its other driver, Jamie Green, had already destroyed the front of his car as he crashed into the stalled Audi of Nico Muller off the start. Green had been behind Rast, and Muller was unsighted, leaving Green no time to react.

Green's car was turned out ready for Sunday's qualifying where he took 16th and finished the race in sixth. Muller finished 17th and last.