Rast crossed the line three seconds adrift of the winning BMW of outgoing champion Marco Wittmann to claim the crown by just three points from Ekstrom, with Green six adrift and Rockenfeller 12 behind.

DTM rookie Rast always looked the favourite after qualifying his Team Rosberg-run RS5 on the front row, while Ekstrom and Green were mired down the field with grid penalties.

But it was a nervous race for Rast, who was barged aside at Turn 1 after the start by the Mercedes of Lucas Auer, and completed the opening lap in fifth place.

Rast looked to have great speed, and passed Robert Wickens's Mercedes for fourth on the fifth lap.

He then hunted down Auer, passing the Austrian four laps later.

Rast was right on the tail of the leading BMW duo of poleman Tom Blomqvist and Wittmann when Wittmann peeled into the pitlane for his mandatory stop.

Blomqvist pitted three laps later to promote Rast to the lead, and Audi decided to leave all four of its title contenders on the track until deep into the second half of the race.

On fresh rubber, Wittmann was able to take several tenths per lap out of Rast, and the Audi man rejoined a distant net second after his stop. 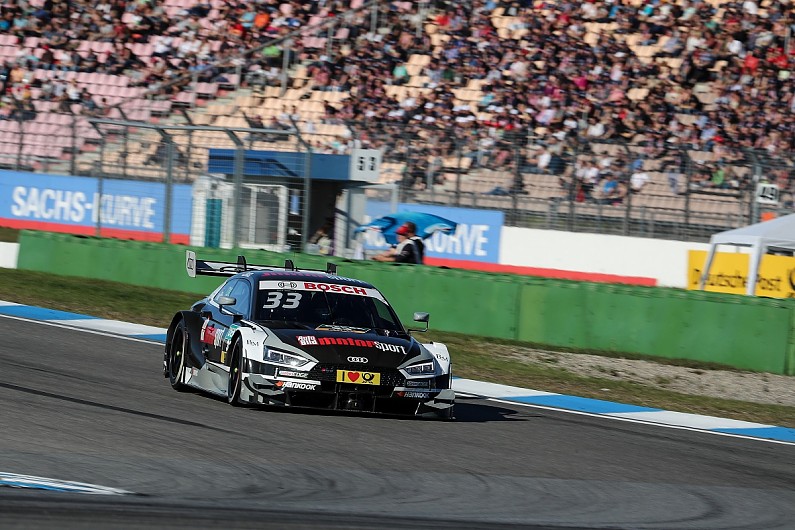 The next nervous moment for Rast came when he tried to pass the ultra-late-stopping BMW of Bruno Spengler at Turn 2 - they made contact here, before Rast surged ahead down the back straight.

Rast carved chunks out of Wittmann's lead, but the title depended on the progress Green and Ekstrom made through the early stoppers on their fresh Hankooks.

Ekstrom had bumped Green's rear end on the opening lap, the Briton plummeting to 18th and last position as he seemed to struggle.

But Green regrouped and passed Ekstrom before the stops.

While Rockenfeller took third from top Mercedes finisher Gary Paffett, Green completed a remarkable recovery to fifth by passing Maxime Martin's BMW on the final lap, but it wasn't enough.

Augusto Farfus (BMW) took seventh from Ekstrom, with the Mercs of Edoardo Mortara and Auer rounding out the points.