Sebastien Loeb has crashed while in a dominant position on the Silk Way Rally, the first competitive outing for Peugeot's latest Dakar contender

Nine-time World Rally champion Loeb, who has yet to win in cross-country rallying, had a lead of just over an hour over team-mate Cyril Despres when the event resumed on Monday after its rest day.

But he crashed heavily just over 50 miles onto the Urumqi-Hami stage in China, causing extensive front end damage to the new-specification Peugeot DKR Maxi when he went into a drain next to a dried river bed and rolled end over end.

Loeb and co-driver Daniel Elena spent an hour and a half effecting makeshift repairs to the front of the Peugeot but stopped again a further 50 miles on to wait for their service truck, which had been delayed in sand dunes earlier on the stage.

Loeb is now returning to the service bivouac, with team manager Bruno Famin saying it was currently unclear whether his rally was over. 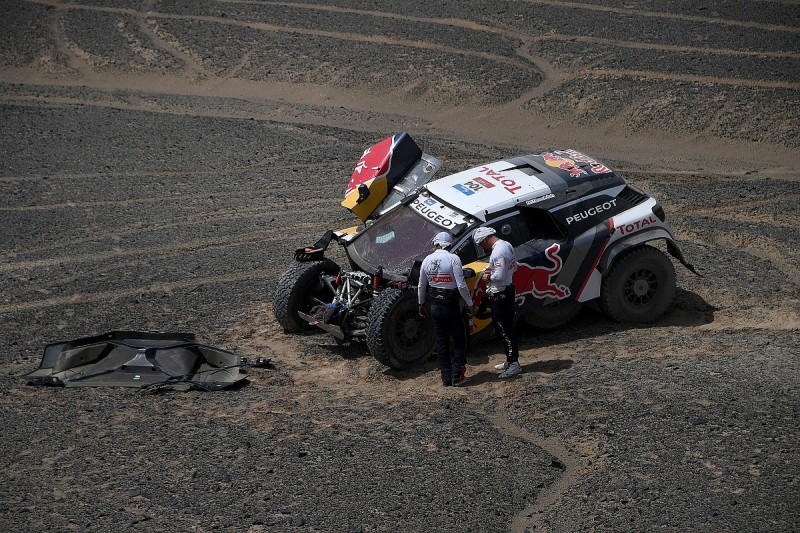 "At the moment, we don't know much about the situation with Seb apart from the fact that he still has a long way to go and that the car is very damaged," said Famin.

"It's only once he's back in the bivouac that we'll be able to carry out a full assessment.

"In any case, what's happened is just part of the competition; exactly the sort of thing that can occur on a rally as challenging as this one."

Loeb was the only one of the three Peugeot drivers on the event using the latest evolution of the car.

The third Peugeot of Dakar legend Stephane Peterhansel is only 11th overall at present, having lost over two hours by rolling on the event's fourth stage last week.