World Rally Championship legend Sebastien Loeb will give the car its competitive debut on next month's Silk Way Rally, while team-mates Stephane Peterhansel and Cyril Despres will drive current specification 3008DKRs on the route from Russia to China (July 7-22).

As the name suggests, the new car is bigger than its predecessor with an extra 20cm of width helping provide more stability. To widen the suspension track by 10cm at each side, Peugeot has new upper and lower wishbones as well as front and rear track rod ends and driveshafts.

Loeb, still chasing a maiden Dakar success, said: "The car is much more stable now that it is wider and so it feels a bit different to drive.

"In the very narrow and technical parts that does mean it's more cumbersome of course, but in terms of stability and driving it's definitely a step forward.

"The car has less of a tendency to roll on its suspension now, so that gives you more confidence to attack and get it sideways.

"I'd say the strongest point of the Peugeot 3008DKR Maxi is the off-road ability that it has. "With its wide track and big wheels, it can go more or less anywhere.

"It's maybe not so agile on stage-type roads: that's more the territory of four-wheel drive cars.

"But the advantage of our car is the fact that it can tackle anything, especially the dunes." 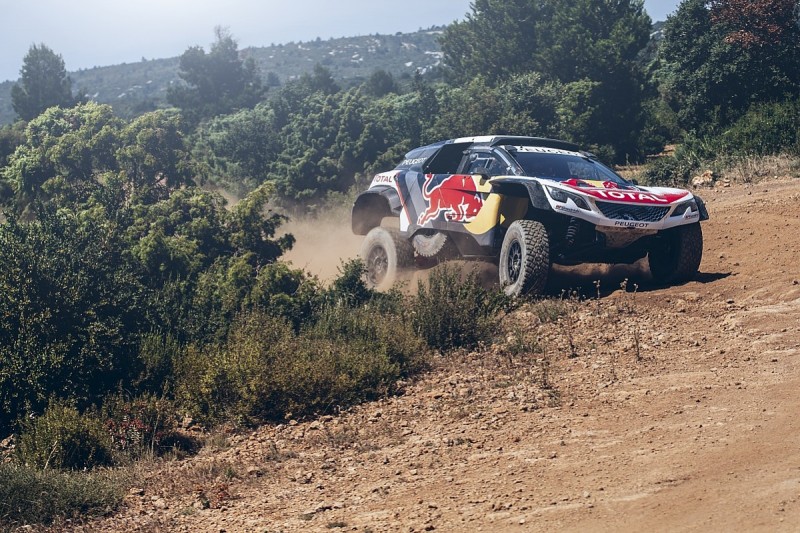 Fellow world champion Sainz added: "After a few years, improving the package always becomes harder, but the work Peugeot Sport's engineers do is great and I obviously try to help as much as possible.

"It's fantastic to see how our engineers try to extract the maximum possible all the time, and how they immediately think of the next steps just as soon as one Dakar has finished."

The final specification of the 3008DKR Maxi has yet to be confirmed for Dakar and Peugeot Sport director Bruno Famin says the Silk Way Rally will be crucial in that process.

Famin said: "Sebastien Loeb will be the driver giving our Peugeot 3008DKR Maxi its competitive debut on the Silk Way Rally after a number of test sessions that have been carried out already by all the drivers.

"The data that will now be collected in real competition will help us define the definitive specification for next year's Dakar.

"As soon as we crossed the finish ramp of the Dakar in January, we started to work on the next generation of car to take on this monumental challenge.

"Of course, there's only one thing more difficult than winning and that's carrying on winning, against very strong opposition."