Stephane Peterhansel has secured a record-extending 14th Dakar Rally title after winning the 2021 edition of the event in Saudi Arabia, as Carlos Sainz won the final stage

Peterhansel grabbed the lead after the second of the 12 stages and never surrendered it thereafter, eventually claiming victory by 14m51s from the factory Toyota of Nasser Al-Attiyah.

The X-raid Mini driver won only a single stage in the entire rally-raid - the ninth test around Neom - his lowest tally since 2015, when he drew a blank on Peugeot's return to the category.

However, he showed remarkable consistency throughout the event, finishing outside the top three in only one stage and never losing more than five minutes to his main opponents.

Starting the shortened final day 15m31s clear of Al-Attiyah, Peterhansel finished third behind stage winner Sainz and Al-Attiyah, doing more than enough to add an eighth cars title to his list of achievements.

In the final stage between Yanbu and Jeddah, Sainz beat Al-Attiyah by 2m13s, with Peterhansel finishing another 40s adrift in third.

Peterhansel's triumph comes exactly 30 years after Frenchman's first success in Dakar, when he won for Yamaha in the motorbikes class.

His chief rival Al-Attiyah won five stages (plus the Prologue), the most of any driver in 2021, but was always on the back foot after ceding 12 minutes in the opening special.

The Qatari driver managed to bring the gap down to under six minutes by Stage 8, but navigational difficulties and three punctures on the following day meant that he had to settle for second. 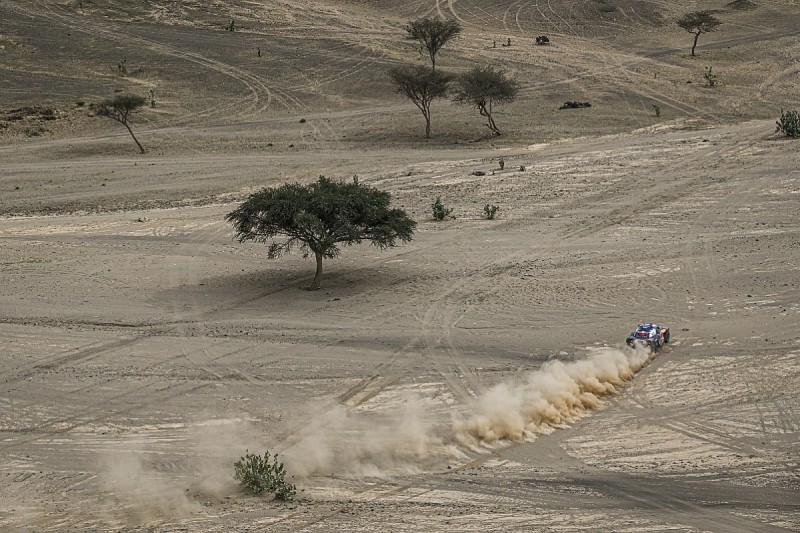 This was Al-Attiyah's second defeat to a Mini driver in as many years, having lost out to Sainz in 2020, and the three-time winner voiced his frustration against British manufacturer's advantage once again, saying the rules are "too much in favour" of the buggies.

Reigning champion Sainz was left as an outside contender after a series of issues in the opening week, and was relying on misfortune to strike Peterhansel and Al-Attiyah.

But with Peterhansel enjoying a trouble-free run and Sainz himself losing 22 minutes in Stage 9 with a broken brake pipe, the Spaniard ended up an hour down on the leaders at the finish in the second of the Mini buggies, before winning the final stage.

Jakub Przygonski won the best of the rest battle for the Overdrive Toyota team, equalling a career-best fourth place result, while the new Prodrive-run Bahrain Raid Xtreme team finished fifth on its debut with 2014 winner Nani Roma behind the wheel of its BRX1 buggy.

However, BRX's star signing Sebastien Loeb failed to make it to the finish, retiring in Stage 8 after being hit by mechanical troubles and punctures on consecutive days.

Vladimir Vasilyev was classified sixth as the top driver of X-raid's suite of Mini 4x4s, beating the PH Sport Peugeot of Khalid Al Qassimi by just under three minutes.

Factory Toyota driver Giniel de Villiers made it three Hiluxes in the top 10 after finishing eighth, ahead of Ford privateer Martin Prokop and the second PH Sport entry of Cyril Despres.

Yazeed Al Rajhi, who won two stages this year, was eventually classified down in 16th, not helped by an engine failure on the final day of the event.

Despite strong individual stage showings from the Century marque, none of their cars made it inside the top 20 in the overall standings.