Two-time Dakar Rally winner Nasser Al-Attiyah set the pace on the opening stage of the 2017 edition, before his Toyota caught fire on the road section

The event officially opened with a looping run from Paraguay capital Asuncion to Argentinian city Resistencia on Monday.

Of the 282 miles making up the path between the two locations, the timed section was just 24 miles early on and was located entirely in Paraguay as the country's only special stage of the event.

Al-Attiyah set the pace in the car section, completing the timed section in 25m41s.

But an oil leak then caused a fire on the left front corner of his Toyota Hilux and he had to be towed by his Gazoo South Africa team-mate Giniel de Villiers.

Closest to Al-Attiyah through the timed section was ex-World Rally Championship driver Xevi Pons, the Spaniard finishing 24 seconds adrift in his Ford Ranger.

Nani Roma, who, like Al-Attiyah, has switched from X-raid Mini to Toyota ahead of this year's rally, was a close third. 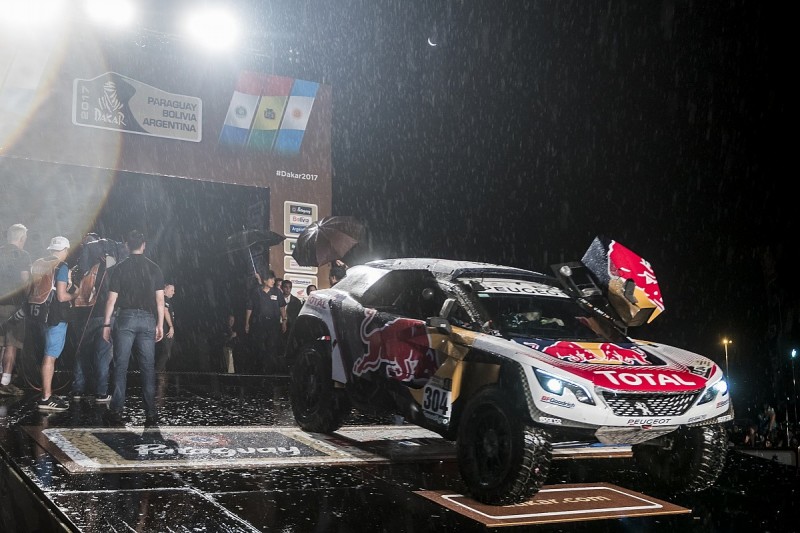 Peugeot's other two works entrants - Cyril Despres and 2016 winner Stephane Peterhansel, who opened the stage - were eighth and 12th respectively.

Yazeed Al-Rajhi was the quickest X-raid Mini driver in seventh, 1m06s off Al-Attiyah and 14s ahead of team-mate Mikko Hirvonen in ninth.

LEADING POSITIONS AFTER STAGE ONE: