Nasser Al-Attiyah has held off Audi’s power boost to win his second stage of the 2023 Dakar Rally and extend his overall lead to more than 22 minutes.

The Toyota driver was furious at a Balance of Performance tweak which gave cars in the T1.U class using renewable energies – effectively main rivals Audi – an additional 8kW which equates to 11bhp ahead of Thursday’s stage, stating it would ‘kill the race early’.

But on the 373km sand and dune covered stage, the second loop around Ha’il, the defending Dakar Rally champion saw off attacks from Audi duo Stephane Peterhansel and Carlos Sainz Sr to take the stage win by 1m57s from Sainz.

After a fierce contest for the lead early on, Peterhansel headed the early running but Al-Attiyah attacked at the midway point and was ahead at the 234km checkpoint.

From there Al-Attiyah edged out his advantage to defend his lead to the finish from Sainz and Peterhansel, but the fight at the front lost Sebastien Loeb around 18km from the end of the stage when the Bahrain Raid Xtreme driver rolled his car, which cost him over a quarter of an hour while trying to get going again.

Al-Attiyah duly clinched the stage victory ahead of Audi pair Sainz and Peterhansel, with Overdrive’s Yazeed Al-Rajhi unable to keep the pace at the front in fourth, close to nine minutes further back.

With Attiyah extending his overall lead to 22m36s, it saw Peterhansel move up to second place and over four minutes ahead of Al-Rajhi. The Saudi Arabian driver will now be looking behind him with Sainz in fourth but less than eight minutes back. 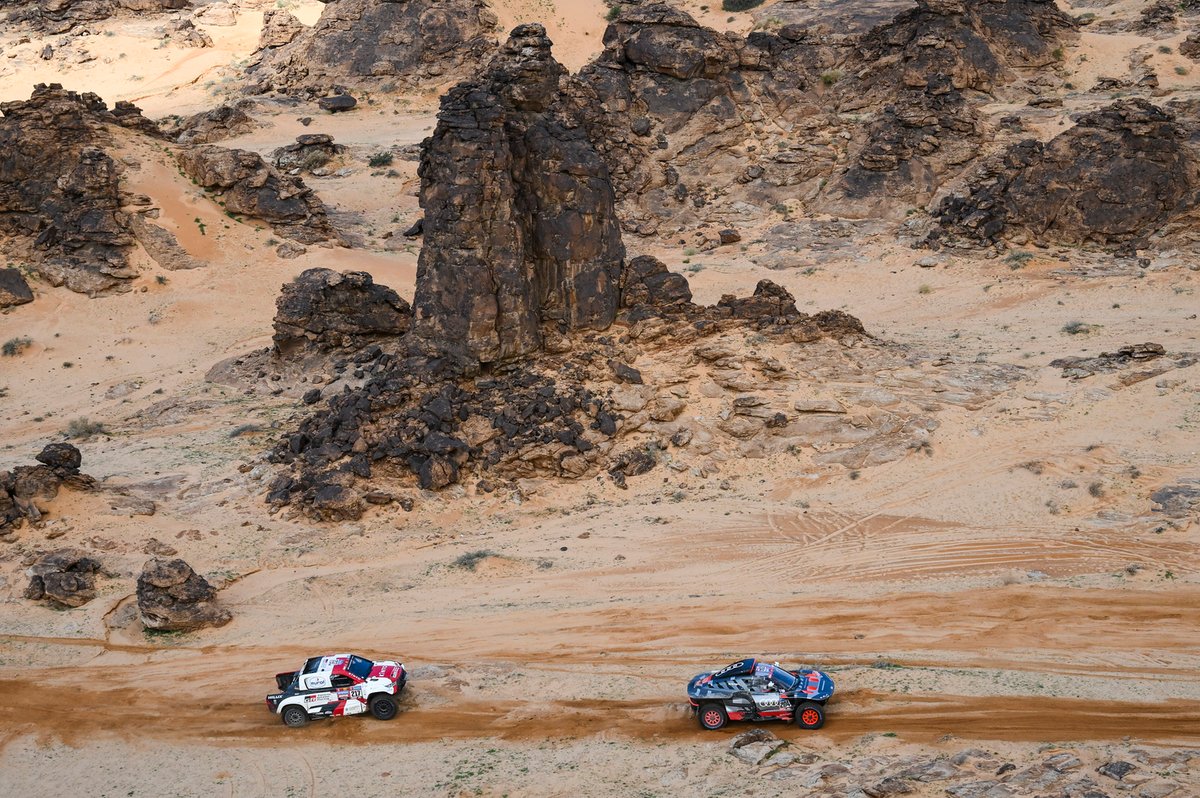 Despite rarely being a contender at the sharp end, Toyota’s Henk Lategan remains in fifth place overall, having finished the fifth stage in the same position, but is close to an hour off team-mate and leader Al-Attiyah in the general classification.

Rookie car driver Lucas Moraes has also maintained his bright start to the event by keeping hold of sixth place for Overdrive by pulling out over three minutes on Toyota’s Giniel de Villiers who remains in seventh place.

Mattias Ekstrom has kept hold of eighth place in the third Audi entry despite losing over 45 minutes on the stage, while Martin Prokop also endured a tough stage losing time but stays in ninth overall.

Two-time Le Mans 24 Hours winner Romain Dumas has popped into 10th for Rebellion as Overdrive’s Erik van Loon suffered a technical problem 138km into the stage and duly lost a chunk of time.

Loeb’s showings of pace have been undone by punctures and reliability woes, leaving him still 1hr53m41s off the outright lead and outside of the top 10.