The former World Rally Championship driver was within striking distance of the lead four days in, before navigation woes cost him around 40 minutes during Friday's shortened Tupiza-Oruro test.

Now fifth overall and well adrift of the all-Peugeot top three and fourth-placed Toyota driver Nani Roma, Hirvonen says he would need those ahead of him to encounter similar issues.

After Saturday's sixth stage was washed out and Sunday's scheduled rest day, Hirvonen will start Monday 42 minutes and 21 seconds behind the lead Peugeot of Stephane Peterhansel, who is 1m09s clear of team-mate Sebastien Loeb.

"It's 40 minutes, so [just] by driving there's no way we can catch it," Hirvonen told Autosport's sister site Motorsport.com.

"But, you know, if the same thing happens to them [like] what happened to us, then you never know.

"We're just going to go flat out, see if they have a problem - but that's the only chance, otherwise we'd just be cruising to the end."

Hirvonen said he had been very happy with his second Dakar Rally prior to the navigation mishap.

"And especially the stages we did with all the technical stuff - even though we don't have the top speed, I know that on the technical areas we can fight with everyone else.

"So I was really happy with how it was going. But, you know, it's part of the race as well, navigation is tricky, and unfortunately we had a bit of an issue.

"Other than that, it was really going well." 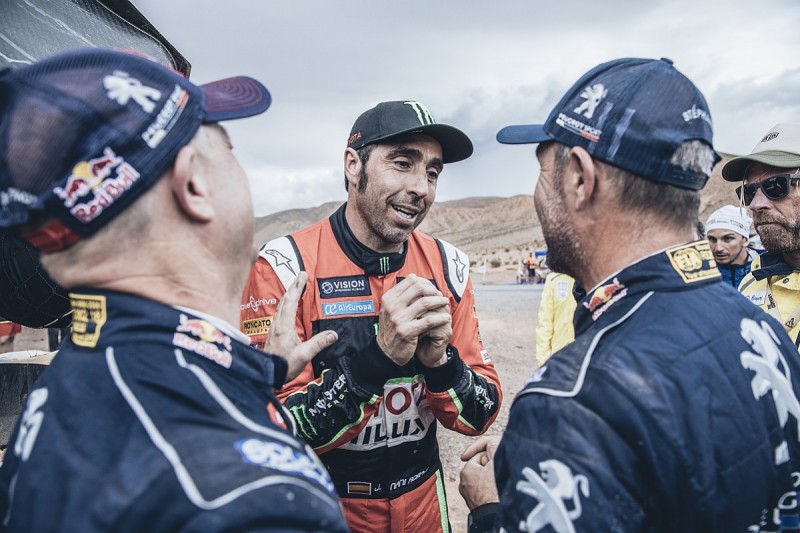 Roma is significantly closer to the Peugeots than Hirvonen, only 5m35s behind Peterhansel, but does not expect to be able to run with them over the coming days.

The rally will remain in the high-altitude Bolivia on Monday and Tuesday, conditions Roma feels do not favour his Toyota Hilux.

"I realised it was impossible [to beat them] on speed, as Stephane passed me in a flat area," Roma said.

"The race is not finished, it's a long way to Buenos Aires.

"We saw these five days what happened to everybody - and we continue."

Seventh stage of 2017 Dakar Rally halved due to wet weather