Seventh stage of 2017 Dakar Rally halved due to wet weather

Monday's test, dubbed a 'marathon stage' due to the fact crews would not be allowed to get any assistance in the Uyuni bivouac, was originally to feature a 200 mile timed run.

But rainfall in Bolivia has made running the stage to plan untenable, and that has been shortened to 100 miles as a result.

The high-altitude Bolivian leg of the 2017 Dakar has been affected greatly by the weather conditions, which forced the shortening of the Tupiza-Oruro test on Friday and then the cancellation of Saturday's Oruro-La Paz timed stage.

After the bivouac in Oruro had been ravaged by torrential rain, competitors travelled on Saturday in a convoy to La Paz, where inclement weather continued through Sunday. 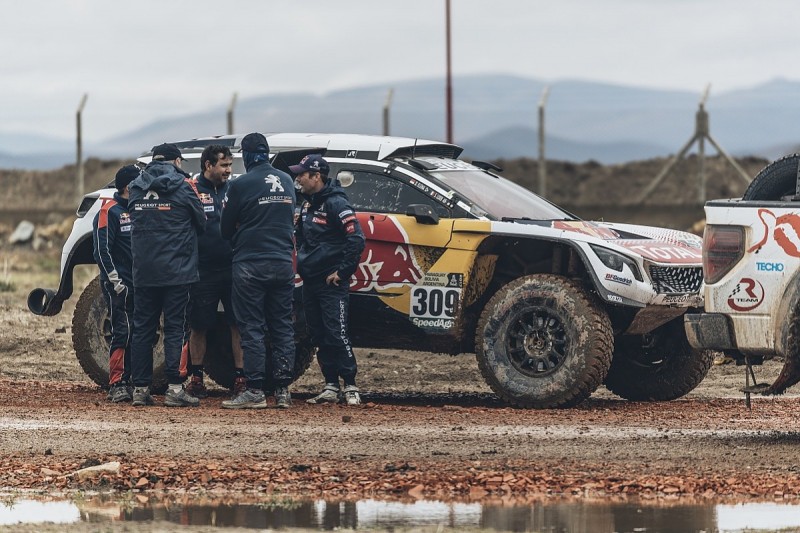 PEUGEOT TRIO TO PLAY IT SAFE

Making up the top three at the midway point of the rally, Peugeot's three remaining contenders have all said they will adopt a cautious approach for the no-assistance marathon stage.

"For sure, we need to manage a little bit different. A marathon stage is always not full attack. We need to be a little bit more safe to save the car," Peterhansel said.

Loeb won the most-recent stage of the rally on Friday, a day after losing 20 minutes due to engine problems.

"We know that it's important not to break everything on the first day because we don't have service at the end," Loeb said.

"It's important to be maybe a bit safe - but for the rest, nothing is different."