Audi Sport has officially revealed the RS Q e-tron challenger in its full guise ahead of the marque's debut in the Dakar Rally next year.

A small group of media, including Autosport, were invited to Audi's motorsport facility 90km from Munich for a sneak peak into the electric-powered prototype, which follows the nomenclature of Audi's SUV range.

The RS Q e-tron is 4.5m long, 2.3m wide and 1.95 high, with the massive intake located on the roof one of the most visibly striking elements on the car.

Two spare tyres are concealed inside the bodywork, with Audi keen to avoid any aerodynamic losses that could impair the efficiency of the powertrain.

The livery of the car is "almost final", according to Audi chiefs, combining greyscale patterns with a fluorescent touch on air intakes, side skirts and the four wheels.

The powertrain at the heart of Audi's Dakar train is extremely complex and harnesses the technology the German marque has developed through its Formula E and DTM programmes. 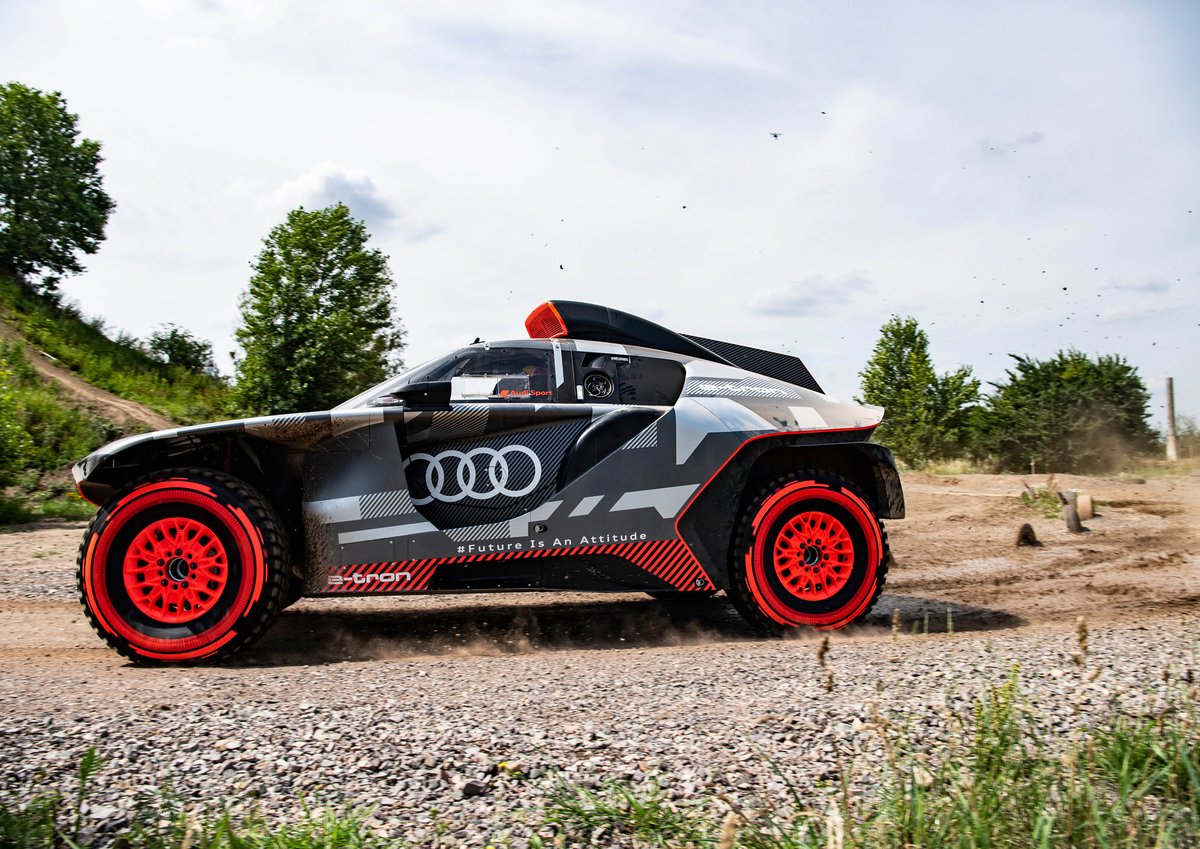 A 295-litre fuel tank is located 1.1m behind the front axle (behind the drivers) and feeds the TFSI 2.0-litre four-cylinder turbo combustion engine that previously powered Audi's Class One cars between 2019-20.

This is connected to the converter (second MGU) which will recharge the battery together with the energy recovery system. A third MGU, which drives the rear axle and is not mechanically connected to the front axle, completes the car's powertrain.

The RS Q-etron also has a small single-gear gearbox on each axle and the differentials are digital, with the aim of saving weight and space, and simplifying an already complex propulsion system.

Carlos Sainz and Lucas Cruz were the first of the project's three driver pairings to get a taste of the prototype that weighs more than two tonnes (the minimum allowed by regulations is 2000 kg) at Audi's test track and were impressed by the weight distribution, which makes the car stable in corners despite its size, without the rolling and pitching characteristic of the 4x2s. 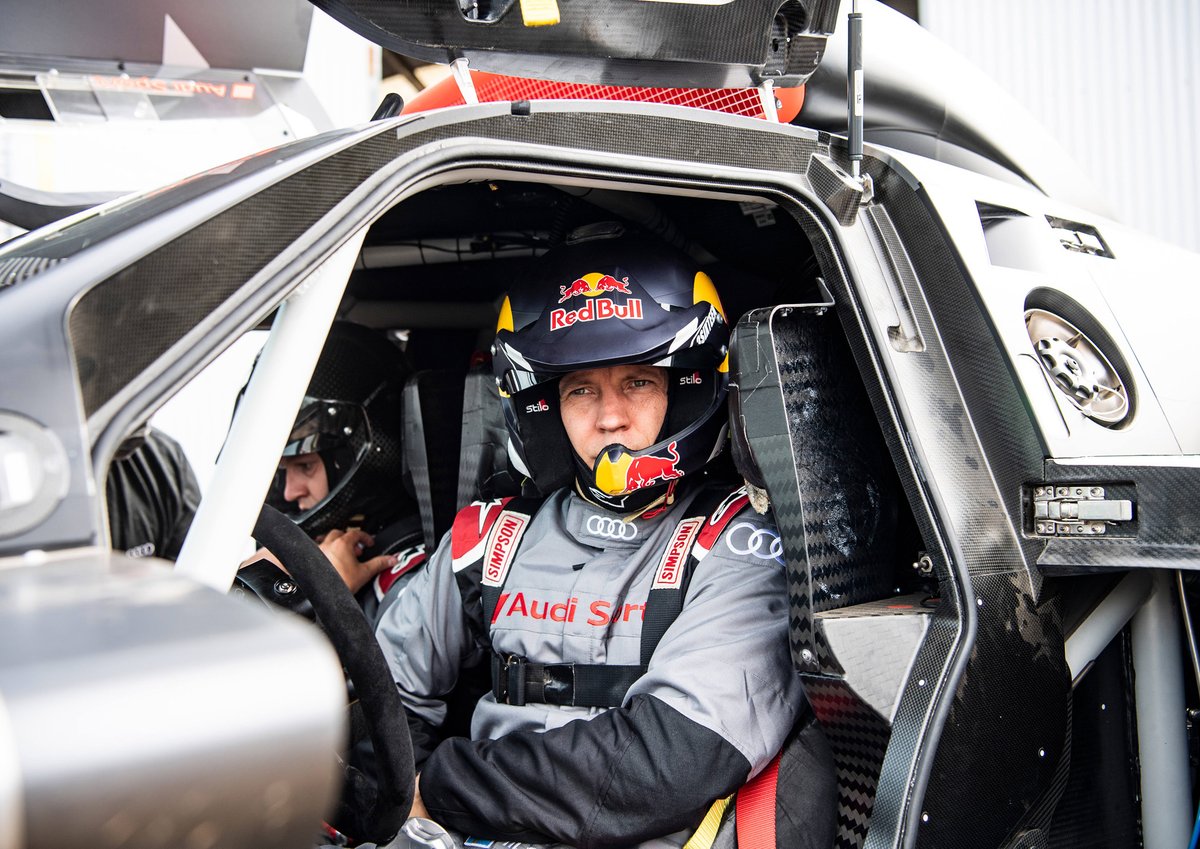 Sainz, Mattias Ekstrom and Stephane Peterhansel then completed seven days of testing at the Area 39 off-road facility - owned by former German rally driver Armin Schwarz - in sand, dirt and even rain for a total of around 200km.

As with any newborn project, there were minor complications and the three drivers offered many details that can be improved between now and January 2022. But the initial impressions of Sainz, Ekstrom and Peterhansel were "quite positive", according to project leader Andreas Roos.

"Our drivers were very happy from the very first minutes in the car, although of course we already have a long to-do list," said Roos. "But we are looking forward to this enormous challenge; we don't just want to be there, we want to achieve the best possible performance.

"Of course, we are aware that there will be a learning curve with this simply enormous and unique piece of technology and art. It is the most complex racing car we have ever built, more so than the LMP1, and with it we want to follow in the footsteps of the legendary Audi Quattro in rally racing."

According to several Audi Sport executives, the three biggest challenges the marque is facing are getting as close to minimum weight as possible, reliability and software.

The latter is vital in a prototype with state-of-the-art technology and more than four kilometres of wiring inside. The interplay between all the energy recovery, energy storage and propulsion systems must be near-perfect in the extreme conditions of Dakar.

Knowing this, Audi employed 22 engineers and no less than 10 mechanics to fine-tune the RS Q e-tron during its first full test in Germany.

In fact, for the first time in the world of cross country, Audi used live telemetry to analyse each and every aspect of the vehicle's behaviour, as well as the safety of its high voltage systems (12, 48 and 800V).

Audi's plan is to get as many test kilometres under its belts as possible, with the next scheduled in Aragon, Spain.

In addition, it hopes to have the second unit of the hybrid 4x4 built during the month of August. The launch will depend on how the next few months pan out, but the project managers hope to do "one or two races" before taking the start line of the Dakar Prologue on January 1st 2022.

"If we don't have any big problems in these first few months, we would have done something completely unique and incredible," said Sven Quandt, head of the Q Motorsport outfit that Audi has partnered with for its foray into Dakar.

"The objective is to finish this first Dakar, everything else will be a gift. But I think we can have some surprises."

The RS Q-etron can also be recharged with a plug  - in addition to the combustion engine and the converter MGU - and Audi is working with Amaury Sport Organisation (organiser of the Dakar) to find the most sustainable way of charging the car between the stages.