Starting fourth in the 342km loop between Neom and Alula, Al-Rajhi snatched the lead from fellow Saudi Arabian driver Yasir Seaidan at the second waypoint and never looked back, claiming a second stage win of 2021.

With Al-Rajhi out of reach, Al-Attiyah and Peterhansel were locked in a tight scrap for the best of the rest honours, with the X-raid Mini driver holding the initial advantage.

But Toyota's Al-Attiyah was able to overturn his advantage by the eighth waypoint, eventually securing second place by a slender margin of 49s.

Reigning champion Carlos Sainz dropped as low as 17th in the early part of the stage, losing over six minutes to the leaders, but recovered enough to finish fourth, 4m12s down on Al-Rajhi.

Jakub Przygonski rounded off a strong day for the Overdrive team in fifth, beating the factory Toyota of Giniel de Villiers by just over a minute. 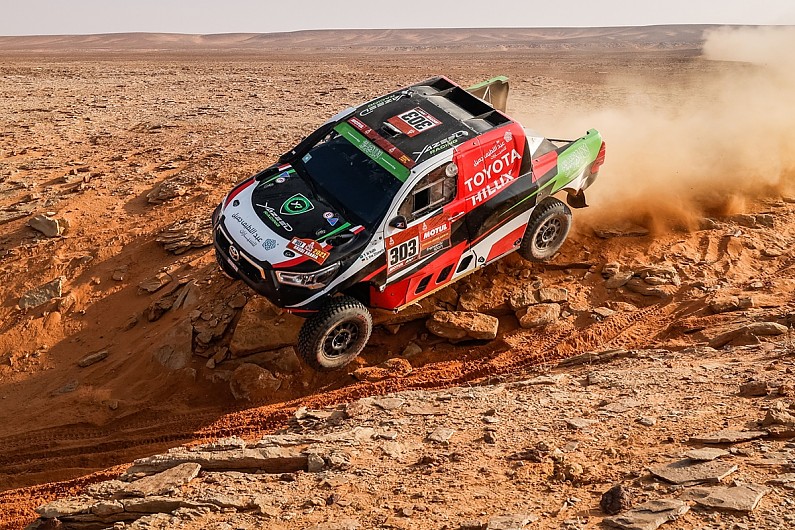 Vladimir Vasilyev was seventh on a Mini 4x4, ahead of the Century cars of Mathieu Serradori and Brian Baragwanath. Nani Roma completed the top 10 on the sole remaining Bahrain Raid Xtreme entry.

Seaidan, who led the rally at the first checkpoint, was forced to stop at the 190km mark and is yet to complete the stage.

With just two stages to run, Peterhansel is edging closer to a record 14th title, holding an advantage of 17 minutes over Al-Attiyah, with Sainz more than an hour down in third.

Przygonski and Roma have consolidated fourth and fifth position respectively, ahead of the top PH Sport Peugeot of ex-WRC driver Khalid Al Qassimi, who finished 15th in Wednesday's stage.

Vasilyev just sits one minute behind Al Qassimi in seventh, while de Villiers has jumped the privateer Ford of Martin Prokop to move up to eighth, with Optimus driver Christian Lavieille remaining 10th.