The organisers of the Dakar Rally have taken measures to crack down on illegal navigational aids and practices ahead of the 2020 edition of the marathon.

The initiative, spearheaded by new rally director David Castera, comes as a result of continued suspicions that teams have been able to circumvent the regulations in the last few editions of the marathon through the use of various tools.

Autosport has learned that, in a hitherto unprecedented measure, the top 25 cars in the first Saudi Arabia-based edition of the event will have two video cameras installed in their cockpits.

The cameras will record each stage to monitor whether any competitors are using prohibited electronic devices or other ways of easing the navigational challenge.

Teams are specifically forbidden from using radio transmitters and receivers, satellite links and data transmission systems unless they have been provided by the organiser or otherwise specifically authorised.

The cameras for monitoring will be powered by the car's batteries and have been tested by Castera and his team in the last few months.

Also, article 28P1.3 of the regulations for the Cars/Trucks/SxS classes now mandates that the 10 leading crews "must hand in their mobile phones" to be placed in a box, which will be sealed by a marshal at the start of the day's running and can only be unsealed upon arrival to the end of the stage.

"We have worked much more at controlling all the information that we give from Dakar about the route," Castera explained to Autosport.

"We try to keep more things inside [event organiser] ASO because otherwise there's always talk as to who has GPS in the car, who has the route map, and so on. We are going to stop all this.

"We'll put cameras inside the cars to verify what they do inside, whether they have GPS, phones, etc. We want to make the race more balanced so that everyone gets an equal chance." 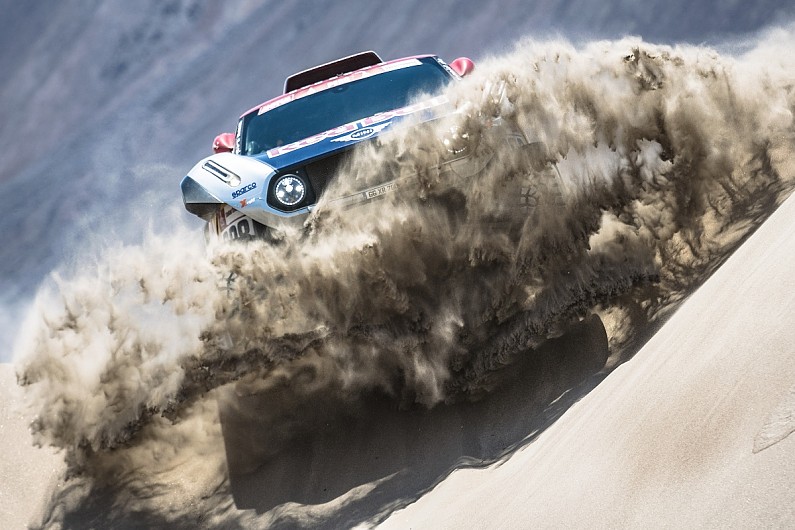 While the roadbook for each given day's stage is traditionally delivered to competitors the afternoon of the day before, article 22P4.5d) of the regulations now specifies that "for some legs, roadbooks may be distributed in the morning at the start of the leg".

This will be the case for "at least four" and potentially as many as six of the marathon's 12 stages, to mitigate the advantage the bigger teams can get from satellite analysis of the route.

During the 2019 event in Peru, organisers had introduced provisions against competitors adding information to the roadbook or carrying additional notes on their machines or articles of clothing.

These rules will remain in place for this year's event. Honda factory rider Kevin Benavides seemingly fell foul of the regulation in last year's event and received a three-hour penalty for carrying additional notes on the bike.

Benavides stipulated that the penalty was "not fair" because the supposed infraction took place before the new rule came into force.

It was ultimately overturned almost two months after the conclusion of the event, with Benavides reinstated in fifth place in the final classification of the marathon.

This year's Dakar Rally will take place on January 5-17.