Toyota Hilux cars finished best of the rest behind the dominant Peugeots in the previous two editions of the Dakar, with Gazoo drivers Nasser Al-Attiyah and Giniel de Villiers making up the podium behind winner Carlos Sainz Sr last year.

Now that Peugeot has withdrawn from cross-country rallying, Hall is convinced his team must seize its chance.

"Last year our goal was also to win, but this year we have to do it," Hall told Autosport.

"We have a good car, good drivers, the same team from last year. It is a positive continuity.

"We had two chances to win [in 2018], but we finished second and third. This year we must achieve it."

Al-Attiyah and de Villiers will again be partnered by third driver Bernhard ten Brinke, who likewise was a frontrunner last year and claimed a stage win.

Toyota will face opposition from the X-raid Mini team - which signed three drivers from Peugeot's works line-up and will also field five of its regular 4x4s - as well as the PH Sport-entered privateer Peugeot of Sebastien Loeb.

"We hope we can do a very good job, we need to give Toyota that first place they have not yet achieved," said 2009 champion de Villiers.

"We have the same pressure as last year with Peugeot, I think we may have a slightly greater chance of winning now that there is no official team, but it will be a tough race. The team that makes fewest mistakes will win."

Al-Attiyah, who won with Volkswagen in 2011 and Mini in 2015, says he is encouraged by the prevalence of sand dunes in the all-Peru 2019 route.

"Last year we had a very good chance of winning, but we had a mechanical problem. Peugeot had four cars and everyone helped each other," he said.

"This year we will try to give Toyota a historic first place in the Dakar. This is the Dakar that I like the most, with 70% of the course in dunes." 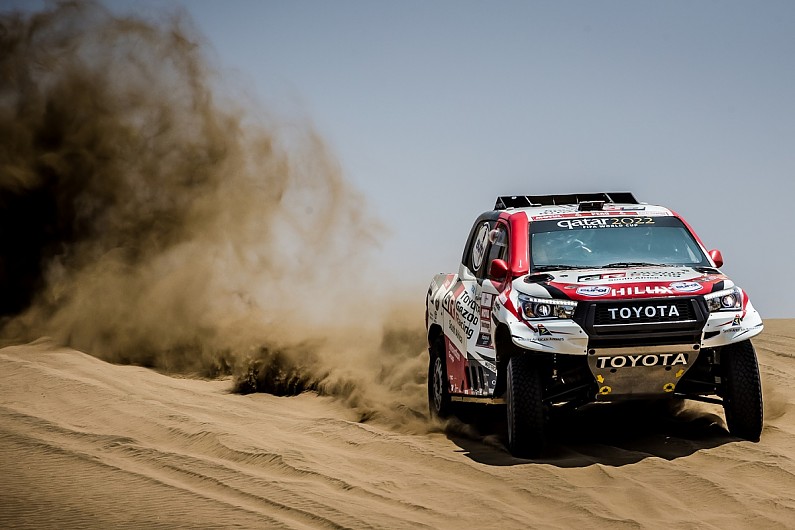 According to Hall, the team made only minor changes to the Hilux that contested the 2018 event.

"The base is the same," he said. "We changed the cooling system because we had too much cooling last year.

"We worked a lot on the suspension and the shock absorbers, we made the car more comfortable for the drivers, because their seat was too high.

"We have an air restrictor [that's] 1mm narrower than in 2018, which implies five percent less power, but we changed the characteristics of the engine slightly."