Morgan prevailed from pole position in a scrappy race that was thrice interrupted by the safety car.

But the Lancastrian faces a visit to the series’ driving-standards officer after locking up and completely missing the chicane with three laps remaining.

The moment bought him a large amount of time over Turkington’s similar BMW 330i M Sport, in this case run by West Surrey Racing, although Morgan said he did immediately back off to try to correct the situation.

“That race was 99% perfect apart from that one mistake I made at the chicane,” said Morgan.

“I was kicking myself, although I did back off. The tyre was absolutely shot, there was nothing left.

“Another couple of laps and I’d have been screwed.”

Thanks largely to the persistent interruptions, the top four positions remained unchanged from the first lap.

Morgan got a good start from the front row, ditto Turkington, who launched ahead of Senna Proctor’s front-row-starting BTC Racing Honda Civic Type R from third on the grid.

Jake Hill emerged from an early scrum with Rory Butcher and Tom Oliphant to establish his Motorbase-run MB Motorsport Ford Focus in fourth, and from then on the leading runners were in close formation when the race was actually green, but without changing places. 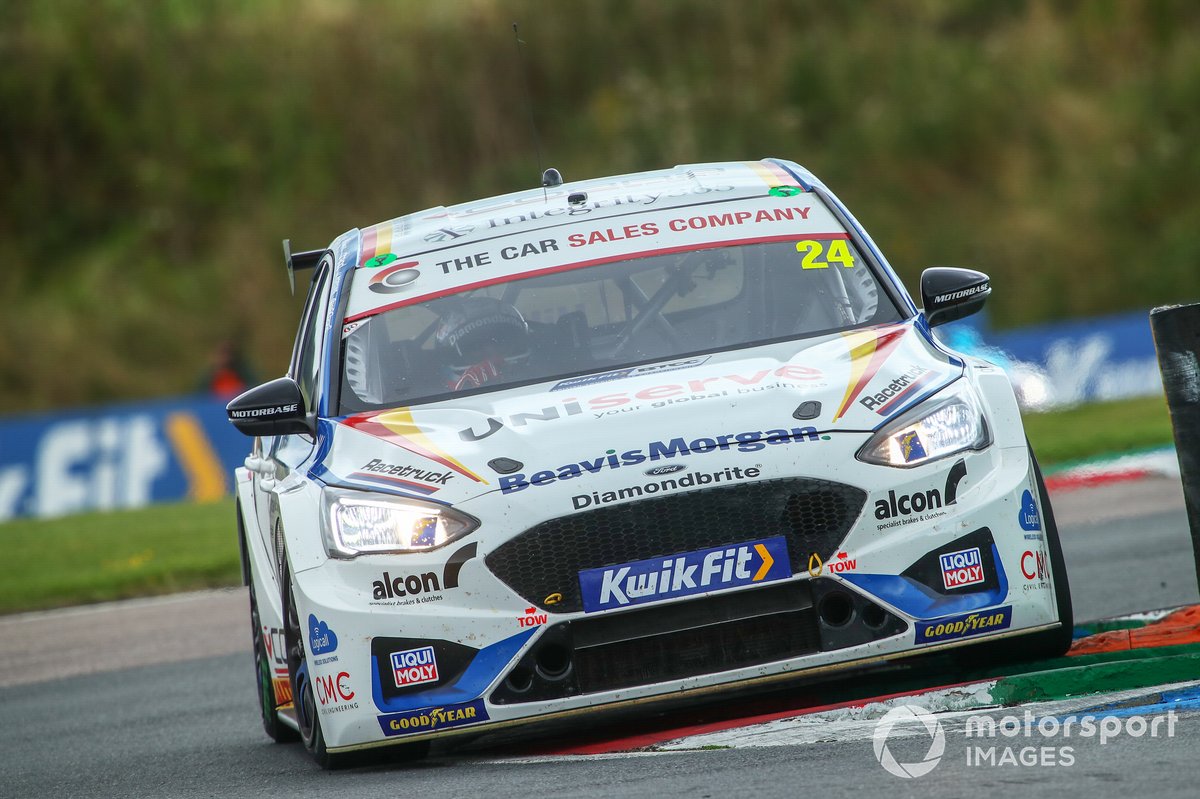 The first safety car came immediately: Gordon Shedden, from the back of the grid, looked as though he was trying to avoid Nic Hamilton to his inside as he bumped into Jade Edwards at Allard.

Edwards’s BTC Honda was smashed into the barriers, while Shedden went in backwards before returning his shortened Dynamics Honda to the pits.

The second pause of the race was triggered by a kerfuffle that ended with Sam Smelt’s Speedworks Toyota in the tyres at the Complex, and Carl Boardley trickling back to the pits to retire his Infiniti.

And the third, very brief, safety car was caused by Ollie Jackson pulling his MB Ford off at the exit of Cobb with deranged right-front suspension.

One driver making progress was Tom Ingram, trying to rescue his day after a second-race puncture in his Excelr8 Motorsport Hyundai i30 N.

Ingram rose from 12th on the grid to nab fifth place on the last lap from Butcher’s Corolla with a move into the Noble kink.

Josh Cook, with a hefty 66kg of success ballast on his BTC Honda, completed his excellent day with seventh, with Jason Plato right behind at the wheel of his Power Maxed Racing Vauxhall Astra.

Sutton, carrying the maximum 75kg of ballast for his win in race two, was eighth in the early stages but was muscled out of that position in a superb move by Ingram at the chicane; the lost momentum as a result of that resulted in contact as he was further demoted by Plato and Smiley.