Two-time British Touring Car champion and 2021 series leader Ash Sutton put in a masterclass for victory in the second race of the day at Thruxton.

Sutton started the race from fifth on the grid, yet moved his Laser Tools Racing Infiniti Q50 to the front with six laps remaining to claim his fourth victory of the season.

Sutton had no advantage from rear-wheel drive off the line at the start, but a sensational move on the first lap resulted in him threading past Rory Butcher around the flat-out Goodwood sweep and then around the outside of Jake Hill into Church Corner.

With 39kg of success ballast on the Infiniti, Sutton was expected to have little trouble disposing of the second-placed West Surrey Racing-run BMW 330i M Sport of Tom Oliphant, who was carrying 57kg from his third place earlier in the day.

So it proved, and Sutton got ahead on the fourth lap, but by the end of that tour he was 2.363 seconds adrift of race-leading polesitter Josh Cook’s BTC Racing Honda Civic Type R.

Cook was laden with the full 75kg ballast from his win in race one, and Sutton began to carve into the gap.

By the end of the ninth lap of 16 the Infiniti was with the Honda, and the next time around Sutton got the run on his good friend Cook out of the chicane and inserted himself into the lead at Allard.

Sutton extended the gap as far as 1.247s, before taking the chequered flag 0.878s in front.

“I could see Josh was having understeer at the exit of the last corner, and I got a run and he always leaves me racing room,” said Sutton.

“Obviously Josh had been working his tyres – the weight meant he was hurting them more.” 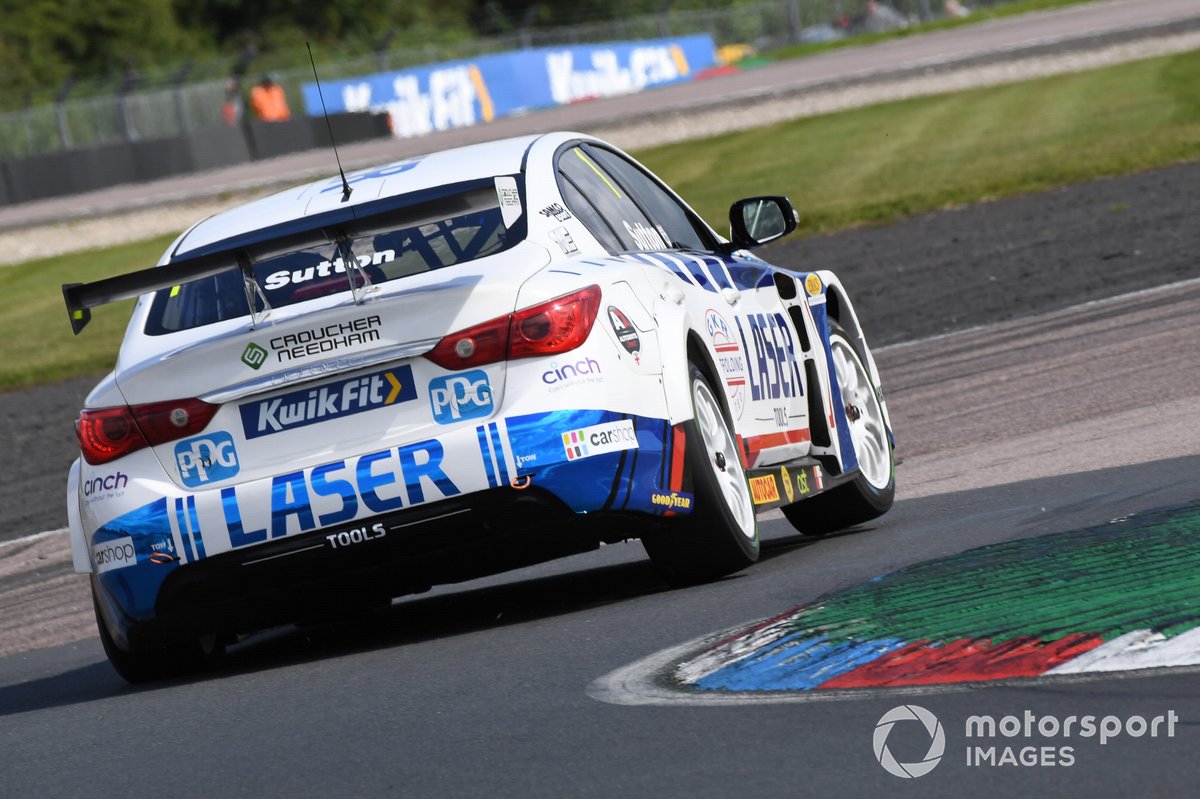 Cook was a comfortable second, while Oliphant also claimed his second podium of the day for third.

Right behind the BMW at the finish was the Motorbase-run MB Motorsport Ford Focus of Jake Hill, carrying 66kg of ballast after its second place earlier in the day.

Hill, in turn, was given plenty of breathing space because of the frantic battle for fifth.

On the 13th lap, Butcher dropped two wheels onto the grass at Noble as Ingram got extremely close, but somehow held onto the slide, defended the position, and the lost momentum allowed the next train of six cars to close up.

Ingram finally made his way past at Segrave on the penultimate lap, and Colin Turkington also got his WSR BMW alongside the Toyota on the run to Noble, only for Butcher to hold on.

Then, on the final lap, a left-rear puncture sent Ingram wide at Church, and he dropped to 12th at the finish.

With Sutton pulling the number 8 in the reversed-grid draw, that means Morgan will start the finale from pole.

The race was a disaster for the Dynamics Hondas: Gordon Shedden retired early with clutch problems, while Dan Rowbottom lost six laps in the pits after suffering from a loss of turbo boost just after the start.