Josh Cook made it two out of two from the British Touring Car Championship’s opening round at Thruxton, and took his collection of BTCC wins at the Hampshire track to six.

As in race one, Cook had to survive contact at the Complex on the opening lap of the restart to race two. Tom Ingram brought his Excelr8 Motorsport Hyundai i30 N side by side with the Honda, which skipped off the kerb and made contact with the Hyundai. There was another brush between the pair in the runoff before they continued.

With Cammish in only for this weekend, it seemed likely that he would play rear gunner to Cook, who now had 75kg of success ballast aboard his Civic.

But Cook was setting good lap times and, although he began to lose a little speed at the Complex as the race wore on, it was never enough to be a worry.

At that point, Cammish was wary of Hill behind, before the Ford in turn began to fade.

“We went quicker than I did in race one [without ballast],” said Cook.

“We made some real changes for the weight and it really helped, and learning that was crucial for us.

“We tried it in testing and it worked, but it was good to replicate that in a race, and I was happy with those sorts of lap times.” 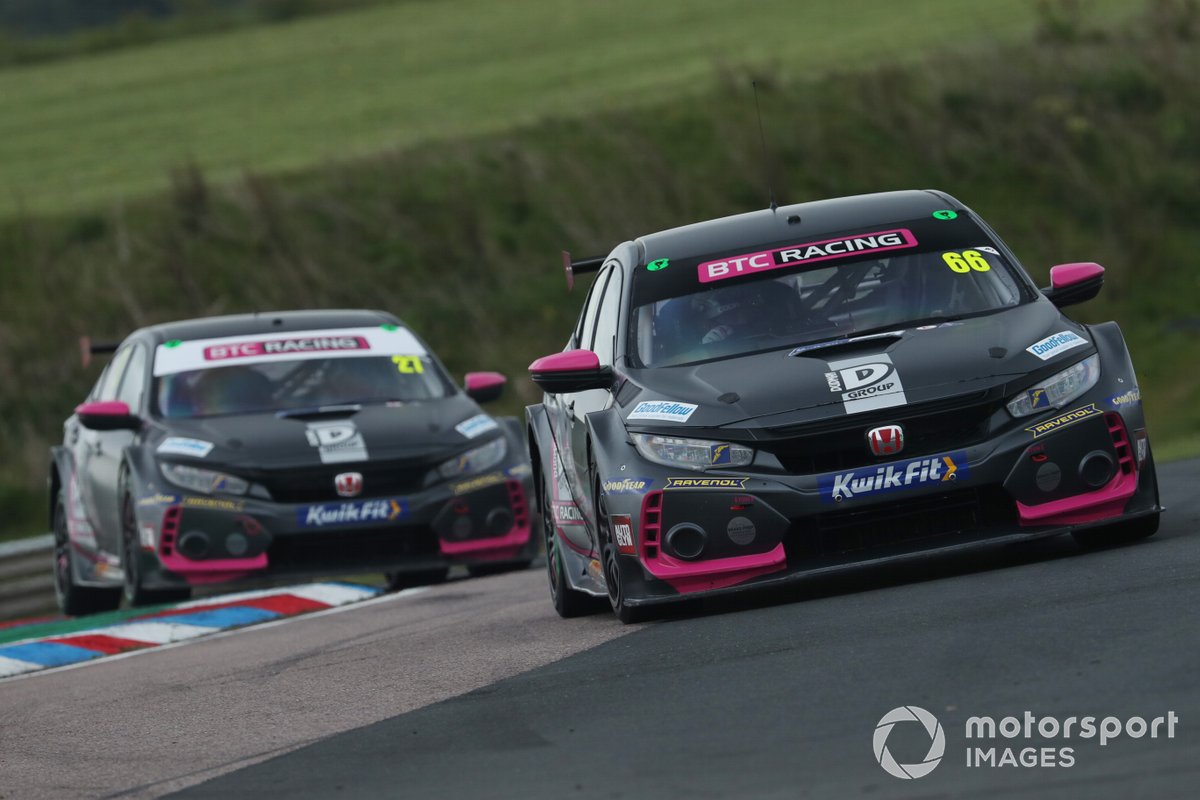 Cammish, in turn, described the race as "formation flying" and that on "any other driver I’d have had a go, but that wasn’t the right thing to do today."

Hill was left to rue a poor start with too much wheelspin that allowed Cammish in front of him in the first place, but was delighted with his second podium of the day.

Jason Plato initially held the position in his Power Maxed Racing Vauxhall Astra, but came under pressure from Rowbottom, who forced the two-time champion into an uncomfortable position on the chicane kerbs with five laps remaining and he accelerated past into Allard.

Ingram faded a little in this race but came home sixth, ahead of the West Surrey Racing BMW 330i M Sport of four-time champion Colin Turkington.

Aiden Moffat led home Laser Tools Racing Infiniti Q50 team-mate Ash Sutton for eighth, but this was a race that necessitated another charging drive from the reigning champion.

An engine issue for Sutton’s Infiniti prompted the team to bring him into the pits under the safety car for a quick fix – he resumed 24th and stormed through to grab ninth from Tom Oliphant’s WSR BMW on the final lap.

Another WSR BMW, that of Stephen Jelley, finished 11th from the back of the grid following transmission failure in the opening race, and he has been drawn on reversed-grid pole.

The race stoppage was caused when Andy Neate’s Motorbase Ford made contact with Glynn Geddie at Allard, turning around the Scot’s Team Hard Cupra. Jade Edwards was stuck on the outside in her BTC Honda and all three smashed into the barriers, Geddie riding along the tyre wall before bouncing upside down and prompting a long delay while the barrier was repaired.

The safety car was called when Rory Butcher crashed his Speedworks Motorsport Toyota Corolla out of third place at Noble when he got caught out trying to run three-abreast with Hill and Ingram on cold tyres.