Derek Palmer Jr, whose 17th-place finish at Thruxton is the best result of the outfit's rookie season, will drive the team's sole Infiniti Q50 in Cheshire this weekend.

Ex-Formula 1 driver Martin Donnelly is working to remain involved with the team, having made his BTCC debut at Thruxton in place of Richard Hawken.

That switch activated the squad's one permitted driver change for the season, a rule brought in alongside the TOCA BTCC Licence for 2014.

The team is talking to other drivers about its second seat though, and AUTOSPORT understands it may be granted permission to field another driver in the Donnelly/Hawken car for the remainder of the year - providing they fill the seat for the Croft round on June 27-28.

Despite the loss of one of the Paras entries, the BTCC grid will return to a 28-car grid for the three races on the Oulton Park Island layout having dropped to 25 at Thruxton.

Qualifying crash duo Simon Belcher and Mike Bushell will both take part after their respective cars were successfully repaired in time.

Proton driver Dan Welch, also sidelined by a pre-race crash at Thruxton, is back too, while Team Parker's rookie Alex Martin will return after successful back surgery.

Belcher travelled to Donington Park on Friday to shake down his repaired Avensis, after it had passed scrutineering at Oulton.

"There was an immense amount of work to do to make the job right. The team's been burning the midnight oil and the car looks as good as new." 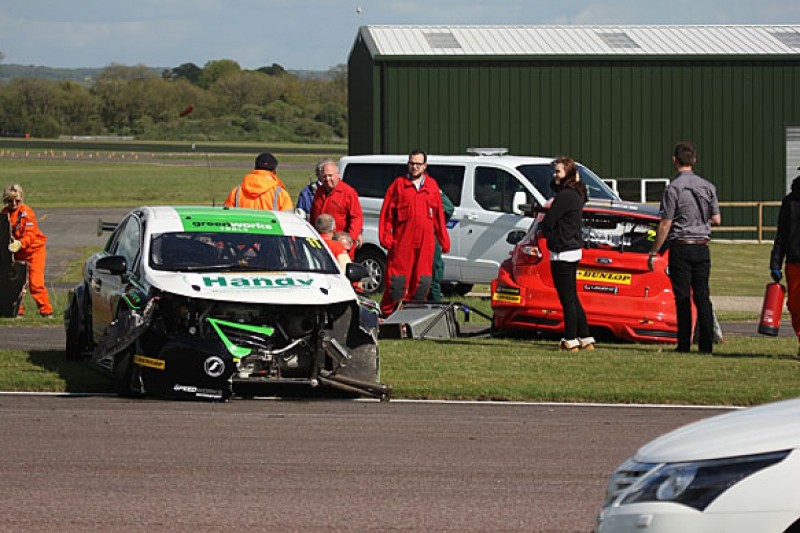