Honda driver Shedden had run second for the majority of the race but inherited the lead on the penultimate lap as Jordan slowed with a suspected electrical issue.

Reversed grid polesitter James Cole retained the lead through the first corner ahead of Jordan, but an attack around the outside from Shedden into the Wilson hairpin bunched the top three up.

Jordan got a better exit off the corner and drove around the outside of Cole at Turn 3 to clinch the lead, with Shedden following him through and Collard getting past Team BMR Subaru driver Cole off the subsequent Agostini right-hander.

With six kilograms less ballast on board than his BMW rival, Shedden led the chasing pack - with he and Collard joined by Turkington after he too cleared Cole - in closing up to Jordan in the first half of the race.

Jordan regrouped and appeared to have the legs on the trio behind as he managed to extend an advantage of a second, but disaster struck on the penultimate lap as the BMW 125i M Sport slowed off the Wilson hairpin.

Shedden duly inherited the lead, and while he faced a great deal of pressure from behind over the rest of that lap, he then pulled a gap between Riches and the run to the Wilson hairpin at the start of the final tour.

As Turkington harried Collard unsuccessfully for second, Shedden made a crucial break and maintained his lead to the finish to clinch his third win of the season.

The victory returns Shedden to the head of the drivers' standings.

"It just seemed so unlikely after yesterday," said Shedden, who had qualified 21st on Saturday.

"We've had our dramas and just had to plug away and plug away.

"The car was OK - it got a little bit lively towards the end but then they started squabbling." 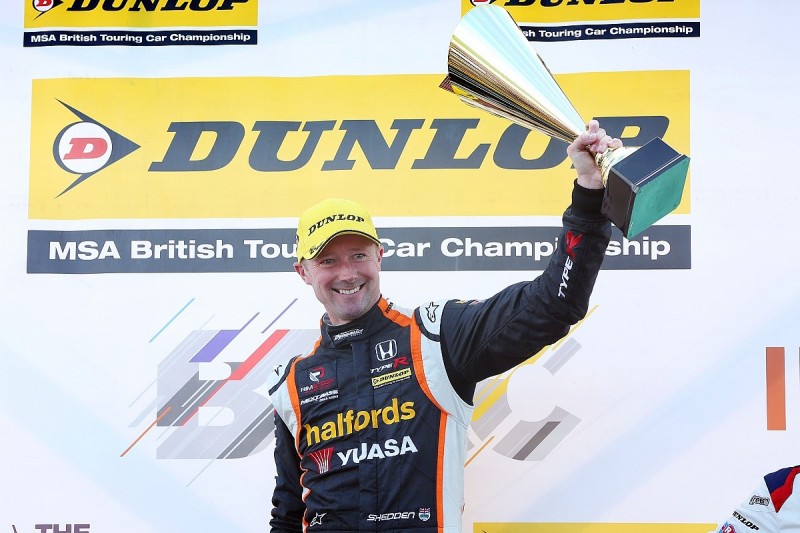 A lairy moment on the grass aside, Mat Jackson had a quiet but productive run to a second fourth-place finish of the day in his Motorbase Ford Focus, albeit finishing six seconds shy of third-placed Turkington.

Cole couldn't sustain a challenge at the front but still recorded his best finish in the BTCC in fifth, while Tom Ingram came out on top in a personal duel with the Team Hard Volkswagen CC of Jake Hill to claim sixth in his Speedworks Motorsport Toyota Avensis.

Team BMR's Ash Sutton had the led the championship before the third race thanks to two victories earlier in the day, but his final race lasted less than a lap after he was hit by Rob Austin at Oggies.

Shedden now leads the championship by two points from Turkington, with Collard the same gap back in third and Sutton fourth - 11 points adrift of the leader.