Bushell was second in the opening session in the morning, before eclipsing his time in the second period to clock a 56.423-second lap around the 1.64-mile track.

"The times are so close, so I am delighted to be at the front," he said.

"We have put the car back to where we had it at Rockingham [where Bushell took a pair of career best sixth place finishes] and it has worked straight away.

"We made some changes that didn't work throughout the sessions and we went back to where we started from because it worked so well.

"The car felt comfortable and we hope there will be a little more to come with a few things we can do to the car before the qualifying session."

Second overall after topping the morning's session was Tom Oliphant in his Ciceley Mercedes-Benz A-Class.

"I set the time this morning with the aid of a tow from another car, and I didn't get one in the second session - despite trying - so maybe that is the difference," he said.

"We put new tyres on and the car felt good, and we have done some long runs too." 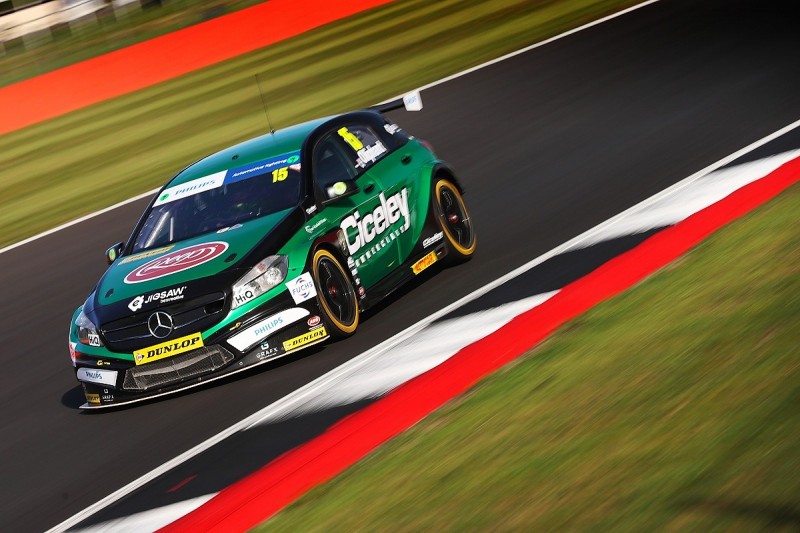 Andrew Jordan was fourth in the opening session and then second later on in his WSR BMW.

The 2013 champion, who is fourth in this year's points chase, said he was going to leave his car unchanged ahead of the afternoon's qualifying session.

"The car has been great, right from the start," he said. "There is no point changing too much because you aren't suddenly going to find a couple of tenths of a second around a track like this.

"It will be a question of keeping calm and keeping it all hooked up in qualifying, and that is what we need to do."

The HMS Racing Alfa Romeo Giulietta of Rob Austin was fourth in the overall times, ahead of the Eurotech Racing Honda Civic Type Rs of Brett Smith and Jack Goff.

Championship leader Colin Turkington's BMW 125i M Sport was fitted with the regulation 75kg of success ballast and he was 19th and then 23rd in the times, although the Northern Irishman said that he was just working through a programme ahead of the qualifying sessions.

His major title rival, Tom Ingram in the Speedworks Motorsport Toyota Avensis, was 12th and then 25th in the timesheets, struggling with understeer on the car which is fitted with 66kg of success ballast.

Third in the points is Ash Sutton, and he has 57kg on his Team BMR Subaru Levorg. He was 17th in the opening running, but couldn't match his time in the second session and slipped to 21st.