The race was shortened to 10 laps after a huge crash among the backmarkers on the opening lap.

Dan Welch (Proton) and Ollie Jackson (Audi S3) made contact on the back straight, and Hunter Abbott (Chevrolet) and Ash Sutton (MG) hit the spinning cars in the subsequent dust could. All drivers escaped injury.

That gave race one winner and polesitter Colin Turkington's Subaru a second chance to make a strong start, having ceded the lead to Mat Jackson's Ford Focus at the Wilson hairpin on the initial getaway.

But at the second time of asking, Turkington's advantage only lasted two corners further as Jackson, who had despatched front-row starter Gordon Shedden's Honda going around Riches corner on the opening lap, powered his car past Turkington coming out of the Agostini hairpin.

Jackson powered clear to victory from there, despite Turkington making a brief attempt to fight back towards the end of the race, to win by 1.190 seconds.

"The car was on fire - it was awesome," said Jackson. "I was pleased to get another go at the start and get in front again - I had hoped Colin Turkington hadn't worked out my plan.

"We had ballast on and we worked hard and took the win. I was keeping an eye on Turkington behind and then I was looking after my tyres. It is a credit to the team."

Behind Turkington in second place, there was chaos. Shedden shunted in to Turkington at the Wilson hairpin on lap two, which slowed both cars.

Turkington held on to second, but it marked the start of Shedden's drop down the order after further skirmishes on the way out of the corner with Adam Morgan's Mercedes.

Morgan got through and was forced to fend off the factory Honda Civic Type-R of Matt Neal, who eventually found a way past on lap five as Morgan then started to drop back.

Neal held on to third place over the closing stages despite coming under severe pressure from Rob Collard's BMW.

Morgan took fifth from Jason Plato's Subaru, which had fended off Tom Ingram's Toyota Avensis and Sam Tordoff's BMW 125i M Sport throughout.

Tordoff has been drawn on pole for the reversed grid finale. 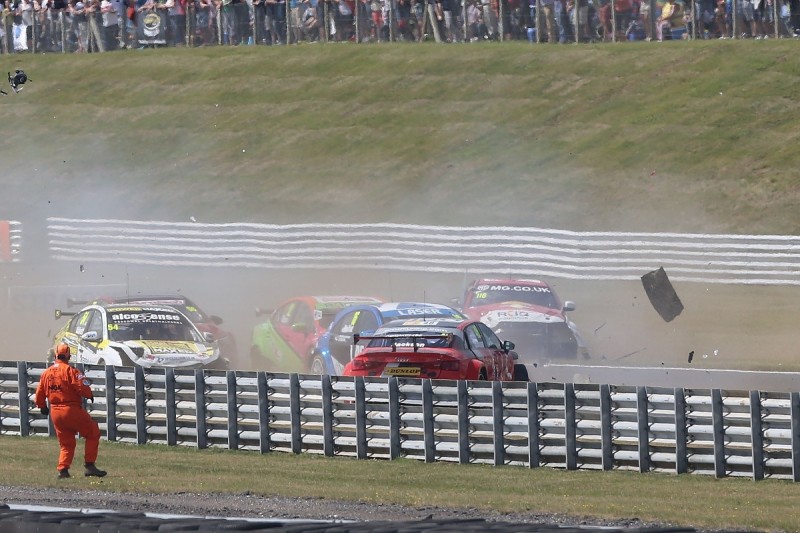