Polesitter Jack Goff (Eurotech Racing Honda Civic Type R) made a late call to swap to slick tyres in the drying conditions but was too late out of the pitlane, meaning he was forced to start from the back of the grid.

That left Sutton with a clear run to the opening corner and he capitalised, with Dan Cammish in his wheel tracks in the Team Dynamics Honda Civic Type R.

Sutton was able to control the pace but his five-second lead was wiped out by a safety car on lap 10 of 14.

By that stage, Cammish had come under pressure from the Power Maxed Racing Vauxhall Astra of Josh Cook, who pounced when the race went green again with two racing laps remaining.

Cook then set off after Sutton and put him under serious pressure over the opening two corners but failed to unseat the winner by 0.2s.

Reigning champion Sutton, who is now up to third in the points, was delighted: "The safety car certainly made life a lot harder for me. We are still lacking some performance in the car in the dry, and the circuit was getting better all the time in terms of grip.

"I knew that Josh was faster and he gave me a wake-up call. With another lap, I am not sure I could have held on to the win." 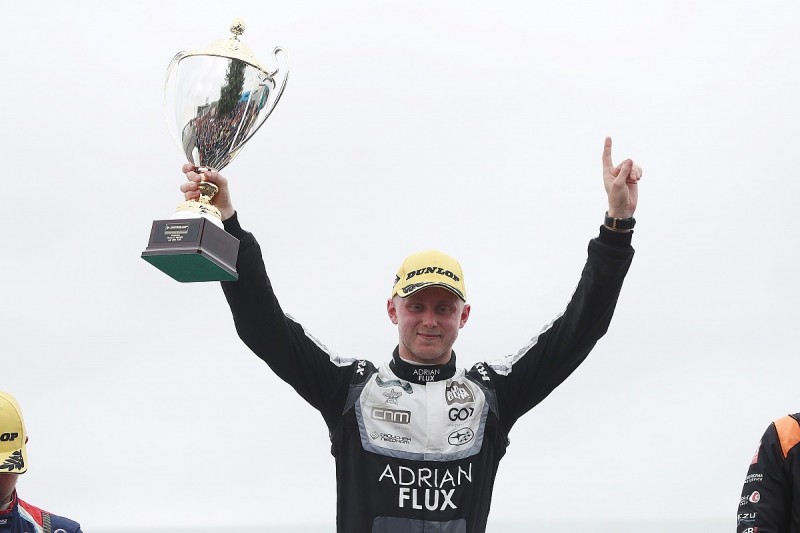 Cook had taken second from Cammish just as the safety car was deployed but said he wasn't sure if the move had been legal.

He explained: "I gave the position back and then went for it again when it went green - it wasn't worth risking anything for what was, at that stage, only a possible win and I had been unsighted. It was a great race though."

Cammish's grip on third came under pressure from the flying Tom Ingram (Speedworks Motorsport Toyota Avensis) on the last lap. Ingram had started in 27th place after an alternator failure in race one, but ran 12th after a barnstorming opening lap.

He picked off his rivals until he arrived on Cammish's bootlid, and then out-dragged him on the run out of the final corner to the line by just 0.04s to score an unlikely podium.

Chris Smiley had climbed to third place initially in his BTC Norlin Honda Civic but slipped back as the race progressed.

He held on to fifth behind Cammish by fending off a huge queue of cars, including Sam Tordoff (Motorbase Ford Focus), Senna Proctor (Power Maxed Vauxhall) and Tom Oliphant (Ciceley Motorsport Mercedes-Benz A-Class).

The top 10 was completed by Andrew Jordan's WSR BMW 125i M Sport and series returnee Ant Whorton-Eales in the AmDTuning.com MG.

Goff could only recover to 17th, but he was ahead of Matt Neal's Team Dynamics Honda, which had suffered early damage and a spin. He crossed the line in 21st position.

Title leader Colin Turkington, in his WSR BMW 125i M Sport, started 15th but was tapped off the circuit at the opening corner and sustained severe suspension damage as he rejoined, which ruined his charge.

His gap at the top of the table has now been slashed to four points from Ingram.

The third race of the day, the double points special celebration event, is due to take place at 1715hrs.

Goff is due to line up on pole ahead of Neal and Motorbase Performance driver Tom Chilton (Motorbase Ford Focus).